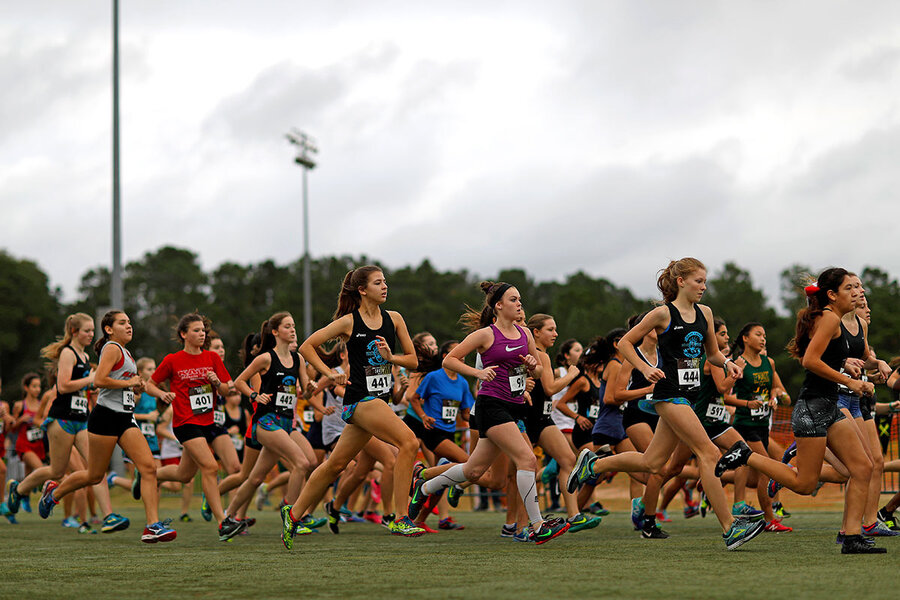 Circumstances dictated that we would do as he said, not as he did. Coach McGarry looked up the hill and asked, “How many can you do?” Four, I said. “Let’s make it 10,” he responded, with a conviction that I would come to know well in that first summer of running camp.

Mr. McGarry sat at the bottom of the hill, urging us to go faster. An explosion in the Vietnam War had left him in a wheelchair. He often coached us from his station wagon.

I was new to the rigors of running. Two suburban miles quickly gave way to 5 or 6; four repeats on the stairs became 12. Long workouts in the blazing summer sun began to include sprints. The workouts left our adolescent bodies taut, but our coach’s frequent homilies always focused on building character, not physical strength. At particularly strenuous moments, he’d tell us to dig deeper.

“You can always withstand more,” he told us as our chests heaved while we bent over our shoes. I can still hear him calling to me to stand up straight and accelerate into the hills.

Sometimes he would gather us together at the end of a grueling morning workout. He sat upright, his still well-
conditioned frame beneath a worn baseball tee drawing us to attention. We knew to expect only measured praise.

“Now is when you train yourselves to work through pain,” he’d say.

I left my home in Chicago for college in northern New England. I was a flatlander, now running in the first of many mountainous areas that I would call home. Running sustained me as the pedestrian challenges of college gave way to work in human rights in Haiti, whose scarred history is reflected in the oft-­repeated Creole proverb, “Dèyè mòn gen mòn” (“Beyond mountains, more mountains”), different kinds of mountains to be run. Later, my workouts would offer rhythm to the effort of reconstructing the health system of post-genocide Rwanda, land of a thousand hills. Occasionally, on my trips home, I would drive past the site of our hill workouts, my preparation for much steeper climbs.

For years I’d planned to write to Mr. McGarry and thank him for his positive impact on my life. But the exigencies of daily life distracted me. And then one day I learned that he had died unexpectedly. The news came at a particularly difficult moment for me. I was working to document the grisly aftermath of a coup in Haiti. The rapidly degenerating human rights and security situation had made running all but impossible. I felt adrift in the sea of moral ambiguity surrounding my work. Yet the news of his passing recalled for me his reservoir of strength and his frequent admonition to us to dig deeper within ourselves.

Three summers ago, I flew to Greenland, grappling with a personal decision that would mean the end of an important phase of my life. Greenland was, and is, facing a crisis of a much higher magnitude: Climate change is destroying traditional livelihoods of a population so dependent on ice for survival; communities are having to urgently create new ways of life.

Still out of shape from a long busy winter, I embarked on a run on the hills of Greenland’s capital, Nuuk. As I struggled up a hill, I looked out over the icy Arctic waters. Cold rain pattered on my exposed arms. I thought of Mr. McGarry.

That’s when I was struck by another, more important lesson he’d taught me. I had thought for so long that his legacy was simply the ability to endure physical pain, but now I realized that he was training us to change our lives, to create new narratives for ourselves. A devastating injury had left him unable to run, but he managed to influence another generation of runners as a coach.

As in running, so in life: I leaned into the hill and found my way to the other side.