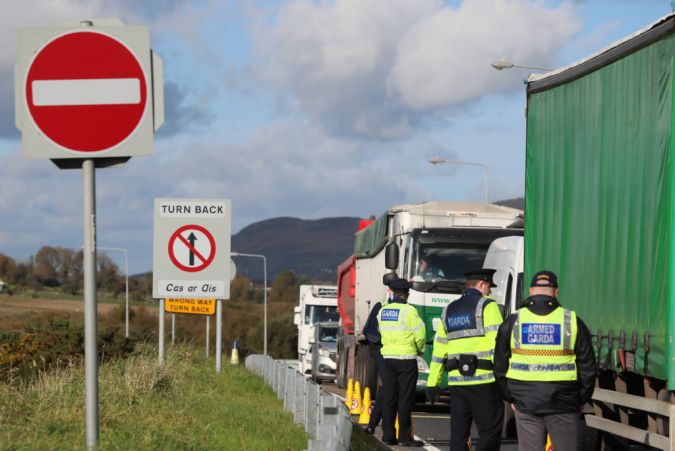 Cars and lorries queue at the border crossing between Northern Ireland and the Republic of Ireland during the Covid-19 pandemic. Photo: PA Wire.

All scenarios are being extensively considered as the deadline for sealing a Brexit transition deal looms, the UK Government has said.

Contingencies around Northern Ireland have been given a lot of thought but the priority is securing a deal with the EU by the end of the year, Northern Ireland Office (NIO) minister Robin Walker said.

Cross-Border cooperation with the Republic of Ireland on policing, security and criminal justice is a major factor for the authorities.

“Our focus should be on achieving that mutually beneficial outcome. A lot of thought has been given to what we will need to do in all scenarios.”

UK and Irish citizens have the right to work, study and move freely in each other’s country.

That didn't change when we left the EU and won't change at the end of the #transition period.

He was giving evidence to the Northern Ireland Affairs Committee of MPs at Westminster, addressing the extradition of suspected criminals across the Irish border and any alternative mechanisms.

Senior NIO official Mark Larmour said there was good cooperation between the authorities in tackling organised crime, adding: “We have some confidence around the working relationship.”

Extra money has already been granted to the Police Service of Northern Ireland (PSNI) by the UK Treasury to support its preparations for Brexit.

That has allowed the recruitment of hundreds of extra officers and staff.

A funding bid for a three-year plan for costs around the Northern Ireland Protocol has been submitted to the Treasury.

The protocol is due to come into effect from the start of next year and would keep Northern Ireland in line with some EU regulations on the single market to allow an open border and free flow of goods and services across the island.

Mr Walker supported the establishment of an independent fiscal council to give the Treasury confidence it was achieving value for money from bids for additional money from Stormont.

He said: “It would lend credibility to all bids to the Treasury and make clear where money has been spent, where it has not been spent and where we can ensure that money being asked for from the UK Government is providing extra value.”

An independent fiscal council was part of the New Decade, New Approach deal which restored devolved powersharing in Belfast earlier this year.

It is designed to prepare an annual assessment of the Executive’s revenue streams and spending proposals and how these allow ministers at Stormont to balance their budget.

Under the agreement it was due to be established by July.