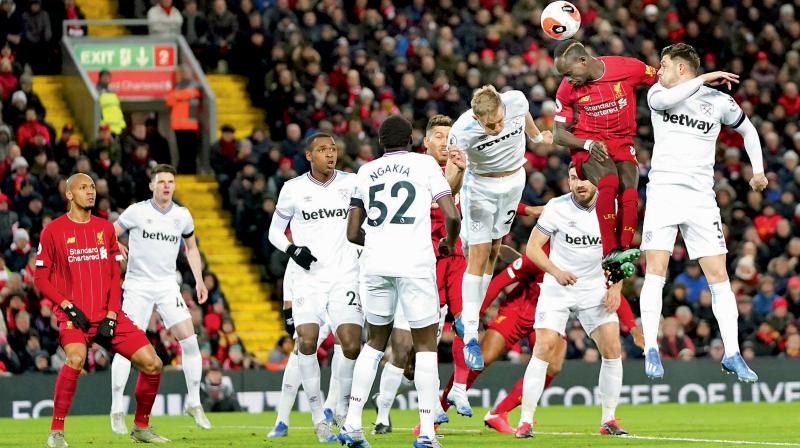 London: Will Liverpool get the chance to end their long wait for the Premier League title or will there forever be an asterisk against a season that remains unfinished due to coronavirus?

Premier League stakeholders are meeting on Friday to discuss the way forward, with widespread speculation over a potential June 8 restart.

With the Dutch Eredivisie already called off and the Belgian season in the balance, there have been calls for the English top-flight to draw a line under the season.

But the clubs remain committed to ending the 2019/20 campaign and there are compelling financial and legal ramifications to playing the remaining 92 games.

AFP Sport looks at both sides of the debate:

Find a way to finish

Since the Premier League was suspended on March 13, English clubs have endured a torrid time, with controversies over pay cuts and players breaking social-distancing rules tarnishing the brand.

Getting the focus back on football would be a welcome boost for the league, as well as fans who would embrace the diversion offered by the return of matches.

If that is not possible, leagues were urged to find ways of restarting "with a different format", which could mean play-offs in some cases.

British Prime Minister Boris Johnson has reportedly been briefed on a potential plan for fixtures to be played behind closed doors.

And in a sign that Premier League teams are gearing up for a potential return to action, Arsenal, Tottenham, West Ham and Brighton have allowed players to return to individual training.

"Although some leagues can end right away, others can start sooner. I know almost every country in the world has the Premier League as one of the leagues to watch so it is major that we can finish the season."

As manager of Dutch club Den Haag, who were spared relegation, former Newcastle and Crystal Palace boss Alan Pardew has a unique perspective on the issue.

He believes the English top tier will be played to a finish to avoid costly court battles.

"The TV rights situation is much more problematic in the Premier League. If you bring in the same model (as the Netherlands) you will end up with huge court cases," Pardew told the Daily Mail.

"From the managers, chairmen and chief executives I've spoken to in the Premier League, it seems they are determined to finish the season, subject to that being allowed by the government."

Given the devastating loss of life and economic damage caused by the virus, making sport a priority is a controversial move.

Clubs cannot guarantee players' safety and fears have been voiced that even if matches take place behind closed doors, fans could gather outside stadiums, breaking social-distancing rules.

Former Liverpool and Tottenham midfielder Jamie Redknapp said he did not see much sense in playing into July or August and delaying the next campaign.

"If the season's not completed by the end of June we need to look at the options and just look forward to next season," he said.

If this season cannot be finished, then the thorny subject of how to decide the issues of the title, European places and relegation will have to be resolved.

The null-and-void option would be doomsday scenario and is certain to enrage clubs and fans, with Jurgen Klopp's Liverpool on the brink of their first league title since 1990.

Manchester United, Wolves, Sheffield United and Tottenham, all currently outside the top four, would surely claim they had been unfairly denied a chance of Champions League qualification.

Aston Villa would be relegated along with Norwich and Bournemouth, but Dean Smith's Villa could point to the game in hand that could have lifted them above Watford to safety.