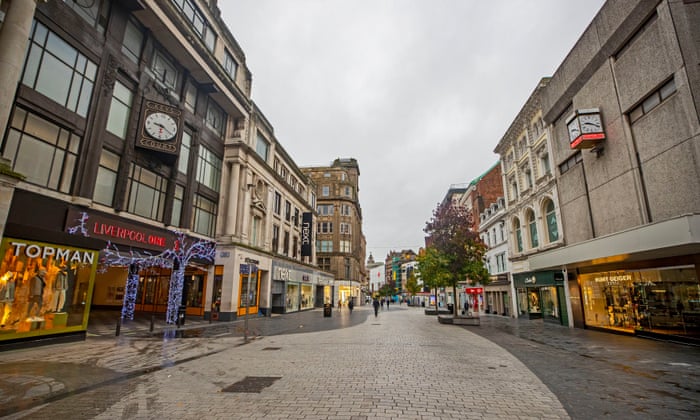 Liverpool will receive about half the support given to Kent or the Isle of Wight for the period spent in the highest coronavirus restrictions, analysis of a Treasury business support scheme has revealed.

The shadow chancellor, Anneliese Dodds, will call for an expansion of the support for areas with the strictest curbs when the final details of the tiered system are released on Thursday.

Councils in tier 3, where bars, pubs and restaurants must close, face the prospect of having to stretch the Treasury’s Additional Restrictions Grant (ARG) until March next year.

The ARG is a one-off allocation of £20-per-head of population in England, which the Department for Business, Energy and Industrial Strategy (BEIS) has confirmed will not be topped up and can be used till the end of the 2022 financial year.

It is available for local councils to distribute if businesses can prove restrictions have severely damaged their revenues and enables them to provide discretionary grants as well as fund wider support measures.

Labour said more support should be paid retrospectively to areas like Liverpool and Greater Manchester – which entered the highest restrictions weeks before the national lockdown – to make up for the shortfall in the ARG payment compared with tier 1 areas.

The analysis of the per-person ARG package found it will be worth £5.19 per week of restrictions for Kent or the Isle of Wight, but just £2.86 per week in Liverpool and £3.50 in Greater Manchester.

The government has indicated vast areas of the country are likely to be placed in the two highest tiers but no further support through this particular package has been announced for areas in tier 3, which involves only a slight easing of restrictions compared with a full lockdown.

Dodds said: “It is grossly unfair that local businesses in Liverpool and Greater Manchester are set to lose out compared with areas of the country which have spent less time in restrictions. Yet again, the Conservatives are forgetting the north.”

Dodds says the discrepancy would be “a kick in the teeth” for businesses that had faced constant changes to their plans because of the resurgence of the virus. “For every day that they are in the highest tiers after 2 December, they will be having to make that money stretch further,” she said.

“It’s time the chancellor set out a plan to address this injustice, with additional support for areas placed back into tier 3 and retrospective funding for those businesses that have already had to make this money stretch further than it should.”

A BEIS spokesperson said the analysis “fails to take into account a host of other support measures that are available right across the UK”.

The Treasury has said support is still available through a separate rolling fund in England, the Local Restrictions Support Grant, which applies to local authorities in tiers 2 or 3 and renews every 28 days that an area is in those tiers. It is intended to support hospitality, accommodation and leisure businesses that have been hardest hit by the restrictions imposed to combat the pandemic, though not forced to close.

Businesses in tier 2 and tier 3 that are forced to close can directly receive up to £1,500 every two weeks.

The BEIS spokesman said: “We understand the pressure businesses are currently under and have acted to support them through the pandemic with a £280bn support package, which is among the most generous in the world.”

The government has also announced plans to increase a separate pot for councils for public health measures, the £8-per-head Contain Outbreak Management Fund, which will receive an additional £900m.