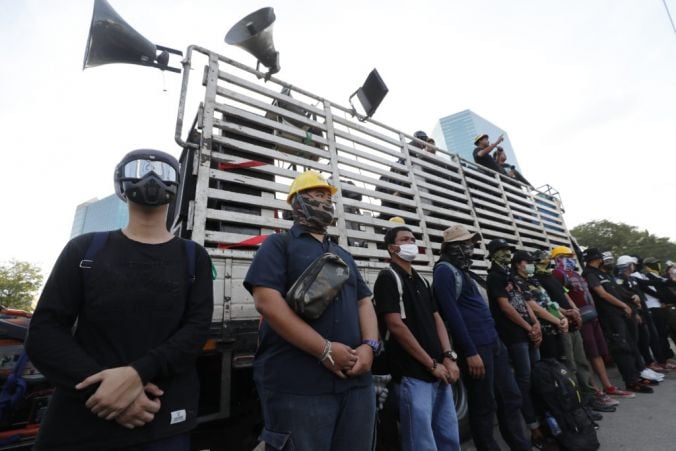 Pro-democracy demonstrators in Thailand again took to the streets of Bangkok on Wednesday, even as the government escalated its legal battle against them.

On Tuesday, police had issued summonses for 12 protest leaders to answer charges of lese majeste, defaming or insulting key members of the royal family.

The offence is punishable by up to 15 years in prison, with most of the protest leaders are already facing multiple charges, ranging from blocking traffic to sedition.

The lese majeste law is controversial, because anyone – not just royals or authorities – can lodge a complaint, so it had in the past been used as a weapon in political vendettas.

But it has not been employed for the past three years, after King Maha Vajiralongkorn informed the government that he did not wish to see its use. The king has not publicly commented on the law since then.

The protesters want the monarchy reformed to make it more accountable. They also want Prime Minister Prayuth Chan-ocha and his government to step down, and for the constitution, which was implemented under a military government, to be amended to make it more democratic.

Several of the leaders wanted by the police were present on Wednesday as protesters gathered in a carnival-like atmosphere next to a bank controlled by the country’s royal family.

The rally was peaceful but less than two hours after it was declared over and many in the crowd were lingering, a man was shot and wounded, according to initial reports of emergency service personnel and witnesses’ accounts and photos posted on social media. It was not clear whether the attack involved a personal dispute or politics.

Many in the months-long protest movement, spearheaded by students, believe the monarchy holds too much power for a constitutional monarchy. But their challenge is fiercely opposed by royalists, including the army, who consider the royal institution an untouchable bedrock of national identity.

During the protest, accessories featuring the image of a yellow rubber duck, a movement icon, could be seen almost everywhere. One protest leader even gave a speech while wearing a duck costume.

The ducks became a symbol of resistance last week when human-size inflatable ducks were brought to a rally outside Parliament and satirically dubbed the protesters’ navy. When police turned water cannons on them, the ducks served as makeshift shields.

At a ceremony at a park in another part of Bangkok, at least 600-700 supporters of the monarchy gathered for a scheduled appearance by the king. He and Queen Suthida have recently been doing street tours where members of the public can see them face to face, an evident attempt to shore up support for the royal institution.

The venue for Wednesday’s pro-democracy rally was changed on Tuesday, with the protest movement announcing that the change of venue was to avoid a confrontation with police and royalist counter demonstrators, which they said they feared could trigger a declaration of martial law or a coup by the military.

A protest rally outside Parliament last week turned chaotic as police fired water cannons and tear gas at the protesters. At least 55 people were hurt, including six reported to have had gunshot wounds. Police denied firing live rounds or rubber bullets.

The next day, several thousand demonstrators gathered outside the national headquarters of the police in central Bangkok to protest against the force used against them.

That rally was non-violent but fuelled royalist outrage at the protest movement, as demonstrators defaced the “Royal Thai Police” sign outside its headquarters and scrawled graffiti and chanted slogans that could be considered derogatory of King Vajiralongkorn.

Protest leaders remained defiant even after being told they were facing lese majeste charges, declaring they would have four more straight days of rallies to pressure the government.