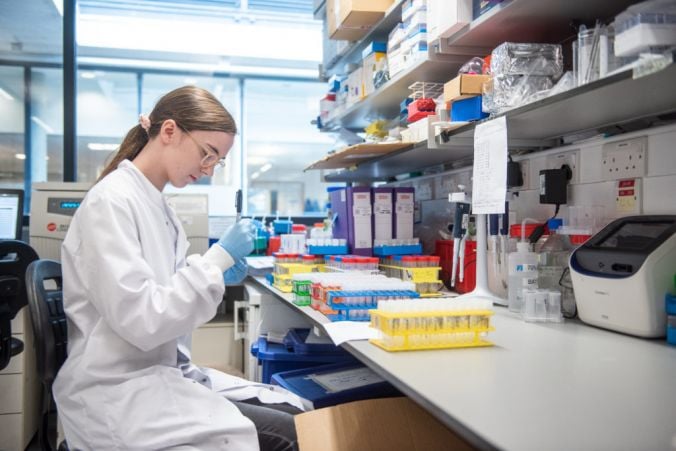 A researcher in a lab at Oxford University, © PA Media

The dose of AstraZeneca and Oxford University’s Covid-19 vaccine that was shown to be 90 per cent effective was only tested in people aged 55 and under, according to a US official.

Moncef Slaoui, the scientific head of the US’s Operation Warp Speed – the programme to supply America with vaccines – told US reporters that the half-dose regime, which was discovered by accident, was only given to younger age groups.

Scientists across the globe are hoping to find vaccines that work in older people, who are most at risk from Covid-19.

Oxford’s overall efficacy from two different dosing regimes in a phase three trial was announced last week at a combined figure of 70 per cent.

A half dose followed by a full dose was found to be 90 per cent effective according to a subset of data, but efficacy was 62 per cent for people given two full doses.

Results from an earlier phase two study of the vaccine published in The Lancet medical journal showed the vaccine produced a strong response in all age groups.

Professor Andrew Pollard, director of the Oxford Vaccine Group, told reporters at a UK-based press briefing last week that the 90 per cent effectiveness finding had already met the “necessary statistical evidence as required by regulators”.

The 90 per cent efficacy was based on a dosing regime given to 2,741 people. The other regime involved 8,895 people.

Neither AstraZeneca nor Oxford disclosed at the briefing that the 90 per cent figure was based on adults aged 55 and under.

It comes as some US scientists have questioned a lack of detail in the results put out last week by AstraZeneca and Oxford.

The New York Times reported that AstraZeneca’s Menelas Pangalos has defended the company’s handling of testing and its public disclosures.

He said the error in the dosage was made by a contractor, and that, once it was discovered, regulators were immediately notified and agreed to continued testing of the vaccine in different doses.

Asked why AstraZeneca had not shared the information with the public, he said: “I think the best way of reflecting the results is in a peer-reviewed scientific journal, not in a newspaper.”

Some experts have also raised questions about the use of two differently designed clinical trials in Britain and Brazil, and pooling analysis from both.

They also say it is unclear how many coronavirus cases were found in each group of the trial.

In an interview with the New York Times, Mr Pangalos said the half-dose finding “could end up being quite a useful mistake”.

Mr Pangalos said the company is planning a global trial with thousands of people to compare the two dosing regimes.

The Oxford vaccine is inexpensive at only £2 to £3 (€3.37) per dose and can be much more easily stored than vaccines from Pfizer/BioNTech and Moderna, which require very cold temperatures.

The jab is currently being assessed by the Medicines and Healthcare products Regulatory Agency (MHRA) for use in the UK.

Oxford University said it would not comment ahead of the data appearing in a peer-reviewed publication.

But in a statement to PA it said: “During the phase three trials, our UK study used two dose levels.

“The initial dose selection, which was agreed with regulators, was based on the same measurement of the concentration (using spectrophotometry) used in the phase one study, but, as a result of a difference in the manufacturing process for the later study, this method was subsequently shown to over-estimate the dose on the new batches of vaccine, resulting in a half dose of the vaccine being administered as the first dose.

“We have different ways of measuring the concentration of the vaccine and, when it was apparent that a lower dose was used, we discussed this with the regulator, and agreed a plan to test both the lower dose/higher dose and higher dose/higher dose, allowing us to include both approaches in the phase three trial.

“The methods for measuring the concentration are now established and we can ensure that all batches of vaccine are now equivalent.”