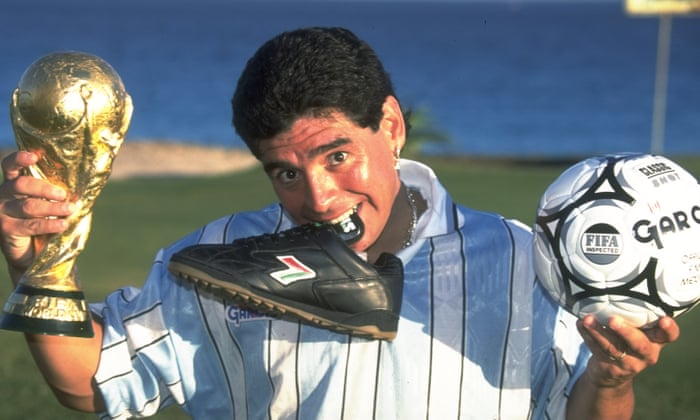 1) Diego Maradona, one of the greatest footballers of all time, died on Wednesday aged 60. It’s hard to know where to begin, but let’s start with five of his greatest World Cup goals. No 1 on that list, the ‘goal of the century’, inspired some memorable commentary from Barry Davies – “you have to say that’s magnificent” – Argentina’s Victor Hugo Morales going loco and a concise effort from RTÉ’s Jimmy Magee.

The assists weren’t bad either: this one, to Jorge Burruchaga, won the World Cup and four years later he dissected the Brazilian defence. Here are more of El Diego’s World Cup highlights, and the epic post-match celebrations in 1986. Gary Lineker paid a fantastic tribute to Maradona on BT Sport, highlighting what made him so unique. And here is the England striker being shown round La Bombonera in 2007, plus a 2006 meeting with Diego, who seems genuinely pleased to see Lineker and wasn’t shy about mentioning ‘that’ goal from 1986.

Maradona will forever be associated with Napoli and Naples, and rightly so: here are all his 81 goals in Serie A – part one and two – which helped lead the southern club to their first ever Scudetto. But, of course, he is also revered at home. Maradona broke through at Argentinos Juniors (1976-81) before two stints at Boca Juniors which bookended the rest of his career. He would regularly attend matches there in his retirement in his personal box, which was the subject of Boca’s tribute to the great man.

2) With England losing 23-22 in overtime, Emily Scarratt stepped up to win it with a nerveless penalty against France. The full highlights are well worth a watch. For the men’s team, Jonny May scored an incredible solo try in England’s Autumn Nations Cup in Saturday’s defeat of Ireland.

3) Jonty Rhodes, Paul Collingwood and … Dele Alli? The Tottenham midfielder showed some incredible ingenuity as he mixed football and cricket to take a fine catch during a session of office cricket at the Tottenham training ground.

4) It is the Bahrain Grand Prix this weekend. Lewis Hamilton has already won the 2020 championship, so there is not much to race for. The track has seen a few dramatic moments down the years, though.

5) Eastern Europe was a hotbed of top quality goals last week. First there was this master blaster in Bulgaria, caught on CCTV. Then there was a scorpion kick in Romania which was ruddy impressive. Gheorghe Hagi will be proud. Back in Blighty, Danny Rowe smashed one in from Downtown. For balance, this is what happens when penalty spots go wrong and goalkeepers forget how to kick a ball.

6) The new Football Manager was launched this week, leading to numerous childhood memories of signing the same three wonderkids in every game to launch Barnsley to European glory. However, a lot of those young lads could not mirror their simulated success in real life. Cherno Samba’s career never really got going, as this ITV interview ascertained; Gai Assulin is currently not getting a game in Romania but he did score a nice goal for Sabadell in the Spanish third tier a few years ago; Freddy Adu was set to be the first America star in the world of football; he was dubbed the ‘New Pele’ but a mediocre spell at Benfica was as good as it got. And Kerlon will always have his seal dribble, at least.

7) Chelsea welcome back Tottenham and José Mourinho to Stamford Bridge this week. Back in 2016, the two clubs enjoyed a ‘physical’ encounter that handed Leicester the title. On this occasion, one would hope Eric Dier is fully prepared to complete the 90 minutes unscathed.

2) Masters? More like Worsters. Hey! Is this thing on?

3) Frankly, that has gone very badly.

5) Onboard with Jim Clark.