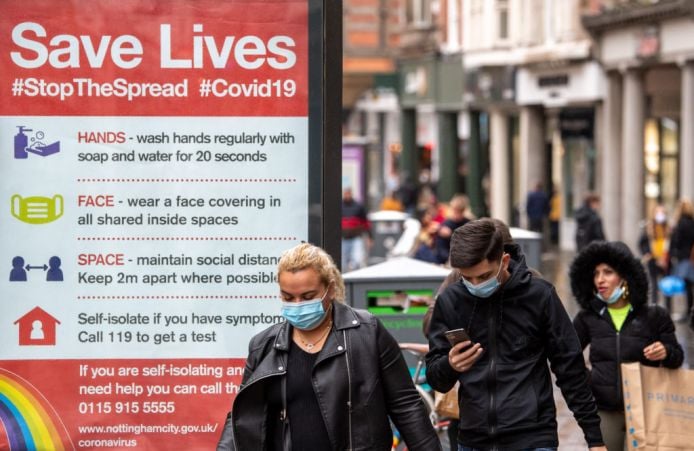 Almost all parts of England will face tough coronavirus curbs, with a ban on households mixing indoors and restrictions on hospitality after December 2nd.

Only the Isle of Wight, Cornwall and the Isles of Scilly have been placed in the lowest Tier 1 set of restrictions, with people in all other parts of England set to face more serious measures.

Large swathes of the Midlands, North East and North West are in the most restrictive Tier 3, but London will be in Tier 2.

Liverpool, which had been in Tier 3 before the lockdown, will move to Tier 2 in recognition of efforts to curb the spread of coronavirus.

UK Health Secretary Matt Hancock said “these are not easy decisions, but they have been made according to the best clinical advice”.

He told MPs: “Thanks to the shared sacrifice of everyone in recent weeks, in following the national restrictions, we have been able to start to bring the virus back under control and slow its growth, easing some of the pressure on the NHS.

“We will do this by returning to a regional tiered approach, saving the toughest measures for the parts of the country where prevalence remains too high.”

The chaotic handling of the announcement saw an online postcode checker allowing people to check which tier their area would be in launch before the official details were released. However, it soon crashed.

In Tier 1, the rule of six applies indoors and outdoors, people are urged to work from home if they can, and pubs are limited to table service.

The majority of England will be in Tier 2, where the restrictions mean a ban on households mixing indoors and pubs, and restaurants only able to sell alcohol with a “substantial meal”.

Tier 3 measures mean a ban on households mixing, except in limited circumstances such as parks.

Bars and restaurants will be limited to takeaway or delivery services and people will be advised to avoid travelling outside their area.