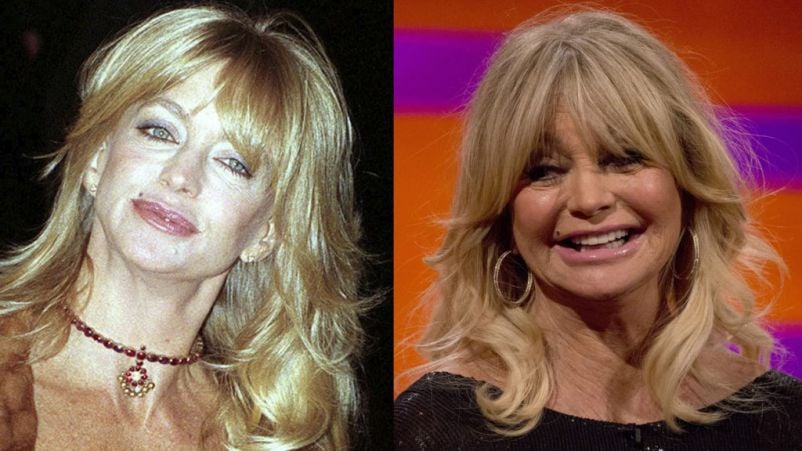 One of Hollywood’s most beloved stars, Goldie Hawn is famous as much for her acting talents as she is her vivacious personality.

It’s hard to believe the bubbly blonde celebrates her 75th birthday on November 21 – she looks as glamorous now as she did when she began her career more than 50 years ago.

Here, we look back at how Hawn’s style has evolved throughout the decades…

After starting out in TV, Hawn’s breakthrough role came with the movie Cactus Flower, for which she won the Oscar for best supporting actress in 1970.

During the Seventies, she tried out a variety of trendy hair styles, her ash blonde locks chopped into a shorty, shaggy cut or piled high into a Brigitte Bardot style bouffant.

Hawn seemingly took inspiration from another icon of the times, British model Twiggy, with her thick, spidery eyelashes and pale lipstick.

Hawn really hit the mainstream in 1980 with Private Benjamin, the comedy becoming a huge box office hit. In 1983 she began dating fellow actor Kurt Russell – the couple are still together today.

By the mid-Nineties, after starring in cult comedy classics like Death Becomes Her and The First Wives Club, Hawn had settled on the hairdo that’s still her signature today: messy, honey blonde waves and a choppy, face-framing fringe.

Leaving behind all that Eighties excess, the actor adopted the decade’s trend for more pared-back fashion, but still had a penchant for sparkles on the red carpet.

In the Noughties, Hawn started appearing on the red carpet alongside lookalike daughter Kate Hudson, who embarked on her own acting career and shot to fame with the film Almost Famous in 2000.

While some actors become trapped, style-wise, in the era in which they become famous, Hawn has managed that rare feat: maintaining her signature look while also moving with the times.

Still looking gorgeous with her iconic blonde locks, the Hollywood legend has toned down her style, swapping low-cut and clingy dresses for demure gowns with just a hint of sparkle.

Five decades of acting success, great hair and fashion fabulousness – Goldie Hawn is an inspiration to us all.