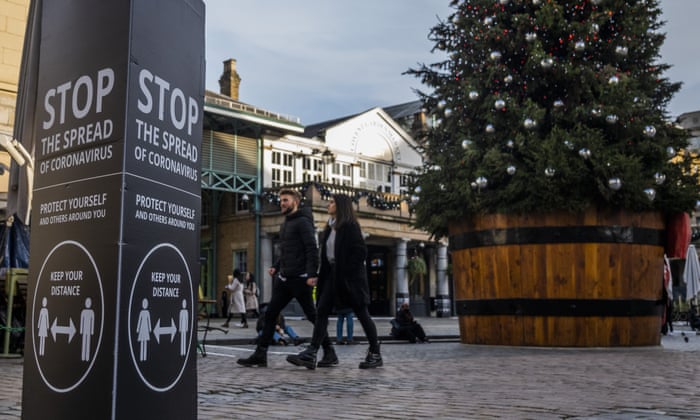 On Thursday, ministers set out the places in England where millions of people will face stricter Covid restrictions when lockdown ends on 2 December.

So how will they work?

You are one of the very lucky ones. The only locations falling into this least restrictive tier, living under what the government terms as “medium alert”, are the Isle of Wight, Cornwall and the Isles of Scilly.

People can mix socially between households indoors but must abide by the “rule of six”. Hospitality businesses, such as pubs, restaurants and bars, can operate until 11pm with table service only, a tweak from the previous rules, but last orders must be made by 10pm. People are being encouraged to minimise travel and work from home where possible.

Spectator sport is set to resume, albeit with limits on numbers and abiding by social distancing. In tier 1, there will be a maximum crowd capacity outdoors of 50% of normal stadium occupancy or 4,000 people, whichever is smaller. Indoors, the maximum capacity is 1,000.

What about tier 2: will the pubs be open?

More than 32 million people in England – or 57.25% of the population – including those living in London’s 32 boroughs, will fall into the “high alert” tier 2. Liverpool city region, York, North Yorkshire, Cambridgeshire, Norfolk, Essex, East Sussex, Surrey, Oxfordshire, Dorset and Devon are among other locations in tier 2. A full list of places can be found here.

As before, social mixing outside of households or support bubbles will not be allowed indoors. The rule of six will apply outdoors, including in gardens and public spaces. Although hospitality venues will be allowed to stay open until 11pm – with last orders at 10pm – only those that serve food can operate, and they can only serve alcohol with a substantial meal.

It means pubs and bars that do not serve meals will have to close.

Spectators will be allowed to watch sport, but with a maximum crowd outdoors of 50% of the stadium’s capacity or 2,000 people, whichever is smaller. Indoors, the maximum capacity is 1,000.

This is the toughest tier. Two in five people in England, representing more than 23 million, will have to live under the country’s most restrictive tier. Like tier 2, people are not allowed to mix socially indoors with other households, unless it is with their support bubble. Up to six people can meet outdoors in some public places, such as parks, but not private gardens.

Hospitality venues will have to close, except for delivery and takeaway service. In tier 3, hotels and other accommodation providers must also close, except for specific work purposes where people cannot return home. Indoor entertainment venues, such as cinemas, casinos and bowling alleys, must also close. Unlike the first two tiers, spectators will not be allowed to watch sport in tier 3.

What is the same across all tiers?

Schools, universities, colleges and nurseries all stay open. Everyone who can work from home should, the government says, but where people cannot they should continue to go in.

Essential and non-essential retail, including indoor and outdoor markets, as well as car boot sales, are allowed to open.

Organised outdoor sport, physical activity and exercise classes can take place in all tiers. However, the government has added a caveat in tier 3, saying: “higher-risk contact activity should not take place”. Gyms, sports courts and facilities, leisure centres, fitness and dance studios, swimming pools, riding centres and outdoor playgrounds can also open. Indoor group activities and classes are not allowed in tier 3. There are exceptions for indoor disability sport, sport for educational purposes, supervised sport and physical activity for under-18s, the government says.

Personal care and close-contact services – such as hairdressers, beauty salons, tattoo parlours, nail salons, spas and beauty services, massage parlours and tanning salons – are also allowed. Collective worship and weddings – with a maximum of 15 in attendance – can also resume, although wedding receptions are not permitted in tier 3.

Can I travel between tiers?

If you live in tier 1 and travel to a higher tier, the government states: “you should follow the rules for that area while you are there”.

But it would rather you didn’t travel to areas with more virus.

“Avoid travel to or overnight stays in tier 3 areas other than where necessary, such as for work, education, youth services, to receive medical treatment, or because of caring responsibilities. You can travel through a tier 3 area as part of a longer journey,” the government advice says.

If you live in a tier 2 area, the government says “you must continue to follow tier 2 rules when you travel to a tier 1 area”. It says people in tier 2 must also avoid travel to or overnight stays in tier 3 areas other than where necessary.

For those living in tier 3, the government states people should “avoid travelling to other parts of the UK, including for overnight stays other than where necessary”.

Asked specifically whether someone living in tier 3 can go on holiday in a lower tier, the Department of Health and Social Care told the Guardian: “In tier 3 the government strongly advises against travel and overnight stays in/out of the area, other than for reasons like work or education. This means that holidays – including internationally – are advised against, but are not prohibited.”

How will the new rules be enforced?

Pressed on this point by the Guardian, the DHSC pointed out that police and local authorities had been given £60m in additional funding in October to “step up their enforcement and compliance activities”, saying it would help the police to increase patrols, to enforce rules and “deploy to high-risk areas for targeted policing where there is a rising concern”.

A spokeswoman added: “And just as we’re supporting the police, we want to see local enforcement teams using the full weight of the new rules and regulations – and environmental health officers and trading standards officers should be using their powers to ensure businesses who are breaking the rules feel the full force of the law, working with the police where necessary.”

These rules affect England: are there different rules for the rest of the UK?

Yes. Scotland, Wales and Northern Ireland, which have their own powers to set Covid-19 restrictions, have their own rules. Scotland, for example, has a five-level system of restrictions. Earlier this month, more than 2 million people in 11 council areas across western and central Scotland, including Glasgow, moved into level 4, the toughest category where non-essential shops, hospitality and gyms are all forced to shut. Level 4 restrictions will be lifted on 11 December. In Wales, where restrictions were eased on 9 November after a firebreak lockdown, two households have been able to form a bubble, and pubs, bars, restaurants and gyms are among businesses allowed to operate. Northern Ireland will go into a two-week circuit-breaker lockdown – including closure of non-essential shops, as well as a ban on households mixing socially indoors unless an exemption applies – from 27 November.

Isn’t there going to be a relaxation of restrictions for Christmas?

Yes, there will be a temporary let-up in restrictions across the UK to allow people to form bubbles of three households over Christmas so they can celebrate the festive season together. Restrictions will be lifted for a five-day period between 23-27 December so that people can mix indoors and stay overnight. In Scotland, a maximum of eight people will be allowed but that does not include under-12s. In Northern Ireland, the window has been extended to 22-28 December to allow for additional travel time between countries.