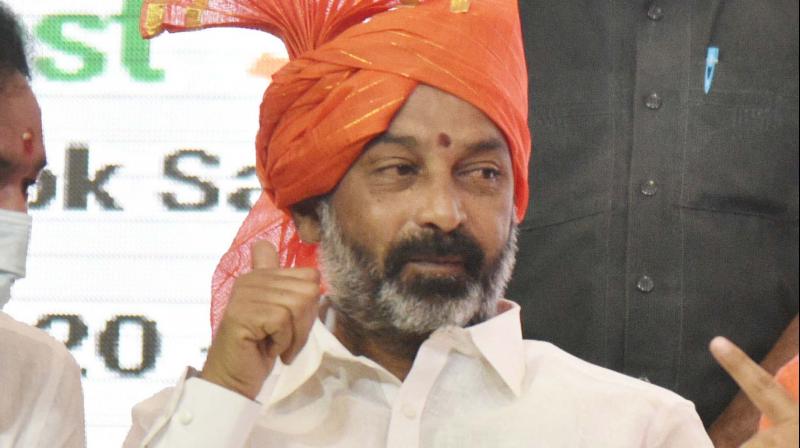 Hyderabad: The phrase, ‘surgical strikes’, has set off a debate laced with sarcasm and brimming with anger in one section of the people, particularly the Muslim community.

On the other side, people are delighted because they feel it is high time this issue was brought to the fore and discussed openly, and an end be put to the stay of illegal immigrants from the Rohingiyas to the Pakistanis and Bangladeshis, especially in the Old City.

The phrase was used by BJP state president and Member of Lok Sabha, Bandi Sanjay, when he said that if the saffron party win the GHMC elections and has its mayor, they would conduct a ‘surgical strike’ against the illegal immigrants.

“Use of a phrase like surgical strike is not right as Hyderabad is a multicultural and harmonious city. The intent was towards illegal immigrants, but it has been wrongly worded,” said several people critical of the phrase.

Rushab Shah, an event manager, said, “the intent behind the statement was well-placed as there is a need to reduce the number of illegal immigrants in India. However, the term surgical strike is not right. Maybe if they use the right words to make their point, it will help them gain confidence of more people.”

Questions, counter-questions, arguments and counter-arguments, with underlying emotions of livid anger and disapproval, or ecstasy and excitement is palpable across living rooms to public places, as people continue to discuss it on open social media like Facebook or closed ones like WhatsApp.

Some argue that if the Greater Hyderabad Municipal Corporation (GHMC) elections are about good civic governance, why the contentious issue of illegal immigrants was being made a part of it. Some wonder what has civic elections got to do with terrorism, illegal immigration, crime, and law and order in the city.

Beyniaz Edulji, a gardening enthusiast, says, “I will vote for good governance. What is the contingency plan for disasters like the recent Hyderabad floods? Talks of surgical strikes hold no water with people like me, who are concerned about ground reality.”

“Why is no one addressing the issue of recent floods? Did the central government give flood relief money to the state? Will BJP central leaders campaigning for votes in GHMC elections go around lake areas and see the situation of people there? Is any leader willing to address the issue of encroachment of lakes and rivers under the TRS rule? Are any of them willing to come out with a concrete solution for future problems of climate change and city infrastructure?,” Edulji said.

Several women were upset with the comments, saying that Hyderabad is a city of culture and tehzeeb, which the Old City symbolizes. Arnaz Bisney, entrepreneur, says, “Hyderabad is not only about biryani and pearls but warmth of its people, it’s mehmaan nawazi. We Hyderabadis live together in harmony. It is not something politics can break so easily.”

Those who volunteered to work during the floors claim they are very angry over the “discrimination meted” out by the TRS leaders and others over targeting Old City.

Farhana Khan, owner of a budgeted school in Secunderabad, says, “why are those spreading hatred not made accountable? Votes in the name of religion must be banned. We need civic issues to be resolved.”

Some people allege that the police machinery and state government is aware of the presence of illegal immigrants in Old City but have done nothing about it. These immigrants settle in these parts and then move to other parts of the city, creating law and order issues. Hence, attempts to bring out these facts as is being done by the BJP is very necessary.

Pradeep Kumar Dutt of TS Hotel Association, said, “Everyone is aware of the presence of illegal immigrants. They stay in the city because of the support network available. It is high time action is taken against them.”