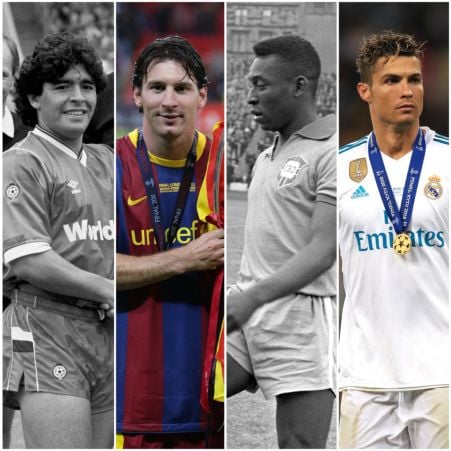 Among the grief and adulation expressed after Diego Maradona’s death, an age-old debate of who was the game’s greatest player has been reignited.

The discussion has been held many times before, and will no doubt be raised on many more occasions in the future, but the loss of the masterful Argentina forward aged just 60 has only intensified his claim to the throne.

In truth it is an impossible task to judge footballers from different eras, playing in different times, with different rules, but the PA news agency’s Carl Markham gives his assessment on those who purport to be ‘the greatest’.

Big-time hero, small-time villain (unless you were English in the 1980s), Diego Armando Maradona melded fantastical football and a larger-than-life lifestyle to brilliant effect. He was the stand-out player as Argentina won the 1986 World Cup – with a little help from the Hand of God – and his silky skills and driven determination saw him inspire Napoli to the first two Serie A titles in their history and a maiden UEFA Cup victory. Three days’ national mourning in his homeland and mass outpourings of grief and celebration on the streets of Naples highlight the esteem in which he was held.

🗣️ "If you take the qualities of Cristiano Ronaldo and Messi, put them together, then you’d have a player to compare to Pele!" 📊

Before Maradona, Pele was the undisputed greatest in most people’s eyes. A winner of three World Cups – the first in 1958 when he scored six goals in four games aged just 17 – his individual skill and eye for goal was unrivalled but he also benefited from playing in some of the best international sides in history. He won six league titles and two Copa Libertadores with Santos.

Maradona’s heir-apparent, Messi has yet to hit the levels of adulation in his homeland – due to the fact he has yet to significantly influence Argentina’s fortunes on the world stage and impose his will on the team the way his predecessor did. His Barcelona achievements (10 league and four Champions League titles) are a different story, where he has set new standards with a consistent level of genius previously not seen in European football.

Messi’s great contemporary rival, their comparison is probably the easiest as for nine seasons they played in the same league at comparable clubs. Ronaldo won four Champions League and two LaLiga titles with Real, having arrived with three Premier League winners’ medals, and now has two Serie A titles. He became a goalscoring phenomenon at the Bernabeu and is one of the world’s most recognisable sportsmen.

Five years ago, madridismo said goodbye to Alfredo Di Stéfano, the greatest footballer of all time and the man who changed #RealMadrid history forever.
👉 https://t.co/6Qj2NKU7hN pic.twitter.com/Ku3s9FNJ63

Probably the first football superstar, the Argentina-born forward was skilful, hugely prolific, creative and tactically versatile. After 12 years playing in his homeland and Colombia, his move to Real transformed them into a European super power. He scored in each of their five successive European Cup victories and single-handedly drove them to their first league triumph in 20 years in his first season at the club, one of eight he would win at the Bernabeu in addition to his two Ballons d’Or.

Not the architect but the orchestrator of Total Football, developed at Ajax and transferred to the national team. Supremely effective and hugely prolific at Ajax, where he won three European Cups, eight league titles and, individually, three Ballons d’Or. He won a league title with Barcelona, where his lasting legacy was to come in the brand of football they played with him going on to manage the club and become one of the most influential people in football.

The other Brazilian to make it to the top of the all-time greats list, Ronaldo at his peak was a goalscoring machine but with the talented touch of a boy who had grown up playing on the streets of Rio de Janeiro. He featured for some of Europe’s top clubs, winning trophies with all of them, won two World Cups and by the age of 23 had scored more than 200 goals for club and country, although serious knee injuries blighted his later career.