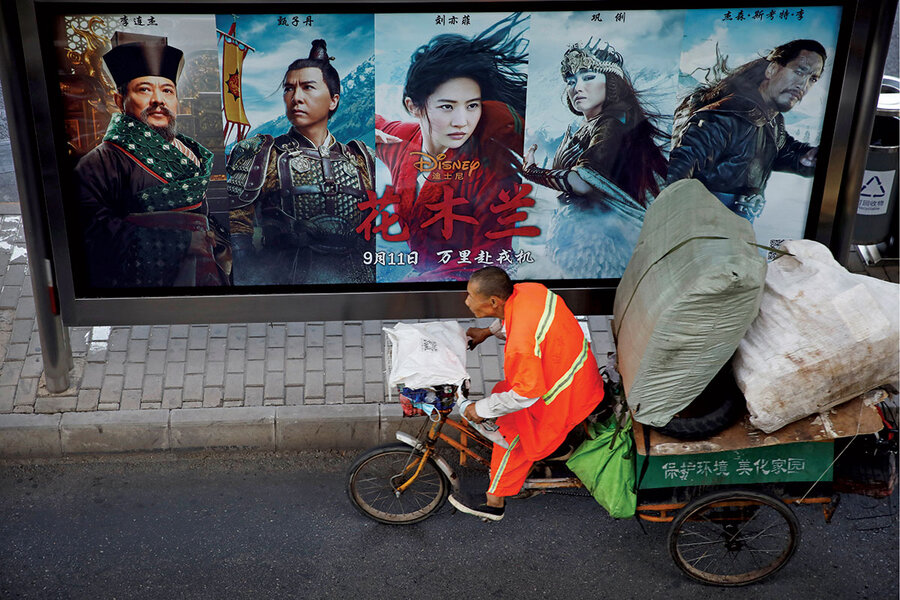 “[Consumers] probably can’t stop a company from doing what it does,” but at least they can avoid participating, says Chris MacDonald, an expert on business ethics and director of the Ted Rogers Leadership Centre at Ryerson University in Toronto. “Even if the boycott has no impact today, it may send a signal that affects the company’s behavior, or the behavior of other companies, in the future.”

Observers say there’s a simple reason why the Hollywood community hasn’t spoken up in defense of the Uyghurs or in support of protesters in Hong Kong. China is on the verge of becoming Hollywood’s biggest market. But in order for studios to access millions of Chinese viewers, it has to appease the government gatekeepers. There’s another element to that quid pro quo: heeding Chinese censorship guidelines. Consultants now vet movies at the start of a project to preempt content that Beijing may deem problematic. That includes portrayals of LGBTQ characters.

“What we need right now is unified action from Hollywood as an industry because if they do not draw the line around certain free expression principles now, that line will simply just be drawn and redrawn for them,” says Mr. Tager, deputy director of free expression research and policy at the nonprofit PEN America.

Sometimes filmmakers’ hidden concessions to the Chinese Communist Party do make the news. Marvel’s “Doctor Strange” changed the nationality of a key character from Tibetan to Celtic because China contests Tibet’s sovereignty. And the upcoming sequel to “Top Gun” obscured the Japanese and Taiwanese flags sewn on to Tom Cruise’s iconic motorcycle jacket. (China is engaged in long-running territorial rivalry with Japan and disputes Taiwan’s de facto independence from the Chinese mainland.) Those alterations were made even though a pro-U.S. military film such as “Top Gun” is unlikely to be released in China. It’s widely believed that the Chinese Communist Party has a blacklist. No one wants to be added to it.

“People who have spoken out are the people whose work has very little chance of ever appearing in China,” says Aynne Kokas, author of “Hollywood Made in China.” “For example, Judd Apatow, whose screwball sex comedies will never enter the Chinese market, spoke out.”

One cohort that has been outspoken is U.S. politicians. Republican Sen. Josh Hawley accused Disney’s CEO of “whitewashing” the genocide of Uyghurs. Five Republican senators also sent a letter of complaint to Netflix about its coming sci-fi series, “The Three-Body Problem,” because the Chinese author of the novels on which the series is based has defended his nation’s treatment of the Uyghurs. (Beijing has denied that the Uyghurs are abused and says that the camps are a response to violent attacks by Uyghur separatists.) Netflix responded, “We do not agree with his comments, which are entirely unrelated to his book or this Netflix show.”

But if studios and celebrities are too afraid to speak out, where does that leave concerned consumers of pop culture?

For Joshua Wong, one of Hong Kong’s most prominent pro-democracy protesters, the answer was to type “#BoycottMulan” in large letters on a computer screen. Then he tweeted a picture of himself holding up the monitor like a digital protest sign. His more than 720,000 followers took note.

“I was disappointed in Disney for giving special thanks to the Xinjiang government in the ‘Mulan’ movie,” says Mr. Wong, author of “Unfree Speech: The Threat to Global Democracy and Why We Must Act, Now.” “It’s time for the Hollywood industry to realize it should not kowtow to China.”

The Uyghur Human Rights Project, a Washington-based nonprofit, has also expressed dismay over “Mulan.” Many activists say that large Western corporations such as Disney should pull out of China. But disinvestment is a complex issue.

There are other things at stake if Disney were to decide not to do business with China, says Nicole Hassoun, an ethics scholar and a professor of philosophy at Binghamton University in New York. “I don’t know what that means for Disney’s bottom line, for the number of jobs that are going to be lost for people inside China, people outside of China. But at the same time, I don’t think the mere fact that this will harm your bottom line … gets you off the hook.”

Disney hasn’t released the number of viewers who paid a premium to watch “Mulan” on its initial release in September. But there’s scant evidence that Mr. Wong’s call for a boycott has been widely adopted by ordinary viewers. It has, however, generated media stories.

Victor Claar, who has taught economics at a Chinese university each summer, says it’s difficult to rally U.S. consumers for issues happening on the other side of the globe. But, he says, there are ways for consumers to make their voices heard, such as targeted donations to nongovernmental organizations. “You might be much more effective by giving, rather than trying to use your buying [power] to get bad actors in places like China to change their ways,” says Dr. Claar, the BB&T Distinguished Professor of Free Enterprise and associate professor of economics at Florida Gulf Coast University in Fort Myers. “We need to do our best to do the right thing.”