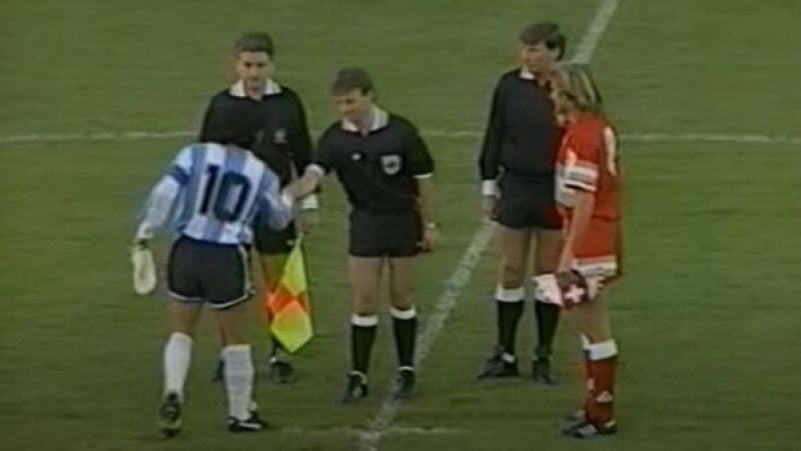 As the world mourns the loss of one of its greatest soccer players, an Irish referee has recalled the day he was responsible for keeping Diego Maradona in line.

The Irish Examiner spoke with Cork man Pat Kelly, who was an international referee at the time, about his role as the head official for a friendly between Switzerland and Argentina on May 8th, 1990.

Maradona, often noted as being a wildcard both on and off the pitch, was playing that day.

“It was the last friendly match prior to the World Cup and Diego Maradona played that day,” Mr Kelly told the paper.

Luckily enough I didn’t understand him. He was speaking in Spanish

Mr Kelly remembered the player fondly, saying he had little trouble with the Argentine captain.

“He was grand — he was smaller than me anyway,” he said, referring to his own stature.

“There were no issues with him. There was very little in the match to complain about. He threw the odd rant alright, like all players. But luckily enough I didn’t understand him. He was speaking in Spanish. He did make a few gestures and that but that’s it really,” Mr Kelly said.

He described Maradona, known for his amazing technique, as “something else”.

“I’ve seen them all — Ronaldo, Messi, Roy Keane, the lot. But Maradona has to be the best. Very skilful,” Mr Kelly said.

Though he admits to being a fan, the former referee said he remained professional throughout.

“I never asked anyone for an autograph. No matter how famous they were. I got the match ball after that match and got someone else to go and get the signature off him. I would never go and get it myself,” Mr Kelly said.

Argentina is honouring Maradona with three days of mourning after he passed away on Wednesday from a heart attack.