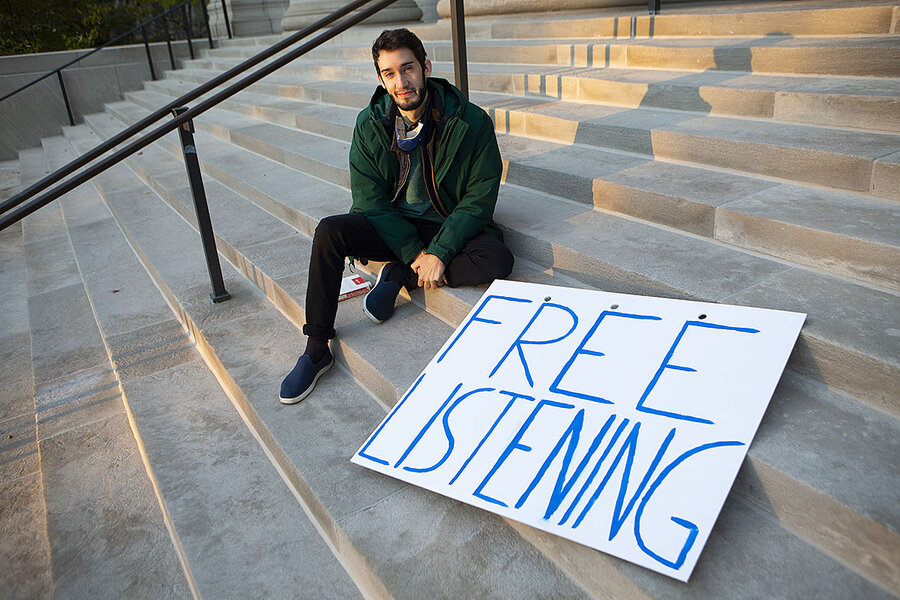 Heads down, earphones in, and buttoned up against the wind that comes flying off the nearby Charles River, pedestrians on busy Massachusetts Avenue tend to hurry by the imposing neoclassical pillars of MIT’s Building 7. The pale stone steps offer little of interest most days – except when a young man, who might otherwise blend in with the crowd of students and professionals below, perches there and holds up a large handmade poster offering “FREE LISTENING.”

“I would always notice that he was there,” says Shraddha Rana, a graduate student at Massachusetts Institute of Technology who often passed by Building 7. But she didn’t stop to investigate – at least, until a friend told her that she had taken the man up on his offer, and enjoyed the experience. Intrigued by the positive review, Ms. Rana decided to give it a shot.

“It was just very good to talk to him,” she says. “It was so easy to have a conversation, and we talked about a lot of things – for more than half an hour. And that made me want to stop by even more.”

Now she counts the listener – Kip Clark, a digital research analyst and podcast producer – as a friend.

Mr. Clark settled on the MIT steps with his sign about a year and a half ago. (He’s quick to clarify that he’s unaffiliated with the school.) He speaks clearly and deliberately, adjusting his manner as needed – first energetic and expressive for a student who stops to talk, then calm and reflective for this interview. Over his mask, his gaze drifts to the middle distance, but then regularly returns to his conversational partner – the anchor of his attention. He explains that he’s been offering “free listening” to the general public in various forms since 2018.

“I believe that listening is at the root of anything good that exists between people,” he says. “It can have a powerful impact when done with sincerity and presence, and also with the time that some people might need.”

To that end, he devotes a fair amount of his time to sitting at MIT – usually several days a week, and two or three hours per session, as long as the weather is good. Mr. Clark credits the idea for the sign to friends and event organizers who work to foster conversations between strangers through local meet-and-greet events in Boston, such as “Skip the Small Talk.” But he put his own spin on things by choosing a fixed public spot at which to repeatedly invite interaction.

“I think people are often subject to a lot of stressors and a lot of human disconnection as a result of the era we live in,” he says. “To me, listening is resonant because I don’t know that everyone feels they have that.”

His own life is evidence of that. “I was inspired by people in my own life that I love and trust and have always listened to me,” he says. “[But] in childhood, I didn’t always feel like I was surrounded by great listeners. So both negatively and positively, I’ve been shown the value of it.”

Anything from quiche to emotions

For Mr. Clark, listening can mean many different things. When someone takes him up on his offer, he tries to let them set the bounds of the conversation. “Someone [could say], ‘Hey, I just wanted to chat – I made a really nice quiche last night,’” he explains. “And I’d say, ‘Oh, that’s awesome. I’m glad to hear that. I think cooking’s great.’ We could have a chat that’s maybe not profound, but is an option for them to talk to a stranger and then walk away having had a positive interaction and a chance to express themselves.”

“And then the other part of listening – that I think a lot of people associate with my sign – is that someone might be in a state of emotional distress or confusion and want [another person] to bounce ideas off of,” he adds. He prefers to keep the details of more serious conversations private.

“Any effort that people give to centering listening is to be applauded and reinforced,” Andrew Wolvin, a professor of communication at the University of Maryland, says when told of Mr. Clark’s sign. “Some people don’t really have a listener. And if they did, [their lives] probably would be enriched, and perhaps be helped [with] some of the issues that they’re dealing with.”

There seems to be a quiet trend of recognition of what an open, nonjudgmental ear can do for the world. StoryCorps, the nonprofit oral history organization, launched an unofficial National Day of Listening in 2008; it happens annually the day after Thanksgiving. The International Listening Association also hosts a day devoted to listening; this year the theme was empathy. And in Los Angeles, Urban Confessional – a community of actors – began standing on street corners with signs offering free listening in 2012 to, as their website explains, open “their hearts to anyone who needed to laugh, cry, scream, or chat.”

Though Mr. Clark – who operates independently from any of those groups – wryly notes that the sign can inspire confusion and even derision from passersby, he usually pulls a steady stream of serious takers. Anywhere from one to half a dozen people will stop to talk during a given day, he reports. During the pandemic, that number has increased steadily since lockdowns began.

“I think a lot of us are feeling really socially exhausted and disconnected. The pandemic, I think, has had a toll on many,” he says. “I’ve enjoyed, during COVID, that [wearing] a mask does further anonymize me. … I really think great listening is less about who I am and more about who the [other] person is.”

Sitting out with the sign and inviting conversation “is something that’s so obvious to do – and yet so few of us have the confidence, or maybe just the level of interest, to actually do it,” says Matthias Webster, a former emergency dispatcher who regularly visited Mr. Clark before he moved across the country. “He just attracted a lot of interesting people. It’s amazing how quickly [they] tended to open up.”

“I guess I was curious what that angle was, so to speak,” he adds. “And I think the most interesting thing about him, to my mind, was that he didn’t really have one. … I always found him to be a pretty neutral, altruistic actor.”

But listening goes beyond social interaction. According to Dr. Wolvin, many political and cultural crises can be attributed to a fundamental lack of listening in modern culture.

“We all need to come together and listen to each other in seeking a more strategic effort toward a pathway toward peace in the world,” he says. “Listening should be central to the communication process. It’s one of the most complex of all human behaviors.”

For example, he says, many people don’t realize that visual and nonverbal cues from listeners can make or break a conversation. And empathetic listening, in which the speaker is allowed to talk all the way through a problem, can lead to self-reflection, healing, and problem-solving – and not just for the person being heard.

Mr. Clark, who listens to so many, is still excited to hear more: “As a straight white guy … mine is a demographic that is so over-discussed. I think anyone who really wanted to learn would be intellectually dishonest if they didn’t admit that you have to listen in order to learn what exists beyond yourself – with the reminder that you may not ever fully understand.”

That’s why he’s gratified by the wide range of ethnicities, ages, and national origins represented by those who have stopped to talk.

“To me, it does seem to indicate that … people in all different kinds of groups, cultures, and backgrounds could benefit from a listener,” he says. “And it doesn’t have to be me. But I enjoy talking to them because it’s human interaction. And I hope that continues for as long as I sit there.”