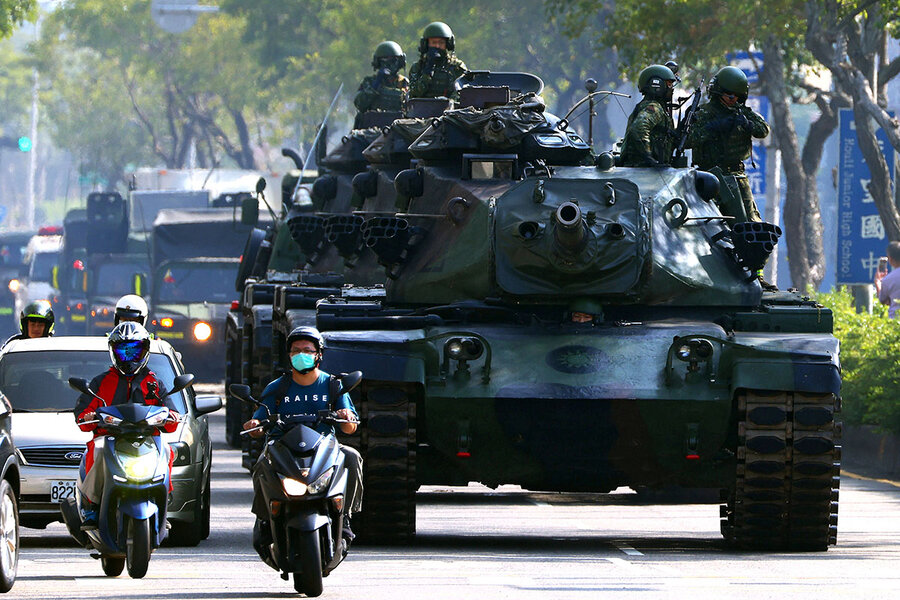 Yet the decidedly tense status quo is growing more so. PLA pilots now cross the median line “with impunity, so that sets up a much more dangerous arrangement where the Taiwanese jets always have to intercept,” says Kharis Templeman, a visiting fellow at the Hoover Institution and a lecturer in East Asian studies at Stanford University. “The Taiwanese are pretty well trained, but … you can imagine them crashing into one another, and the two sides do not have good communications to de-escalate,” he says. For its part, Beijing’s Foreign Ministry spokesman stated in September that the median line is “nonexistent.”

Chinese military analysts agree the risk is high, if for different reasons. “In my opinion, most of the military tensions today are the result of enhanced relations between Taiwan and the United States,” says Lyu Jinghua, a retired PLA colonel and a visiting scholar at the Carnegie Endowment for International Peace. The Taiwan Strait is currently “very dangerous,” Colonel Lyu says, because “the Chinese government has no room to maneuver if the Taiwan crisis escalates. … [It] will have to fight to defend the territory and sovereignty of China.”

China’s military capabilities have grown dramatically over the past 20 years. With “staggering amounts of new military hardware” and improvements in joint operations and combat readiness, Beijing is on track to meet its goals of modernizing the PLA by 2035 and building a “world class” military by 2049, according to the Pentagon’s 2020 China military power report released in September.

Yet China still lacks the ability to wage its ideal military campaign on Taiwan: a swift, overwhelming attack and successful amphibious landing invasion that would present the world with a fait accompli. “Even though it’s a short distance from mainland China to Taiwan, [the PLA] would still have to deal with Taiwan’s defensive capabilities,” such as sea mines, anti-ship cruise missiles, and booby traps, as well as weather and geography that limit China’s options, says Derek Grossman, a senior defense analyst at Rand Corp. who focuses on Indo-Pacific security issues.

“If they failed, it could be the end of Chinese Communist Party rule. It would be seen as so incompetent and embarrassing,” he says.

Another important deterrent is Taiwan’s embrace of a new, asymmetric defense strategy. Faced with the reality of China’s massive military spending – an estimated $250 billion last year compared with Taiwan’s $11 billion – and a stark force imbalance that will only grow, Taiwan is adopting a more nimble, David vs. Goliath approach.

The goal of the new strategy is to take advantage of Taiwan’s geography to fortify the island. “‘Fortress Taiwan’ is really the mantra now at the Pentagon – trying to make Taiwan an impenetrable fortress to Chinese attack is now the key objective,” says Mr. Grossman.

Known as the “Overall Defense Concept,” the strategy “redefines winning the war as foiling the PLA’s mission of successfully invading and exerting political control over Taiwan,” retired Adm. Lee Hsi-min, who developed the concept as chief of staff of Taiwan’s armed forces from 2017 to 2019, explained last week in The Diplomat.

No longer planning for a war of attrition with high-profile, expensive conventional weapons platforms such as fighter jets, tanks, and submarines, the strategy instead relies upon low-cost weapons systems meant to stymie a Chinese invasion, such as minelaying ships and stealthy fast-attack crafts dispersed among fishing boats in the island’s 200 ports, Admiral Lee wrote. It uses camouflage and deception to preserve Taiwan’s forces, combined with large numbers of small, mobile, lethal, and hard-to-target weapons designed for guerrilla warfare, such as precision-guided munitions and cruise missiles, man-portable air-defense systems, and anti-armor weapons.

The U.S. is backing the strategy with advanced sales of asymmetric weaponry such as armed drones, and shore-based cruise missiles that can target ships on the fringes of China’s littoral. “That is where China is the weakest,” says Mr. Thompson, who is now visiting senior research fellow at the Lee Kuan Yew School of Public Policy at the National University of Singapore.

“Taiwan has tremendous advantages and is figuring out now how to maximize them,” says Mr. Thompson. “If you are China and looking at what Taiwan has done in the last decade, there is a reason China is deterred,” he says. “The PLA knows it will not be a cake walk, so they are taking a tremendous risk in initiating an invasion.”

China, for its part, has focused much of its effort on trying to counter the anticipated U.S. military intervention in a Taiwan contingency, using area denial weapons such as bombers and a new ship-to-ship, supersonic missile. “The PLA has spent the last 25 years trying to make it as difficult as possible for the U.S. military to move into that air space and sea space without suffering a lot of casualties up front,” says Mr. Templeman. The new ship-to-ship missile expands China’s anti-access area, raising concerns at the Pentagon, he says.

“This is a rare weapon that has a longer range and is more effective than what we have in our own stocks, so it has gotten a lot of attention from our military,” he says. “They don’t like to be outgunned on anything.”

But experts on both sides of the strait point to encouraging signs that all parties can avoid confrontation in the first place – such as the existence of functioning military communications mechanisms at multiple levels between Washington and Beijing.

Despite increasing tensions, “the two militaries are very conscious of their communications and so they are still holding consultations” as planned, says Colonel Lyu. “The number of dangerous incidents between the planes and ships are actually decreasing” since 2014, when the PLA and Pentagon signed agreements to create confidence-building measures, she says. Those memorandums “are playing a very positive role in preventing a crisis.”