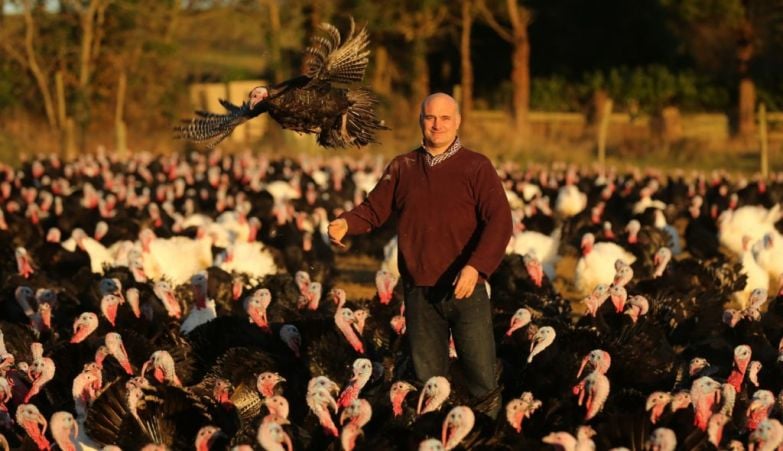 David McEvoy with his free range turkeys at McEvoy’s farm in Louth, Ireland, ahead of the festive season, © PA Archive/PA Images

A turkey farmer has said his customers are not getting in a flap when it comes to ordering their Christmas dinner.

Despite the coronavirus pandemic potentially limiting Christmas gatherings, David McEvoy said his orders have increased by 50 per cent.

Mr McEvoy, of Termonfeckin Delicious Turkeys in Co Louth, said people are more keen to order his stock than ever before.

He said: “This year is going super for turkey orders. We’re up about 50 per cent last year on the same date.

“The turkey’s were hatched in June and are outside since August. As you can see, they’re looking fantastic.

“I think this year people are going out of their way to get a special turkey for Christmas, seeing as it is an extra important occasion this year, considering the long, difficult year everybody’s had.

“I’m very optimistic about the market and hopefully we’ll be sold out somewhere around December 5th, which is pretty early, this year.”

While the uncertainty of the pandemic has not hit sales, with limits to be imposed on Christmas dinner gatherings, people are winging it with their orders.

Mr McEvoy said: “Some people have ordered a turkey but actually haven’t specified the size.

“They’re just not quite sure as to how many people will be coming for dinner. There’s not a lot of that, but there’s a few. I have noticed that in the ordering.”

At the moment I do see smaller turkeys, particularly in the orders we received

He said he had noticed that many people are ordering smaller turkeys this year, possibly owing to smaller numbers expected at Christmas dinner.

The farmer said: “At the moment I do see smaller turkeys, particularly in the orders we received so far.

“Ultimately our turkeys start at around four-and-a-half kilos, so that is the smallest size. But you get a much plumper turkey with our type of turkey.

“We mightn’t sell the very biggest turkeys, but in general people seem to be ordering what they’ve always ordered.”