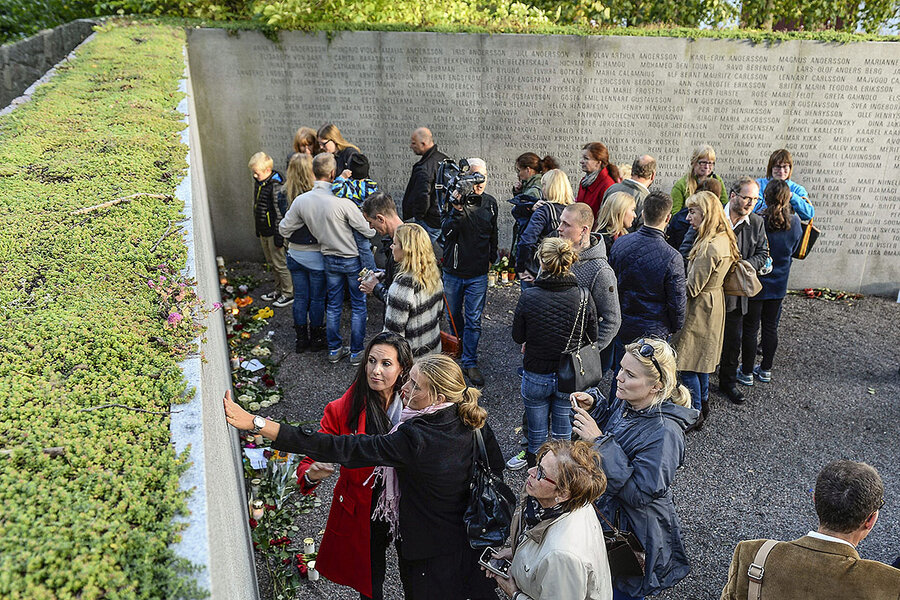 Mart Luik was in Paris when he found out that the MS Estonia ferry had sunk, killing more than 850 people, a quarter century ago.

“I … rushed to call to see if any of my family were aboard and to see what happened,” Mr. Luik, now an adviser in the Estonian foreign minister’s office, says. “I think all Estonians of a certain age remember where they were when they heard about the Estonia.”

The sinking of the passenger ferry in the early hours of Sept. 28, 1994, under mysterious circumstances in the Baltic Sea is the worst peacetime maritime disaster in European waters. All told, 852 of the 980 passengers and crew aboard the massive vessel died in the tragedy.

Citizens of seventeen nations died when the MS Estonia capsized. It was especially devastating to the two countries with the most people on board: Estonia and Sweden, who lost 285 and 501 citizens respectively. The scale of the tragedy, and the small size of the nations involved, meant that it struck across their entire populaces. “Sweden is so small that basically everyone knew someone who drowned,” says Rolf Sorman, a Swedish survivor.

For years, the official cause of the sinking has been written off as a mechanical failure – a finding that has not sat well with survivors who were on the MS Estonia at the time. But now, after Swedish journalist Henrik Evertsson incorporated new footage of the ferry wreckage into a new documentary, the question of what sank the ferry has been reopened. And the revelations he has brought to light are stirring the two countries to rethink one of the greatest tragedies in their modern history.

A sudden bang, a ship sinking

The MS Estonia was the pride of its newly independent namesake republic. The 15,000-ton steel vessel, 510 feet long and nine decks high, featured a swimming pool, a sauna, a casino, and a cinema, along with labyrinths of cabins with accommodations for up to 2,000 people for the overnight trip between Sweden and Estonia. It also had a car deck that stretched from bow to stern through the hull’s insides. In port, the car deck was accessed through a special bow that could be raised to allow vehicles to roll on and roll off.

Around 1 a.m. on Sept. 28, 1994, the MS Estonia, then en route from Tallinn, Estonia, to Stockholm, foundered in a severe Baltic storm off the southwest Finnish coast. As numerous survivors have attested, a sudden clanging sound reverberated through the ship.

“I was sitting in the ship’s bar, quite sober, when a sudden ‘bang’ took place,” says Swedish Special Envoy to the Korean Peninsula Kent Härstedt, then a young foreign ministry official. “Suddenly the ferry was immediately thrown to the side.”

“I immediately thought that the ship had hit something, perhaps a container, and changed course,” said Mr. Sorman, who also happened to be up at that hour.

“Actually, the blow was so strong I was too stunned to think anything,” says Mr. Härstedt. “Then everyone was falling.”

As Mr. Sorman, Mr. Härstedt, and others fought their way to the passenger deck, the car deck became flooded, causing the ferry to capsize and sink in less than 50 minutes. At the same time the door, and putative cause of the disaster, came off entirely.

In 1997, the Joint Accident Investigation Committee (JAIC), the body appointed by the Estonian, Swedish, and Finnish governments, issued its report on the sinking. It indicated that the locks on the bow door had failed from the strain of the immense waves hitting the MS Estonia, causing the door to be separated from the rest of the vessel, pulling the ramp behind it ajar, leading to the lightning-fast flooding. Although the investigators found other contributing or aggravating factors, including the ship’s high speed and the MS Estonian crew’s passivity and lack of safety training, that was deemed the principal cause of the disaster. The JAIC’s report indicated no external damage to the hull.

“It’s engraved in my memory forever”

However that was not the end of the story for the families of the deceased, nor the survivors, like Mr. Sorman and Mr. Härstedt, who were frustrated by the investigators’ refusal to interview the survivors. Mr. Sorman ended up being one of three survivors in his traveling group of twelve, while Mr. Härstedt was one of only two in his group of two dozen.

“We were never given the opportunity to share our information,” says Mr. Härstedt. “It was very upsetting. … It still is.”

And the sinking traumatized Estonia and Sweden. This correspondent reported on the tragedy for The New York Times in Helsinki, and later in Turku, the Finnish city nearest the sinking, where the haggard, too few survivors from the MS Estonia were helicoptered in, along with Stephen Kinzer, the Times’ Berlin bureau chief who anchored the paper’s coverage.

Mr. Kinzer still recalls the crater-like impact the disaster had on the two societies. “Death on this scale was a cataclysm that deeply shook people in both countries. It seemed to strike every family. People were stunned. The emotions went as deep as any I’ve ever seen or felt. And with that level of shock and grief surrounding you, even reporters can’t help being affected by it.

“To this day I remember looking at people’s blank faces in Turku and [Estonia’s capital,] Tallinn,” says Mr. Kinzer, who now teaches at Brown University. “Even for those of us not directly affected, it was a traumatic episode to live through. It’s engraved in my memory forever.”

The catastrophe also made a lasting impression on Mr. Evertsson, who was only 7 when he first heard about it on the radio. Investigating the sinking has been a priority for him ever since he became a journalist.

It took some years for Mr. Evertsson, who directed the documentary along with his co-producers Bendik Mondal and Frithjof Jacobsen, to acquire the financing from Discovery Networks Norway for the expensive – and potentially illegal – expedition they envisioned. An international treaty deeming the MS Estonia a sacred site forbids approaching it or diving near it.

Nevertheless, Mr. Evertsson’s team, including a Norwegian diving company, traveled to the site on a ship registered in Germany – the only nation on the Baltic Sea that did not sign the aforementioned treaty. And they went ahead and filmed the length and breadth of the sunken ship.

In the process, they discovered a 14-foot-long hole in the ship’s hull, contradicting the JAIC report’s finding about the lack of external damage and suggesting that a collision may have caused the catastrophe.

On Sept. 28, the 26th anniversary of the disaster, their five-part documentary, “Estonia: The Find That Changes Everything,” was broadcast throughout the Baltic region. The effect of the film, as well as the furor it caused, was immediate.

Among those watching were survivors Mr. Sorman and Mr. Härstedt.

“My reaction was that the film confirmed the Archimedean principle also applied to [the MS] Estonia,” says Mr. Sorman, now a school headmaster in Nacka, Sweden. “For a ship to sink there must be a hole beneath the waterline. I thought the film was very well done.”

“I thought the documentary was credible and trustworthy,” Mr. Harstedt agrees. “I also am upset that it took a private filmmaker and journalist to do a job that three democratic states should have properly done in the first place.”

The reaction of the Estonian, Swedish, and Finnish governments was more complicated. For its part, the Estonian government took it seriously enough to dispatch its prime minister and foreign minister to Stockholm and Helsinki to discuss the film and its findings with their counterparts.

At the same time, all three governments have reserved judgment about the film’s reliability. As Mr. Luik, who is assisting with the new investigation, put it, “We have no reliable information which would disprove the main conclusion of the JAIC’s report” – that the failure of the bow door caused the MS Estonia to sink.

That said, Mr. Luik continues, “it is obvious that we need to conduct a new technical investigation which is exhaustive, technically sophisticated, transparent, and independent.” Currently the three governments “are discussing the proper criteria for the new investigation.”

“I simply do not trust the original investigative entities to investigate themselves,” says Mr. Sorman. “For me this is all about trust, as well as about maritime safety.”

“To conduct a new trustworthy investigation is of the utmost importance out of respect for those who died, as well as their relatives, and everyone else who was impacted by the disaster,” says Mr. Härstedt.

Mr. Evertsson says that his purpose in making the film was not necessarily to disprove the JAIC report, but to posit another theory for why MS Estonia sunk so quickly that might account for the new hole he discovered.

“I want to be clear that we didn’t and don’t make any conclusions,” he says. “It’s up to the experts to investigate further.”

In the meantime, the Swedish government indicted Mr. Evertsson for trespassing on the MS Estonia site, for which he faces up to two years in prison. The case goes to court in January.

“To perform the critical journalism that was necessary in the case of the Estonia was more important than the charges,” he says. “I welcome the opportunity to discuss the film in a court of law.”

“People are calling me and crying and thanking me because now maybe the truth can be revealed,” he says. “For me that is sufficient.”

On Thursday, Mr. Evertsson received validation of another kind when he was awarded the Swedish Grand Prize for Journalism, the Swedish equivalent of the Pulitzer Prize, for Best Scoop of the Year.

Editor’s note: This story has been updated to correct Mr. Luik’s employment in the Estonian government.