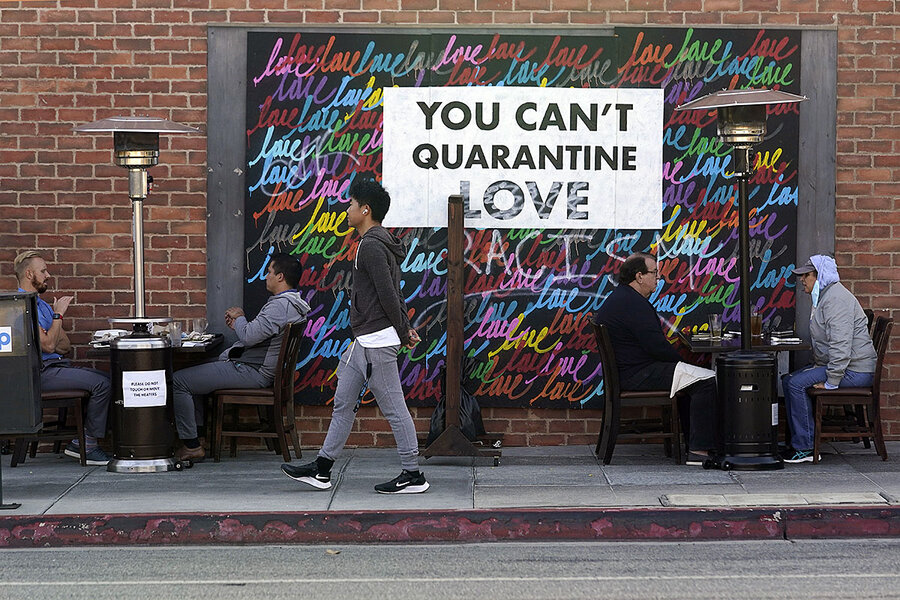 As the pandemic surges nationwide in the United States, rules meant to curb the virus are testing not only the patience of many Americans, but also their reasoning.

What is the logic, for instance, behind closing the National Zoo in Washington, D.C., when scientists say it is safer to be outdoors than indoors? Why do the West Coast states – all run by Democrats and consulting each other on pandemic strategy – have three different standards for indoor worship, from 25% of occupancy (Washington), to 25 people (Oregon), to no indoor worship (most of California)? And a biggie – why are many schools closed (from New York to California), while bars are not?

“There have been reasons to question why close this and not close that,” says Jeanne Ringel, senior economist at the Rand Corp. who specializes in public health research. For example, “it doesn’t seem that schools are a big spreader, but research does suggest that restaurants, bars, and gyms are, and they remain open.”

The questioning goes beyond impatience with restrictions – “COVID fatigue” – to mistrust of rules, says Dr. Ringel. In turn, that can lead to noncompliance, just when America is entering the holiday season, which is traditionally a peak gathering time for friends and family and a make-or-break time for many businesses. The U.S. has surpassed 12.5 million cases, and the Centers for Disease Control and Prevention has asked people not to travel to see loved ones. Inconsistent messaging – from the federal government to the states, and between states and within them – contributes to the head-scratching, as people compare what’s happening in the next county or next state.

“So much of compliance depends on voluntary cooperation,” says John Pitney, a professor of political science at Claremont McKenna College in Claremont, California. “People will go along if they see a consistent set of rules that seem to make sense.”

“It’s about a lack of consistency”

That looks to be coming to a head in California, where the director of public health for Los Angeles County, Dr. Barbara Ferrer, is butting heads with the chair of the county’s board of supervisors, Kathryn Barger, over a new health directive to close outdoor dining at at bars and restaurants for three weeks, starting Nov. 25. Take-out and delivery are allowed. Owners are complaining loudly after having invested in tent canopies and heat lamps.

“It’s about a lack of consistency,” Supervisor Barger said on KPCC radio Nov. 23. “Our own public health director has said that more than 50% of the positives being reported are the result of private social gatherings with someone who tested positive.”

In press conferences, Dr. Ferrer has pointed to many sources for a recent surge of cases in the nation’s most populous county – the largest surge since the pandemic began. She cites private gatherings and parties, celebrations related to two team championships (the Lakers and the Dodgers), and noncompliance at workplaces. But it’s nearly “impossible” to pinpoint where and when people are becoming infected, she said Monday.

The county has interviewed more than 280,000 people who have tested positive, and most have no idea where they got the virus, she explained. So when the county says that 10% to 15% of infections come from restaurants, it’s based on a smaller sample size of people who know where they were exposed, or it is based on an outbreak investigation. Meanwhile, she announced, the entire county is heading toward another stay-at-home order, though modified, because the five-day average of new cases has surpassed 4,500.

California’s Democratic Gov. Gavin Newsom has also come under criticism for flouting his own rules on social gatherings. Last week, he had to apologize after he was outed for attending a dinner birthday party for a friend at a swanky restaurant. His apology came on the same day he announced that 40 counties were moving backward into more restrictive tiers, affecting some 94% of the population. He’s been criticized, too, for sending his children to private school while millions of others have no choice but distance learning. The first family is now in quarantine because their children were exposed to a highway patrol officer who tested positive.

“It … doesn’t help when the governor and others are not following the rules,” says Dr. Ringel. She questions the effectiveness of a new curfew of 10 p.m. to 5 a.m. that applies to nonessential businesses and residents in the most restricted counties. It probably cuts down on transmission among people who might be at bars in the evening or other gathering spots, “but I don’t know that there’s any evidence, particularly research evidence, to support that,” she says. It is a way to balance economic and health needs, she says, though “I’m not sure it ends up doing either very well.”

The question of curfews

Governor Newsom is part of a trend of Democratic and Republican leaders across America – and other countries, too – who are turning to curfews.

In Ohio, Republican Gov. Mike DeWine recently announced a 10 p.m. to 5 a.m. curfew that includes numerous loopholes and exceptions. John Frank, who works at Brink Brewing Company in Cincinnati, finds the curfew too small in scale to make much of a change. In addition, he says, patrons who might complain about others not wearing masks can, and do, walk into the brewery and, once they’re seated, take their masks off and talk to each other in close quarters.

“It kind of seems like [they’re] just making it seem like something’s being done,” he said of regulations. “But I mean, I don’t think anybody in general really understands how to navigate this. … It’s a situation where nobody has the answer, but you have to give an answer.”

Mr. Frank had a second job at a steakhouse across the river in Covington, Kentucky – 9 miles away – until Friday, when the governor there banned indoor dining in the state. Outside of work, he tries his best to limit his social circle, and so reduce his odds of being a carrier.

Robert Wachter, chair of the department of medicine at the University of California, San Francisco, says he understands doubts about a curfew. It seems perfectly reasonable to ask why a virus wasn’t dangerous at 9:58 p.m., but it is at 10:02 p.m., he says.

“It can seem a little silly for an individual, but for a population, the country, or the city of San Francisco, it’s reasonable,” because it’s aimed at activity where people take off their masks, drink, and are closer than they should be.

He strongly defends the rules of San Francisco – which went into lockdown before last spring’s state order and was slower to open up. Its cautious approach made it the first urban center in California to reach the least restrictive tier. Last week, it imposed new restrictions as an increase in cases pushed it back into a more restrictive tier, but Dr. Wachter is not concerned, citing the expected “roller coaster” nature of a pandemic. He’s proud that the city, the densest in America after New York, has recorded only 158 deaths since the pandemic started.

Of all the rules, he points to mask wearing as the most important, and indeed, Republican governors who once shunned the idea are now embracing it as the pandemic stretches hospital capacity in their states. North Dakota needs to “avoid a post-Thanksgiving crunch,” said Gov. Doug Burgum after two weeks of surging hospitalizations forced him to impose a statewide mask mandate – something he once said was unnecessary and unworkable.

Much of the inconsistency with rules stems from a lack of strong federal guidance, says Emily Blodget, who teaches at the Keck School of Medicine at the University of Southern California in Los Angeles. “I think it’s difficult because we don’t have federal guidance, at least not now, so each state is determining their own rules,” says Dr. Blodget, who specializes in infectious diseases.

“The president of the United States has to be the leader on this. … It’s got to come from Washington,” says Zev Yaroslavsky, a former member of the Los Angeles County Board of Supervisors. He credits the Food and Drug Administration for recent approval of a drug to treat COVID-19 and the Centers for Disease Control and Prevention for its strong guidance against Thanksgiving travel, saying the federal agencies “seem to have snapped to attention.”

Not everyone believes the answer is top-down rule-making.

On the first night of the California curfew last Saturday, protesters gathered on the pier in Huntington Beach, a community that bristles at directives from the governor. Two state Republican lawmakers sued to prevent the governor from overstepping when it comes to the pandemic, and a state superior court recently barred him from taking executive action that changes existing law or creates new law. But a California appellate court temporarily blocked that injunction last week.

The governor is overreaching, says Laurie Davies, a Republican who is heading to the state assembly from another beach community, Laguna Niguel. “One size doesn’t fit all.”