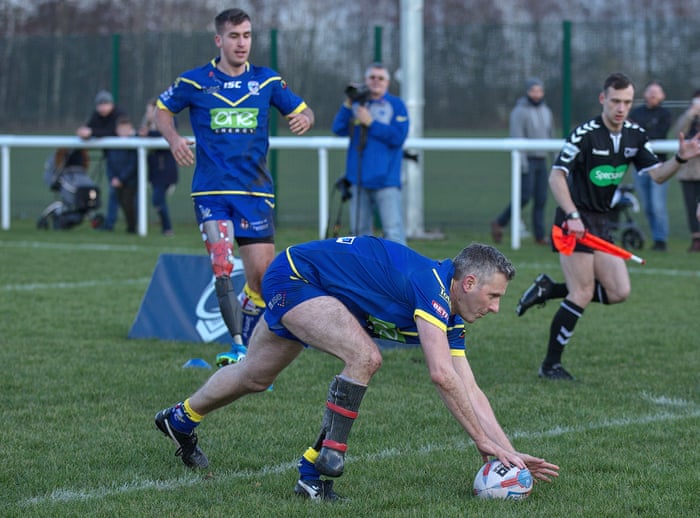 Adam Hills will not do stand-up gigs on a Tuesday night. Some time ago, he told his agent to stop booking them. Instead, every Tuesday afternoon he will leave his house in London, catch a train north to Warrington and spend a couple of hours getting smashed to bits. Then he goes home.

Over the last few years, it is a hobby that has cost him thousands in train fares, a broken ankle and on one occasion his consciousness, after he was laid out on the turf by a hit. But it has also given him hours of pleasure, a sense of purpose, a cause and a community. And it is why a 50-year-old comedian and television presenter now finds himself on the verge of fulfilling his lifelong dream of playing in a rugby league world cup.

An unlikely journey, especially for a man born without a right foot and basically resigned to the fact he would never play the sport he loved. Hills had no idea physical disability rugby league (PDRL) even existed until someone sent him a tweet about it a few years ago. Now, when he is not doing stand-up or filming The Last Leg on Channel 4, he and his prosthesis will turn out on the wing for Warrington Wolves, the current PDRL Grand Final champions.

They don’t go easy on him, either. Quite the opposite. “There’s only one thing that English people like hitting harder than an Australian, and it’s an Australian that’s on television,” he observes. “I’m pretty good defensively, not as quick as some of the other guys. But that’s what happens when you’ve got one leg.”

So, the rules of PDRL. There are nine players on a team. Two players – generally with brain or spinal injuries – are deemed non-contact, and can only be tag-tackled. Two are able-bodied players, who can’t score and can’t run more than 10 metres with the ball. The field is slightly narrower than regulation, and knock-ons count as tackles. Apart from that, it’s full rugby league. 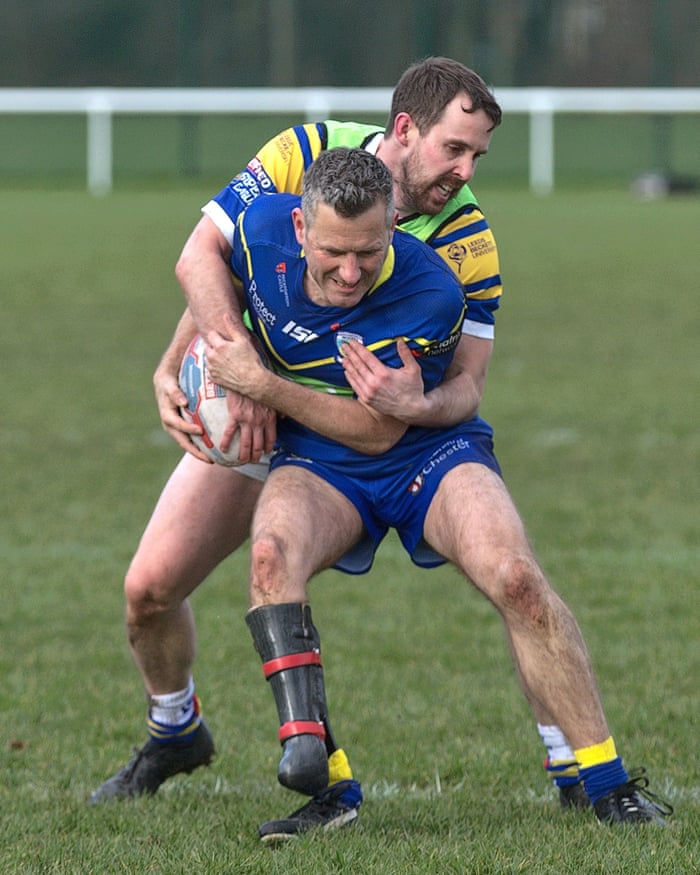 And this is ultimately the point: however modified, this is still unmistakably rugby, and therefore brutal in virtually every aspect. “We want to hit hard and we want to be hit hard,” says Hills. “We’ve had people go soft on us our whole lives. And that is lovely and understandable. But when we play against each other, we’re all disabled, which means none of us are.”

Nowhere is this plainer than in the tactics, which are more ruthless than you might expect. “If a guy’s coming at you and he doesn’t have an arm on his left-hand side, step on his left-hand side!” Hills says. “If anyone’s trying to tackle me, they’ll know which foot I’m going to step with, because I’ve only got one that works. We’ve all got a weakness, if you want to use that word. But if you don’t use it, then you’re patronising us.”

As for the players, it takes all kinds. One of Warrington’s able-bodied players is the former England full-back Shaun Briscoe. Some of his teammates will have never played rugby league before. Some played to a decent level, some rediscovered the game after years out. “One of the guys on our team lost his leg in a cycling accident,” says Hills. “He did himself so much damage in his first game back that he had to have his leg re-amputated. And his wife was so scared he was going to come back to training prematurely that she hid his leg.”

Hills has been there pretty much from the start. He’s even made a film about the sport for Channel 4, called Take His Legs. Now comes the next step: only a few years after it was first played in this country, PDRL has its own world cup, to be staged alongside the main competition in England next year. Five nations will take part at a purpose-built venue in Warrington’s Victoria Park, currently being constructed with a £600,000 grant from the Rugby Football League and Sport England.

It’s a measure of the wider legacy already being generated by next year’s tournament, one that largely echoes the creed of the sport itself: a game that looks after its own. “I’m hoping this will be like what the Paralympics did for disability sport in 2012,” says Hills. “Maybe some of the five-year-olds watching next year will be the captains of future.”

Before then, meanwhile, Hills has a big decision to make. “I’m Australian,” he says with just a hint of awkwardness. “And of course I want to play for my country. But most of the guys playing for England are my mates. So I don’t know what to do. I was talking to Shaun Briscoe about it. And he said: ‘Well, it’s a very simple choice. Would you rather represent your country or win the World Cup?’”