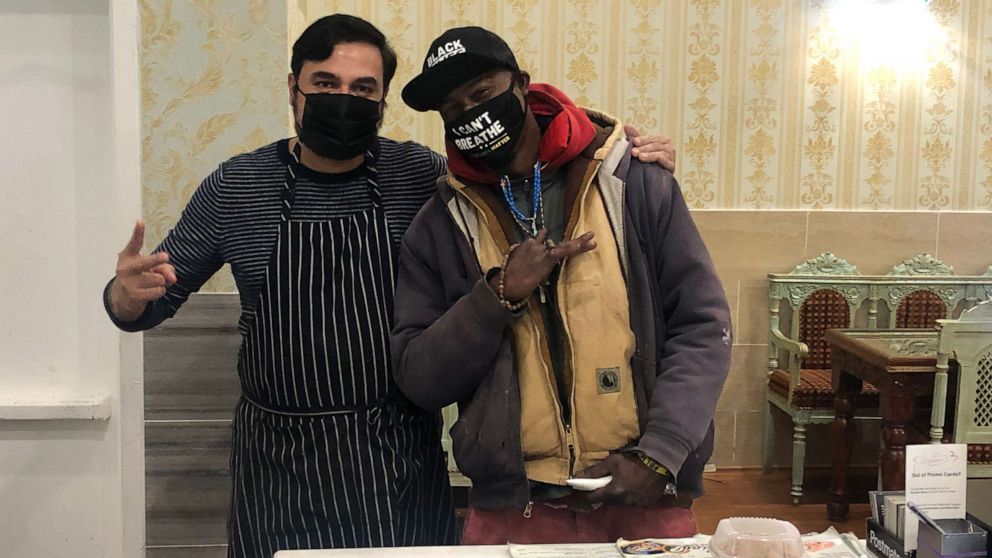 In the heart of Washington’s big-money lobbying and law firm district, restaurateur Kazi Mannan has been serving up kebabs and curries to the rich and the poor for nearly a decade.

“These are my mom’s recipes that we use because we named it after her and we want to honor her with her recipes, the way she used to cook,” said Mannan, a first-generation Pakistani immigrant who owns Sakina Halal Grill, just a few blocks from the White House.

Since he opened his restaurant in 2013, Mannan has been quietly seating and feeding thousands of homeless and hungry just like paying customers, inviting them in for a meal without fanfare or attention, no questions asked.

“Don’t worry about it. Just have a seat. Enjoy longer,” he said of his message. “The idea to feed from a restaurant doesn’t exist because people are scared. Letting poor people come in — (some say), ‘it will ruin your business.’ But it’s the opposite for me.”

In over seven years of serving the community, Mannan says he never had to call the police for help.

“Those people who always have trouble outside, but coming here … they see the love and kindness we share,” he said.

There’s a strict, no-judgement policy in force, he tells his staff.

When COVID-19 hit the restaurant industry hard this spring, the steep decline in business nearly made Kazi go hungry too. As profits evaporated, he laid off a dozen from his staff, cut the free meals and contemplated having to close for good.

Then, a global community rallied to the rescue, inspired by his story, which was first shared widely by ABC affiliate WJLA.

More than 6,500 donors — many not known personally to Mannan — have chipped in a quarter million dollars to a GoFundMe campaign he started this month to try to stay afloat. The unexpected outpouring has humbled and empowered him to give even more.

“This is a symbol of love and people didn’t want this symbol to go away in ashes because (if) the restaurant is gone, my story ends,” he said.

His story as a small business owner in America began with a simple lesson from his late mother, Sakina, the restaurant namesake, who modeled hospitality during his childhood in a rural Pakistani village.

Her outreach to complete strangers helped open his eyes to the homeless Americans he says many pass blindly on the streets of D.C. — more than 6,300 now homeless in the nation’s capitol this year, according to the Metropolitan Washington Council of Governments.

They are among the more than half a million now homeless nationwide, according to the National Alliance to End Homelessness, a number that has spiked during the pandemic and added to the ranks of the hungry.

“Some people have mental issues, health issues. We were patient with them and they were patient with us. So it was a relationship,” Mannan said. “As a child, you don’t understand giving. But (Sakina) knew that giving brings joy to her. And that’s what I feel every single day.”

As business starts to slowly bounce back, Mannan is celebrating the return of more customers, especially the ones who need help the most.

It’s a circle of generosity, propelled by faith in kindness, as Mannan hopes others this Thanksgiving season choose to show gratitude — by giving.