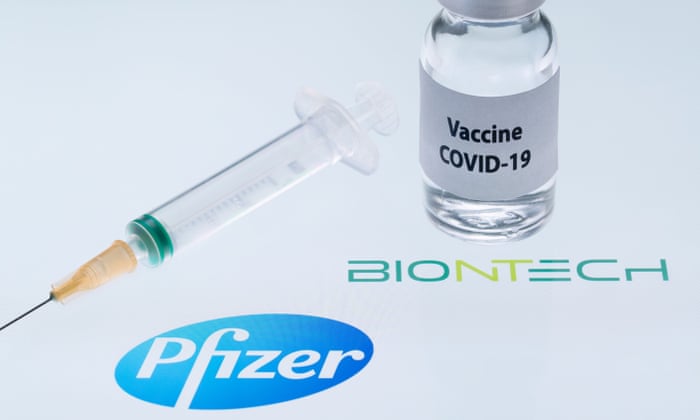 Hospitals have been told to prepare for the rollout of a coronavirus vaccine in as little as 10 days’ time, with NHS workers expected to be at the front of the queue, the Guardian has learned.

NHS bosses said hospitals in England could expect to receive their first deliveries of a vaccine produced by Pfizer/BioNTech as soon as Monday 7 December, with regulatory approval anticipated within days.

According to sources at several hospitals across the country, NHS England said they should expect to get stocks of vaccine on 7, 8 or 9 December.

Initially only NHS staff are set to be given the jab, with care home residents and the over-80s having to wait. This is despite those two groups being classed by the government as top priorities for Covid immunisation, as they have the greatest risk of death from the disease. Care sector chiefs reacted angrily, warning that the move would be seen as a “betrayal”.

Guidance issued in September by the Joint Committee on Vaccination and Immunisation (JCVI), the government advisers who decide which groups get priority, said older people in care homes and their staff should be top of the list. Anyone over 80 and all those working in health and social care were the second priority, it said. Public Health England reiterated the priority list in guidance for the NHS on Friday.

But the nature of the Pfizer vaccine appears to have forced a rethink of who gets it first. Its composition means it should be moved only a limited number of times, experts believe, and as such it cannot easily be transported by healthcare staff such as GPs to care homes and older people’s private residences.

NHS officials believe that if it is moved more than four times it risks becoming unstable and ineffective. By the time it reaches UK hospitals, it will have been moved twice, from the Pfizer production plant in Belgium to storage hubs in Britain, and from those hubs to hospitals where it can be administered.

One senior hospital executive told the Guardian: “We’ve been told to expect the vaccine on 7 December and plan to start vaccinating our staff all that week. However, it’s the Pfizer vaccine we’re getting, so it can’t be moved again once it gets to us and we then have to use it within five days, as that’s its shelf life.

“The original plan was to do care homes first. But once the vaccine gets to us it can’t be used in the community, so only NHS staff will be able to have it, at least initially.”

NHS England’s expectation that the first supplies of Pfizer’s product will reach hospitals on and after 7 December depends on the Medicines and Healthcare products Regulatory Agency (MHRA) having approved it in time.

The regulator has been assessing the vaccine for more than a week, since a formal request from the health secretary, Matt Hancock. However, there is a strong belief at the top of the NHS that it will get the green light next week.

An executive at another hospital said: “Officially the assumption is that the government will follow the JCVI’s advice. But in practice the NHS will vaccinate NHS staff with the Pfizer vaccine, and pretty quickly, because of its short shelf life. So it will be NHS staff who get it first.”

In the last week NHS trusts have been urging staff to have their winter flu jab as a matter of urgency before the end of November so that they can have the Covid vaccine. Guidance says there should be a gap of several weeks between them.

Care home residents and those over 80 look increasingly likely to have to wait to be inoculated with the Oxford/AstraZeneca vaccine, which the government on Friday said it had referred to the MHRA.

Unlike the Pfizer vaccine, it does not need to be frozen at -70C to -80C and can be stored in normal fridges and easily moved around by GPs, nurses and health visitors administering jabs in locations such as care homes.

Will everyone in the world have access to a Covid vaccine? – video explainer

One NHS official said the differences in the composition and potential availability of the Pfizer and Oxford vaccines meant the initial rollout “could be stop-start”, with a gap of weeks or even months between frontline health personnel and other priority groups being immunised.

Martin Green, the chief executive of Care England, which represents the UK’s largest care home providers, said the decision was “another case of them [the government] making announcements without being able to fulfil them”.

“We had a commitment that care home residents would be first in the queue,” he said. “The reason is they are most susceptible to death from the virus. That commitment has to be honoured.”

He said the vaccine could be sent directly to care homes, in particular nursing homes with trained medical staff on site. “They knew this was the vaccine and they knew it required little movement so why did they make the announcement it was care home staff and residents first?”

Caroline Abrahams, the director at Age UK, said there was finally “some light at the end of the tunnel” and urged patience. “Although older people are at the greatest risk if they contract Covid-19, the first vaccine that becomes available may not be one that in practice they are able to receive,” she said.

“Hard though it is, we need to be patient while the complex logistics of rolling out these vaccines are worked out. Hopefully, by the spring, a nationwide vaccination programme will be well under way and life will feel much better and safer as a result.”

But Vic Rayner, the executive director of the National Care Forum, which represents not-for-profit care providers, said: “In the spectrum of false promises, this will rank high because the vaccine has been linked to greater safety and greater freedom. The test that the government has outlined … is that efficacy is the only factor that might impact on the prioritisation. To turn back on this would be a betrayal of the most vulnerable and those who support them.”

Senior NHS figures said they felt under significant political pressure from Boris Johnson’s government to get the vaccination programme under way as soon as possible, not only to protect lives but also to help boost the public mood and create optimism after the grim nine months of the pandemic. “We are being led by the nose over this, because of the huge political imperative to start jabbing people before Christmas,” said one executive.

Asked earlier whether there had been governmental pressure to speed up progress of the Oxford vaccine specifically, the prime minister’s spokesman said: “No.” The MHRA has stressed that while it is able to grant one or more vaccines emergency authorisation, its procedures will be as thorough and robust as normal.

The Department of Health and Social Care was approached for comment.