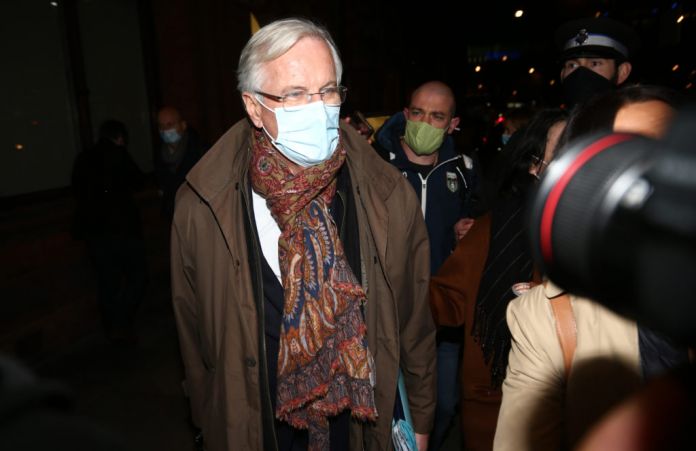 The European Union’s chief Brexit negotiator Michel Barnier has arrived in London ahead of the resumption of face-to-face talks aimed at securing a free trade deal.

Mr Barnier warned earlier on Friday that “significant divergences” remain between the two sides, but his counterpart Lord Frost called on Brussels to respect UK sovereignty.

In-person talks were paused last week after one of the EU team tested positive for coronavirus, but they will resume in London on Saturday.

Mr Barnier arrived in the capital by Eurostar late on Friday, telling reporters that he would continue to work with “patience and determination”.

He earlier tweeted that the “same significant divergences persist”.

Lord Frost, also writing on Twitter earlier in the day, said that while it was “late” to reach a deal – with just over a month until the end of the transition period – an agreement was still “possible”.

He said: “Some people are asking me why we are still talking. My answer is that it’s my job to do my utmost to see if the conditions for a deal exist. It is late, but a deal is still possible, and I will continue to talk until it’s clear that it isn’t.

“But for a deal to be possible it must fully respect UK sovereignty. That is not just a word – it has practical consequences. That includes: controlling our borders; deciding ourselves on a robust and principled subsidy control system; and controlling our fishing waters.

“We look to reach an agreement on this basis, allowing the new beginning to our relationship with the EU which, for our part, we have always wanted. We will continue to work hard to get it – because an agreement on any other basis is not possible.”

Negotiations have been deadlocked for months over the issues of fishing rights, the governance of any deal, and the “level playing field” conditions aimed at preventing unfair competition by cutting standards or increasing state subsidies.

Prior to Mr Barnier’s announcement there had been uncertainty about when the face-to-face talks would resume amid reports that the EU chief negotiator would only head to London if there was a significant shift in the UK’s position.

4/4 We look to reach an agreement on this basis, allowing the new beginning to our relationship with the EU which, for our part, we have always wanted.  We will continue to work hard to get it – because an agreement on any other basis is not possible.

The UK Prime Minister’s official spokesman told a Westminster briefing: “They will resume face-to-face talks from tomorrow (Saturday). Talks will continue to take place on a daily basis.

“At this late stage a deal is still possible and we are working to achieve one.”

Previously, Boris Johnson’s spokesman has said the PM believes the UK would “thrive” with or without an EU deal as talks continued at a virtual level.

The comments came after the Office for Budget Responsibility said that failure to reach an agreement with Brussels could result in a 2 per cent hit to gross domestic product, the standard measure of the size and health of a nation’s economy.

The UK will leave the single market and customs union at the end of December.

Elsewhere, Romanian prime minister Ludovic Orban said he remained confident that a Brexit deal would be reached, saying: “Close to 500,000 Romanians live in the UK.

“A positive and constructive relationship with the UK post-Brexit is a key priority for us. A deal is the best way to secure that.

“With creativity, a pragmatic approach and by respecting agreements and in place legislation, I remain confident we can get this done.”