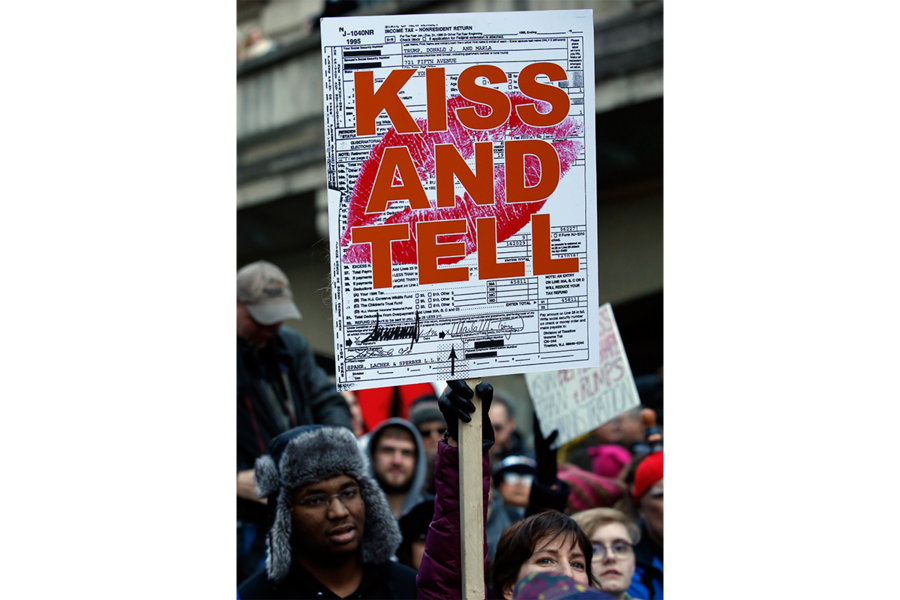 It turns out that Donald Trump and I are members of the same club. Who knew?

But this one is somewhat less exclusive than, say, Mar A Lago.  The president and I, and nearly  5 million other lucky taxpayers, are somewhat reluctant members of The Alternative Minimum Tax club.

At least, Trump and I shared the misery in 2005, when we both paid the AMT. I don’t know whether the president is still a member of our happy club (since he won’t show us his more recent returns) but like many upper middle-income taxpayers, I remain caught in the grip of the dreaded alternative tax. And when nearly every presidential candidate proposes to repeal it, I silently cheer. It is an awful tax. Yet….

As most everyone knows by now, two pages of the president’s 2005 Form 1040 were leaked to author David Cay Johnston, who revealed them with great fanfare last night on the Rachel Maddow show.  That return is a case study for why the AMT, for all its flaws, serves a useful purpose—at least as long as the tax code is such a mess. But it’s mostly strong evidence that the basic law desperately needs fixing.

Mr. Trump and his wife reported about $153 million in positive income on their 2005 return but paid only about $5.3 million in regular income tax after claiming $103 million in losses. That’s an effective tax rate of 3.5 percent, roughly what a middle income couple making in the neighborhood of $40,000 would have paid. And it would have been far lower than the average income tax rate of 19.7 percent paid by others in the top 1 percent of income. The IRS reports that of the richest 400 taxpayers in 2005, just 23 paid an effective rate of 10 percent or less.

But the Trumps didn’t just pay the regular income tax that year. They also got hit with an AMT of more than $31 million. That raised their total federal income tax to about $36.5 million, an effective rate of about 24 percent. That’s roughly in line with the top 0.1 percent of taxpayers and with what many of the Top 400 paid in 2005.

How does the AMT work? It is effectively a parallel income tax that requires you to calculate your taxes twice. The difference: In the AMT you lose the benefit of many tax preferences such as personal exemptions, and the deductions for state and local taxes and miscellaneous business expenses. You also are limited in the benefits you get from business preferences such as net operating losses and depreciation. The AMT rate is relatively flat—26 or 28 percent.

Since we’ve only seen two pages of Trump’s 2005 return, it is not possible to know for sure what accounted for his big AMT bill, though as a resident of high-tax New York City and New York State, losing his state and local tax deduction was surely part of the story. Much has been written about Trump’s use of NOLs, which may have accounted for some of his AMT liability as well. But we really can’t know without seeing more of his return.

Whatever the reason, the AMT effectively did its job. It made sure that a very high income household paid income tax roughly in line with what others in its income bracket paid. And it helped keep the tax code progressive.

But the AMT is a crude last-ditch safety net. The real problem is a revenue code riddled with special breaks that make it possible for some people to dramatically reduce their taxable income and avoid paying large amounts of tax. Because it disallows only certain tax preferences, such as the state and local deduction and personal exemptions, it especially punishes people with large families who live in high tax states. In addition, even though the tax was aimed initially at those with very high incomes (Trump), the victims are more often upper-middle income taxpayers (me).

The AMT isn’t a solution to a leaky tax code, it is a symptom of a flawed law. It is more a white flag of surrender raised by successive congresses that were unwilling to fix the tax code but realized they still needed to limit extreme abuses. Now that we are about to debate tax reform yet again, I hope lawmakers keep the goals and limitations of the AMT in perspective.