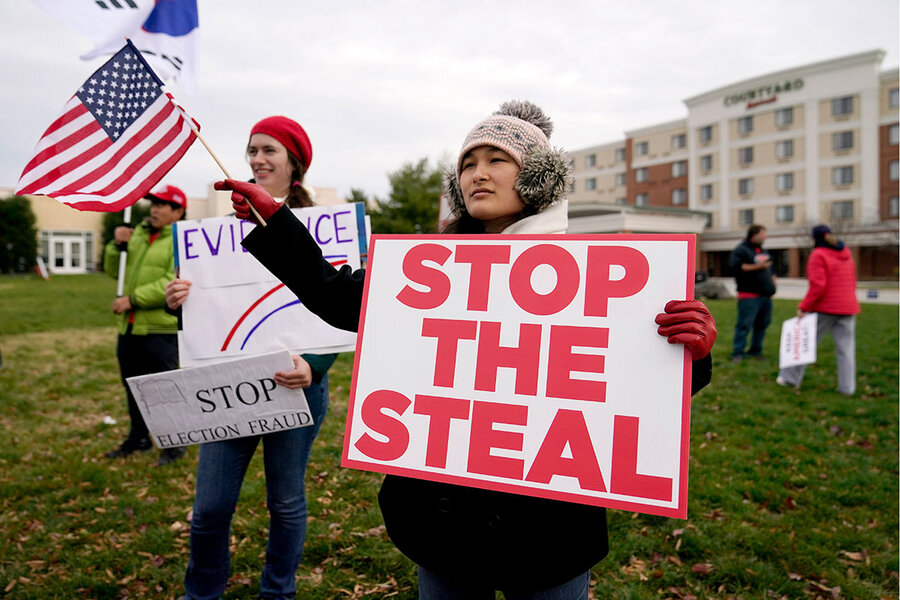 Many Republicans back the president’s resistance. A recent Economist/YouGov poll found that 84% of self-identified members of the GOP believe that Mr. Biden did not legitimately win the election.

But this week marked a turning point in the official transition of power, as the General Services Administration announced Monday that it would begin coordinating with the incoming Biden administration team. Mr. Biden is now receiving the classified President’s Daily Brief of sensitive intelligence information.

States with a total of 270 Electoral College votes – the margin needed for victory – have now certified a Biden victory.

Mr. Trump’s post-vote strategy to prevent the nation from reaching this point consisted of four things:

Direct appeals to the nation that he was the 2020 winner, which began with a White House appearance in the wee hours after the polls closed and continued on Twitter. Court cases meant to stop vote counts or throw out duly cast ballots. Lobbying state and county officials to delay the certification of vote totals. Lobbying state legislators to ignore vote totals and seat pro-Trump electors.

Of these, the court cases have been the weakest link by far. While Trump lawyers and surrogates and right-leaning media have publicized what they claim to be evidence of voter fraud, those cases have largely dissolved upon close attention or constitute too few votes to make any difference. Judges have tossed virtually all the cases filed by the Trump legal team.

Yet the court cases have still had an effect. They have meshed with the president’s communications strategy to portray the 2020 election as “stolen.”

“The lawsuits themselves aren’t posing a legal obstacle. The dangerous thing is that there’s probably at least 40 to 50 million Americans who are buying falsehoods, lies, discredited conspiracy theories,” says Professor Levinson.

The president also broke norms by trying to interfere with the election process in some key states. He brought Michigan state Republican leaders to the White House while some of his surrogates on television were suggesting that those Republicans seat pro-Trump electors in the state, overruling Mr. Biden’s Michigan win. Mr. Trump and his allies also attacked Georgia Secretary of State Brad Raffensperger prior to the state’s vote certification – despite the fact that Mr. Raffensperger voted for him.

These precedents might encourage future losers, particularly in close elections, to decline to concede, file multiple lawsuits, push to overturn state results, and delegitimize the seating of their opponent, all in a hardball attempt to gain power.

“The goal was to undermine not only the election outcome, but our democratic processes,” says Ms. Pérez.

One way to counter this might be more nationwide voting standards and procedures. That could reassure voters that their election systems reflect broad best practices.

Easier registration, with standardized voter databases, would keep voters from being purged from rolls and help allay notional worries about fraud, writes Zeynep Tufekci, a University of North Carolina social scientist, in The New York Times.

Standardized and more common sharing of voter information between states could have the same effect. Required audits after elections – such as Georgia now has – could check for irregularities without the drama involved in asking for recounts or suing states to act.

Voting officials – the unsung heroes of this election cycle – need more resources to do their jobs, adds Ms. Pérez of the Brennan Center. Improved civics education could fill in the gaps in voters’ knowledge, so they have a better idea of when fraud claims are implausible.

Finally, citizens themselves need to stand for democracy.