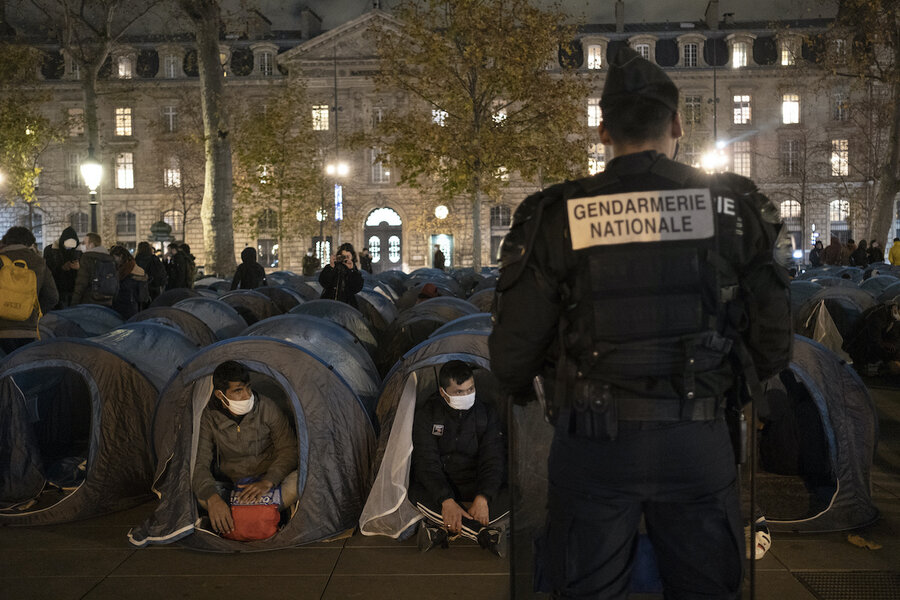 France’s interior minister ordered an internal police investigation Tuesday after officers were filmed tossing migrants out of tents while evacuating a protest camp in Paris.

Aid groups and the government were working to find temporary lodging for hundreds of migrants forcibly removed from the short-lived camp on the Place de la Republique plaza in eastern Paris on Monday night.

The evacuation, filmed by journalists and activists, drew nationwide attention amid tensions over a draft law beefing up police powers that easily passed a vote in France’s lower house of parliament Tuesday.

“Was I shocked by some of the images [of the evacuation]? The answer is yes,” Mr. Darmanin told lawmakers.

But he added: “I reaffirm my confidence in the police prefect [Didier Lallement]. … I am not going to blame all police officers who intervened in this square, nor the prefect of police for the actions of a few of them,” according to Reuters.

His rapid reaction to the outcry stands in contrast to his vigorous defense of police officers in recent months, and to the government’s tepid response to more severe and sustained violence by police at protests by yellow vest activists and others in recent years.

In the Monday night evacuation, police lifted tents with migrants inside, shaking them until they tumbled to the ground, and those who resisted were kicked or beaten with batons, according to the head of aid group Doctors Without Borders in France, Corinne Torre.

Murtaza Khademi was among the dozens of migrants and asylum seekers who had pitched a pop-up tent on the central square. He said he was inside his tent when the police arrived and beat him with batons.

“The police forces had no mercy. We thought they were humane people,” he told Reuters on Tuesday night near a railway station in Paris where charities were distributing food. “They are not like that at all.”

Mr. Khademi said he left his belongings inside the tent, so now he had nothing.

Aid groups and Paris legislators said they set up the protest camp to call attention to the plight of hundreds of migrants who were kicked out of another camp in the shadow of France’s national stadium last week and have been sleeping in the streets since then, for lack of other options.

Most are from Afghanistan, Somalia, and Eritrea, and some have been refused asylum while others are in bureaucratic limbo while they try to apply, Ms. Torre said.

The Paris police headquarters said in a statement that the Republique camp was evacuated because it was illegal, and “invited” the migrants to seek lodging elsewhere offered by the state or aid groups.

The ministers for citizenship and housing said in a statement Tuesday that 240 potential spots in temporary lodging had been located for the migrants, saying they “should be treated with humanity and fraternity.”

The draft law facing a vote Tuesday in the National Assembly is meant to strengthen local police and provide greater protection to all officers. It notably makes it a crime to publish images of officers with intent to cause them harm, a measure that has prompted repeated protests by civil liberties campaigners and media freedom groups.

Thousands of people took to the streets around France Saturday at the urging of civil liberties campaigners and journalist groups to protest the proposed law. In Paris, several thousand demonstrators gathered on the Trocadero square near the Eiffel Tower, chanting “Freedom, freedom” and “Everyone wants to film the police.”

Like many other European countries, France has taken an increasingly tough stance on illegal migration, especially since a massive inflow of refugees and asylum seekers, mostly from Muslim countries in the Middle East and beyond, in 2015-16, reports Reuters.

The issue has driven support for far-right leader Marine Le Pen, who is likely to be President Emmanuel Macron’s main opponent in the next presidential election in 2022.

“I thought that France was a good place and that its people are European, and that’s why we came here, but the immigrants were not well received,” said Mr. Khademi, speaking in Dari, one of the languages used in Afghanistan. Many ordinary French people are supportive, he said, but the police are hostile.

“We have no way back; we have to stay here and endure the situation because we have no other choice.”