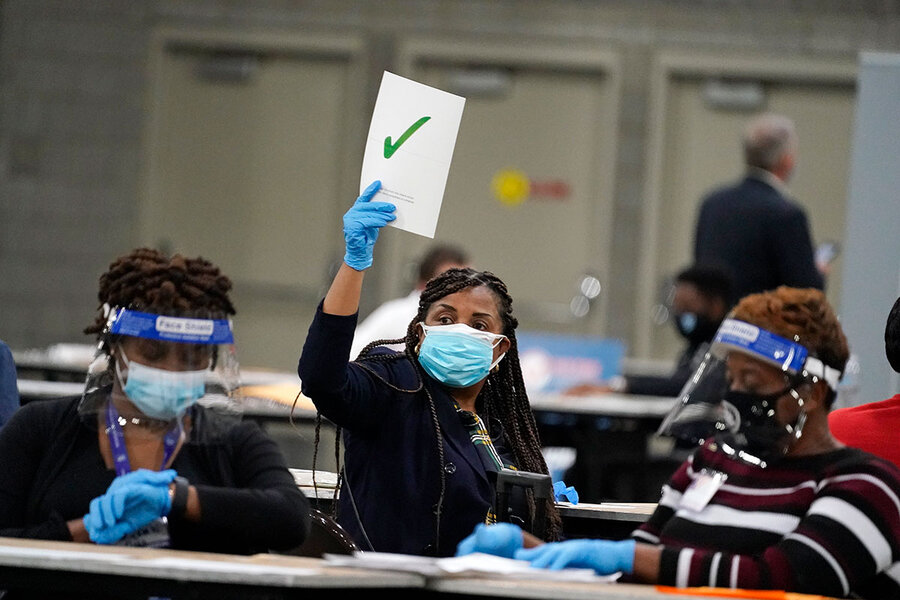 Typically, these certification meetings last 20 minutes and are unremarkable, sparsely attended affairs. Monday’s event was unlike anything Mr. Lawrence has experienced in his more than 15 years on the board. Streamed live on YouTube, it took nearly three hours.

“It’s gratifying to see so many people have a passionate interest in the political process and democracy this year,” says Mr. Lawrence. “But it’s disheartening that some in the community circulate misinformation in an attempt to mislead people.”

The past few weeks have thrust previously obscure election officials into the spotlight in ways few could have imagined. Working long hours to finalize vote counts amid unprecedented scrutiny and new levels of partisan distrust, they’ve endured criticism and death threats, along with grateful praise. And while it’s not over yet, the fact that the nation seems to have made it through this latest test is in some ways testament to the strength of its decentralized system – with scores of largely unknown officials, from county clerks to city commissioners, emerging as unsung heroes on the front lines of American democracy.

Michigan and Pennsylvania’s certification of their results this week dealt a serious blow to President Donald Trump’s efforts to overturn the election, and the president announced on Twitter Monday night that his administration will begin a formal transition process with President-elect Joe Biden’s team. Still, Mr. Trump has not formally conceded – and later tweeted that he is “moving full speed ahead” with legal cases against “the most corrupt election in American political history.”

The president has not produced any concrete evidence of widespread voter fraud. A letter penned by 59 of the country’s top election security experts stated there is “no credible evidence” that the results in any state were compromised.

But Mr. Trump’s unsubstantiated allegations have impacted local officials in every battleground state. After the Trump campaign filed for a partial recount in Wisconsin, reports from a Milwaukee conference hall depicted a chaotic scene, with pro-Trump observers and tabulators clashing in heated disputes. In Michigan’s Wayne County, hundreds of voters participated in a virtual public comment session, condemning the County Board of Canvassers after its two Republican members initially declined to certify the results. Arizona Secretary of State Katie Hobbs has received threats of violence, as has Georgia’s Secretary of State Brad Raffensperger, a self-described conservative Republican.

“I’d like to remind voters that the people who administer elections – from the poll workers at the precinct, to the county and state-level officials – they are people,” says Forrest Lehman, director of elections in Lycoming County, Pennsylvania. “They are not taking sides. They are trying to run a free and fair election, and follow the laws. People should not be so quick to engage in a level of distrust and disrespect that seems to be so prevalent right now.”

“Everything is a plot”

Many election officials note that claims of fraud impugn not just them, but the entire network of employees and volunteers who make elections happen.

In Delaware County, outside Philadelphia, five community members in each of the county’s 428 precincts monitor the election, and they all take an oath before doing so.

“So what you are saying is that those 2,000 people don’t have good character and did not act with integrity,” says Mr. Lawrence, the county board member. “All the people who work so hard to make sure that democracy happens.”

In a meeting last week, Pennsylvania’s Bucks County Commissioner Robert Harvie recalled an exchange he had with an employee early in the morning the day after the election. She had been working for almost 24 hours straight.

“She said, ‘You know, every American should have to come and take part in this process at one point, just to see everything that goes on to make an election happen,’” says Commissioner Harvie. “And I think she’s right.”

Local officials interviewed by the Monitor say they’ve been especially dismayed by how many voters seem to automatically assume malfeasance when something goes wrong.

“We have people reporting every single minor [problem] they may have encountered at the polls,” says Mr. Lehman in Lycoming County. “And there are no reasonable explanations for those circumstances anymore – everything is a plot.”

Clerical errors are seen as a sign of something “nefarious.” Voters have called asking him to make sure their votes were counted, which Mr. Lehman explains is impossible, given that the votes themselves are anonymous. Some of these calls have verged on the violent, with the callers making threats.

“A number of people out there are armed with partial information and looking for things that they perceive to be strange or abnormal that really aren’t,” says J. Manly Parks, the Bureau of Elections solicitor for Delaware County.

During Delaware County’s certification meeting, Mr. Lawrence and his fellow commissioners listened to several public complaints about alleged fraud involving Dominion Voting Systems, a voting technology company that the president and his allies have claimed switched votes from Mr. Trump to Mr. Biden, in what experts describe as an unfounded conspiracy theory.

But Delaware County doesn’t use Dominion technology, says Mr. Lawrence. It never has.

Benefits to a decentralized system

The U.S. election system is so decentralized that it can be confusing – election laws differ from state to state, and operations can vary between counties and even towns. But that diffuse, sometimes messy nature of the system can paradoxically help ensure security.

“The decentralized election system has pluses and minuses, and [security] is one of the pluses,” says Adav Noti, senior director for litigation at the Campaign Legal Center, and former associate general counsel for the Federal Election Commission.

“In 2016, when the Russians were trying to mess with the election, it would have been really difficult for them to do it on the election administration side because there are more than 10,000 election agencies in the country,” says Mr. Noti. “And it makes it hard for any one administration or officeholder to influence the election as well.”

In 1887, following the disputed election between Samuel Tilden and Rutherford Hayes, Congress passed the Electoral Count Act – a federal law establishing how and when electoral votes would be counted by Congress. To ensure that states have time to resolve any disputes and certify their results, the act established a “Safe Harbor” deadline of six days before the Electoral College delegations meet to cast their votes. If states certify their results before the Safe Harbor deadline, Congress, essentially, can’t touch them.

In 2020, states’ electors will cast their ballots (virtually) on December 14, which makes the Safe Harbor deadline December 8. Most states, however, have set certification deadlines ahead of this date.

In the days and weeks leading up to certification, election officials typically receive and count overseas military ballots, which many states allow to arrive after Election Day, as well as provisional ballots, which need to be verified for one reason or another.

“People just assume that we have the election and that’s that,” says Kevin Barnhardt, a member of the Board of Commissioners in Berks County, Pennsylvania, northwest of Philadelphia. “Unless you are an election nerd, you didn’t know that we had all of these processes and rules after the election. It was all just magnified this year.”

In fact, it’s a sign of local officials’ competence, say experts, that much of America likely didn’t know about Safe Harbor deadlines or certification laws before this year.

“These deadlines take place every time. And the fact that we’ve never talked about them before just shows how smoothly it’s gone in years past,” says Casey Burgat, legislative affairs program director at George Washington University. “It’s like referees in a sports game. If you don’t think about them, that means they are doing a good job.”

Even before Election Day, 2020 presented a slate of enormous challenges for those tasked with running elections.

Due to precautions surrounding COVID-19, more than a dozen states expanded absentee or mail-in voting eligibility, and at least another five states plus the District of Columbia decided to send absentee ballot applications to all voters. This year, 43 states plus the district permitted early in-person voting, with almost half of them providing weekend voting.

Long before COVID-19 hit, adequately staffing elections was difficult. Many of the people manning the U.S. electoral system are volunteers or short-term employees who are paid a daily stipend. A congressional report from 2018 found that more than 630,000 poll workers were needed to help voters across 200,000 polling places, with almost two-thirds of jurisdictions reporting that it was difficult to recruit enough workers.

Concerns about staffing grew exponentially in 2020, since at least 58% of 2018’s poll workers were over the age of 60 – the population recommended by health experts to take COVID-19 precautions most seriously.

Some officials now fear that the aggressive criticism leveled at election employees may dissuade people from coming forward to staff future elections.

“For these people who are upset now because they think democracy is being stolen, where is that going to leave democracy when the county election operations are hollowed out because we all leave?” says Mr. Lehman, in Lycoming County. “What will happen to elections after that?”

Yet others see reason to be hopeful, noting that contested elections in the past have sometimes brought more Americans into the political process. Berks County typically has a turnover of 100 to 200 poll workers between elections, but Mr. Barnhardt says they’ve already had more than 500 people inquire about working the polls in future elections.

“All of this spurred a new interest in the political process like never before,” he says. “And that’s a good thing.”