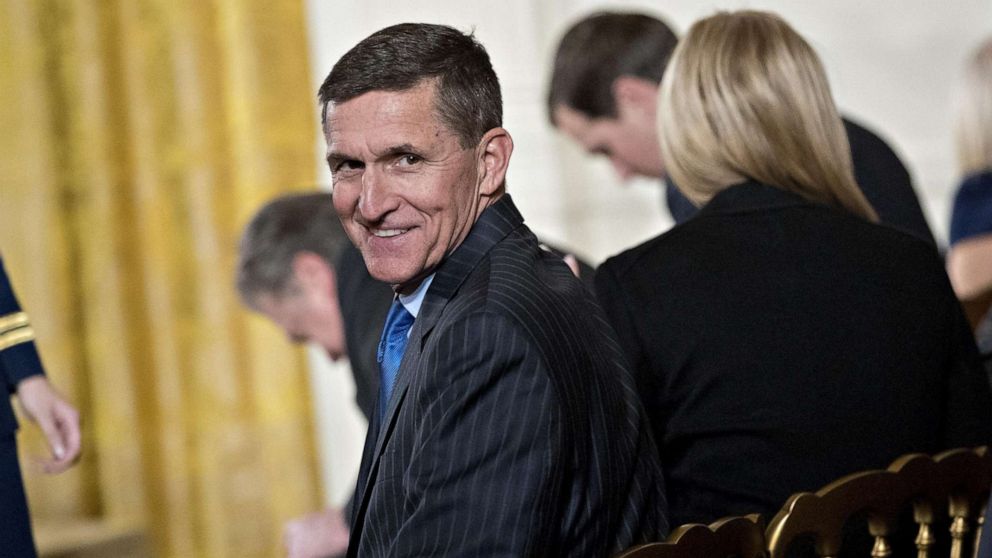 “It is my Great Honor to announce that General Michael T. Flynn has been granted a Full Pardon,” he wrote. “Congratulations to @GenFlynn and his wonderful family, I know you will now have a truly fantastic Thanksgiving!”

Flynn pleaded guilty to making false statements to the FBI during special counsel Robert Mueller’s investigation into Russian interference in the 2016 election.

He pleaded guilty in late 2017 to lying to the FBI about his contacts with former Russian ambassador Sergey Kislyak before seeking to withdraw his plea early this year, alleging misconduct against the agents who investigated him.

White House press secretary Kayleigh McEnany called Flynn “an innocent man” three times in a statement, saying he never should’ve been prosecuted. She did not mention Flynn twice pleading guilty or releasing a statement Dec. 1, 2017, admitting to the crimes and saying “through my faith in God, I am working to set things right” and that he was accepting “full responsibility for my actions.”

“The President has pardoned General Flynn because he should never have been prosecuted,” McEnany said in a statement. “An independent review of General Flynn’s case by the Department of Justice — conducted by respected career professionals — supports this conclusion. In fact, the Department of Justice has firmly concluded that the charges against General Flynn should be dropped. This Full Pardon achieves that objective, finally bringing to an end the relentless, partisan pursuit of an innocent man.”

Attorneys for Flynn and the Department of Justice had a court hearing on Sept. 29 as they continued to push to have Flynn’s guilty plea tossed out.

Former judge John Gleeson, the court-appointed “amicus,” ripped into the Justice Department in a June filing, arguing its move to drop the charges against Flynn was part of a political effort to benefit President Donald Trump’s personal ally.

“In the United States, Presidents do not orchestrate pressure campaigns to get the Justice Department to drop charges against defendants who have pleaded guilty — twice, before two different judges — and whose guilt is obvious,” Gleeson said. “There is clear evidence that this motion reflects a corrupt and politically motivated favor unworthy of our justice system.”

Acting principal assistant U.S. attorney Kenneth Kohl argued that was not the case.

“The allegations against our office that we would somehow operate, or act with a corrupt political motive just are not true,” Kohl said less than two months ago.

The pardon Wednesday, which had been rumored in recent weeks, puts an end to the back-and-forth court cases.

A DOJ official said “the department was not consulted,” but they “were given a heads up today.”

“We would have preferred to see if Judge Sullivan would act and for the matter to be resolved in court,” the official said. “We were confident in the likelihood of our success in the case.”

But, the official added, it “is obviously an appropriate use of the president’s pardon power.”

“Donald Trump has abused the pardon power to reward his friends and political allies, and protect those who lie to cover up for him,” Schiff, the chairman of the House Intelligence Committee, said in a statement. “This time, Trump has once again abused the pardon power to reward Michael Flynn, who chose loyalty to Trump over loyalty to his country.”

“It’s no surprise that Trump would go out just as he came in — crooked to the end,” he added.

“This pardon is undeserved, unprincipled, and one more stain on President Trump’s rapidly diminishing legacy,” the chairman of the House Judiciary Committee said in a statement.

“This pardon is part of a pattern,” he continued. “We saw it before, in the Roger Stone case — where President Trump granted clemency to protect an individual who might have implicated the President in criminal misconduct. We may see it again before President Trump finally leaves office. These actions are an abuse of power and fundamentally undermine the rule of law.”

Flynn, a key adviser on Trump’s 2016 campaign, was named the president’s first national security adviser on Nov. 18, 2016. He was sworn in two days after Trump’s inauguration.

Just four days after his swearing in, the Department of Justice’s then-acting Attorney General Sally Yates informed White House counsel Don McGahn that they were misled and expressed concerns that Russia might try to blackmail Flynn. ABC News confirmed through a source close to Yates that the U.S. captured a phone call between Flynn and Kislyak discussing sanctions leveled by then-President Barack Obama in late 2016.

Flynn resigned on Feb. 13, after less than a month in the position, after he admitted in a letter that he misled then-Vice President-elect Mike Pence about the nature of his calls with the Russian ambassador.

“Unfortunately, because of the fast pace of events, I inadvertently briefed the Vice President Elect and others with incomplete information regarding my phone calls with the Russian Ambassador,” Flynn’s letter read. “I have sincerely apologized to the President and the Vice President, and they have accepted my apology.”