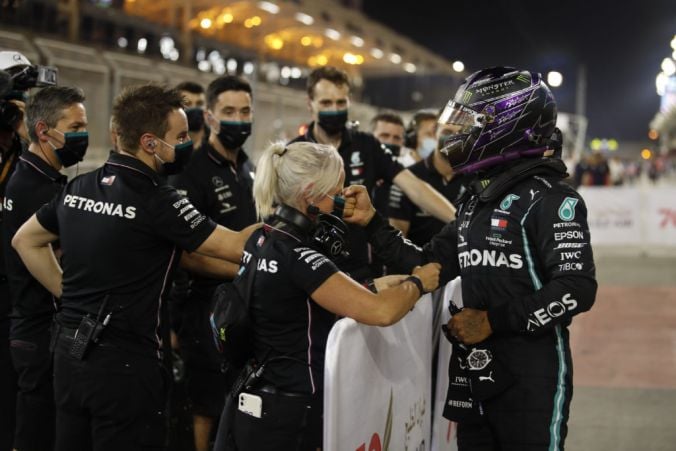 Hamilton continues to dominate the field in 2020, © AP/Press Association Images

Hamilton dazzled under the 495 bulbs that light up the Sakhir Circuit to post a new track record and beat team-mate Valtteri Bottas by 0.289 seconds.

Red Bull’s Max Verstappen will slot in behind the Mercedes cars, finishing in third, four tenths off Hamilton’s blistering pace.

Hamilton galloped to the championship which drew him level with Michael Schumacher with three rounds to spare in Turkey a fortnight ago.

But the 35-year-old Englishman has shown little signs of taking his foot off the throttle here in the desert, topping two of the three practice sessions before securing another pole against his weary opposition.

Hamilton has already won 10 of the 14 races staged in this Covid-disturbed calendar and his 98th career pole leaves him on track to complete his century before the end of the year, with another race in Bahrain next week, before the season finale in Abu Dhabi on December 13.

This also marked Mercedes’ 11th front-row lockout of the campaign.

“I just continue to be amazed by my guys who work so hard, week in week out,” said Hamilton.

“To be up here in Bahrain, I just wanted to come here and enjoy it and that is the most important thing.

“The pressure is off so that was just a release. It is about trying to find the perfect lap, and it was a very clean lap and I was happy with it.”

Alexander Albon is fighting to save his Formula One future, with his seat at Red Bull under threat, and he did little to enhance his prospects by crashing out of practice on Friday.

However, competing in a new chassis after his machine was written off in his practice shunt, Albon qualified fourth, one place ahead of Racing Point’s Sergio Perez who is the front-runner to replace Albon in 2021.

A Ferrari finished fastest in all of the practice sessions and qualifying at this venue last year, but such is the demise of the Scuderia that both Sebastian Vettel and Charles Leclerc failed to make it into the top 10.

Vettel is entering the final weeks of his Ferrari career before he moves to the Racing Point, rebranded as Aston Martin, in 2021. He finished 11th on Saturday, one spot ahead of team-mate Leclerc.

Lance Stroll sprung one of the biggest surprises in recent F1 memory by claiming his maiden career pole at the last round in Istanbul.

But the Canadian will line up 13th in Bahrain, sharing the same row as George Russell after the young Briton preserved his unblemished qualifying record against his Williams team-mates to finish 14th.

Russell’s mighty record now stands at a combined 36-0 against Robert Kubica last year and Nicholas Latifi in 2020. Russell was the best part of one second quicker than Latifi in the sister car.