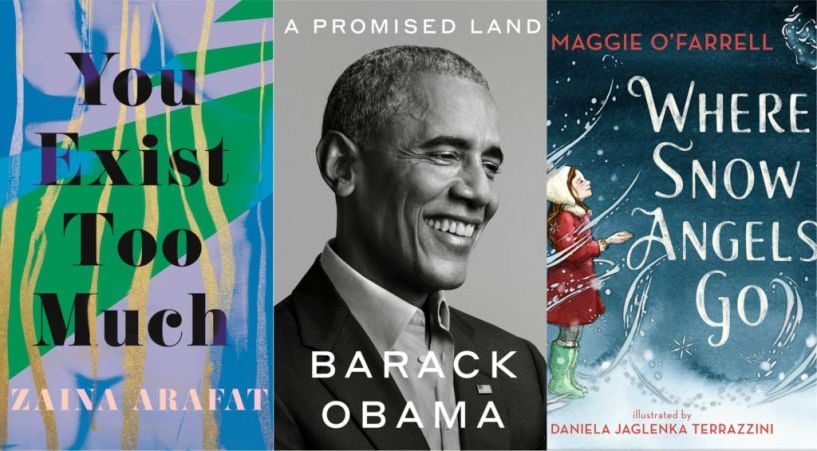 ✨You Exist Too Much✨ by @ZainaArafat

Set between the US and the Middle East, this is an electrifying coming-of-age story about love, identity and sexual desire against the backdrop of traditional values and religious views: https://t.co/CmHEB1rLYJ pic.twitter.com/Tl6GBQEkwl

Real, non-fetishised bisexual characters can be few and far between in literature, but You Exist Too Much isn’t just worth reading for its efforts in representation. It’s a stunning debut from Zaina Arafat, following the life of its nameless narrator: a 20-something Palestinian-American writer struggling with her identity.

The story jumps between her memories of visiting Palestine as a child and growing up in America, and her present day dealings with failed affairs and love addiction.

At its core is a troubled relationship with her mother, who refuses to accept her for who she is. It’s a devastating portrayal of what it’s like to feel as though you never fit in – both in terms of the narrator’s sexuality and racial identity. Arafat handles these weighty topics with real compassion.

2. There’s No Such Thing As An Easy Job by Kikuko Tsumura, translated by Polly Barton, is published in paperback by Bloomsbury, priced £12.99 (ebook £7.49). Available November 26

There's No Such Thing As An Easy Job.

Is there a job out there that requires no reading, no writing, and, if possible, no thinking at all? This is what the protagonist in Kikuko Tsumura’s latest work is searching for. She’s thoroughly burnt out and feels unable to face the working world’s requirements.

After trying five seemingly banal job roles, she finds each time there are hidden mysteries that spark her interest and help her realise her own capability.

Tsumura’s heroine offers some kinship for all those who have often wondered whether a job is right for them, or if the way society views work makes any sense. With hints of magical realism and a quirky approach to chronicling burnout, the novel’s slow approach and focus on the minutiae might lose its readers’ interest.

However, There’s No Such Thing As An Easy Job could be a soothing balm for those pondering some of life’s deeper questions on the nature of how we occupy our time.
7/10
(Review by Rosemin Anderson)

What makes a refugee different from anyone else? Are they transformed by shared experiences, or can they remain individuals with their own inner lives and personal histories? In Blasim’s novel, Hassan Owl, an Iraqi living in Finland, sets out to collect refugees’ stories for his blog, God 99.

The resulting patchwork sketches the dizzying extremes well, from harrowing loss and danger to everyday drudgery. However, Owl’s commentary on the stories and his own life sometimes lacks the same personality and nuance.

Throughout, letters from an unidentified literary translator arrive, and the revelation of their author’s identity at the novel’s climax is one of its most effective moments. While Owl complains that Arab publishers find his prose too vulgar, for English readers the sexual frankness and profanity may no longer shock. At best, they show him dealing with the same banal frustrations and urges as everyone else.
6/10
(Review by Joshua Pugh Ginn)

From his earliest political aspirations to the watershed night in 2008 when he was elected the 44th president of the United States, Barack Obama takes readers on a compelling journey in #APromisedLand.

With not long to go until its release, read more: https://t.co/DaPDR0D6y5 pic.twitter.com/U9bxCvPbxP

This isn’t Barack Obama’s first memoir, but he still takes us through a whistle-stop tour of his life before his presidency; fast forwarding through his childhood in Hawaii and Indonesia, his time at Harvard, entering politics via community organising, before diving into the gruelling years spent as a senator criss-crossing America on the campaign trail, first in a bid to secure the Democratic Party presidential nomination, then battling John McCain in the race for the White House – a race he would, of course, go on to win.

In the first of a two-volume series, the 44th President of the United States chronicles his first two and a half years in office with a knack for simplifying even the most complex political processes, and decades-long conflicts.

A Promised Land is never hard going, but – inevitably for a 701-page tome – some chapters are more compelling than others. Where the brilliantly written book really comes to life is when Obama lets down his guard and gives us a glimpse of the swearing, cigarette-smoking, martini-drinking man behind the myth, offering deliciously acerbic assessments of world leaders.

Exasperation is a recurring theme as the idealistic Obama butts heads with adversaries at home and abroad – it’s reassuring to learn that even the most powerful man on the planet felt helpless at times, and a delight to discover what was really going on behind that seemingly unflappable exterior.

#WhereSnowAngelsGo publishes on Thursday! We love it, @fivekingdoms loves it – we hope you love it too! pic.twitter.com/LDUOXYtrWt

Where do snow angels go? According to this beautifully illustrated book, the impressions left in the ground eventually melt and fade to become our guardians looking on from above. This is a good job, as Sylvie has a habit of finding herself in some scary situations, brought to life with inventive descriptions.

Kids will love the daring protagonist – Sylvie is a young girl not afraid to break the rules, inquisitive enough to push her protector’s limits and defined by her caring nature. Women’s Prize-winning O’Farrell’s debut children’s story is an imaginative tale and a genuine heart-warmer for winter.
8/10
(Review by Sean Coyte)

HARDBACK (FICTION)
1. Shuggie Bain by Douglas Stuart
2. The Thursday Murder Club by Richard Osman
3. A Song For The Dark Times by Ian Rankin
4. Rhythm Of War by Brandon Sanderson
5. The Sentinel by Lee Child & Andrew Child
6. Troubled Blood by Robert Galbraith
7. The Law Of Innocence by Michael Connelly
8. Troy by Stephen Fry
9. Christmas Is Murder by Val McDermid
10. The Midnight Library by Matt Haig
(Compiled by Waterstones)

HARDBACK (NON-FICTION)
1. A Promised Land by Barack Obama
2. Private Eye Annual by Ian Hislop
3. Guinness World Records 2021 by Guinness World Records
4. A Year At The Chateau by Dick Strawbridge & Angel Strawbridge
5. How Animals Saved My Life by Professor Noel Fitzpatrick
6. The Boy, The Mole, The Fox And The Horse by Charlie Mackesy
7. The Broons & Oor Wullie Giftbook: The Lang Arm O’ The Law
8. Frank Get The Door! by Janey Godley
9. Cook, Eat, Repeat by Nigella Lawson
10. Clanlands by Sam Heughan & Graham McTavish
(Compiled by Waterstones)

AUDIOBOOKS (FICTION AND NON-FICTION)
1. A Promised Land by Barack Obama
2. Greenlights by Matthew McConaughey
3. Rhythm Of War by Brandon Sanderson
4. Shuggie Bain by Douglas Stuart
5. Beginner’s Spanish by The Superpolyglotbros
6. The Body In The Marsh by Nick Louth
7. The Thursday Murder Club by Richard Osman
8. Troy by Stephen Fry
9. The Jane Austen Collection by Jane Austen
10. Little Me by Matt Lucas
(Compiled by Audible)