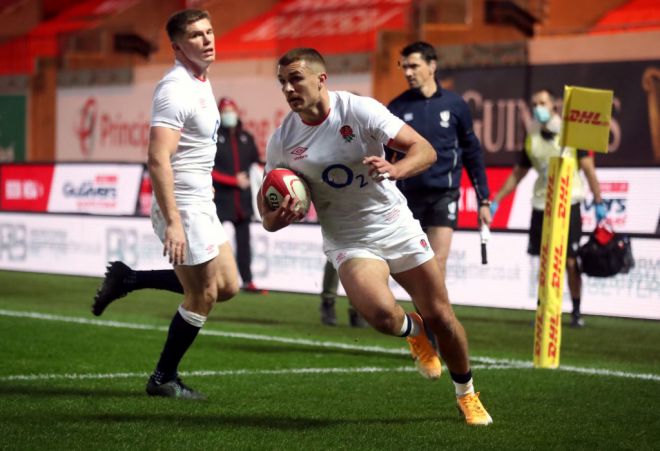 Eddie Jones’ men secured a seventh successive win thanks to tries by centre Henry Slade and prop Mako Vunipola, while Owen Farrell kicked four penalties and a conversion for a 14-point haul.

Wales led through an early Johnny Williams try and it was unquestionably their best performance of the autumn campaign, but the harsh reality now reads seven defeats from the last eight Tests under head coach Wayne Pivac.

England march on, and they can look forward to France – the last team they were beaten by – as probable Nations Cup final opponents at Twickenham on Sunday week.

Many pundits had predicted an overwhelming England win in Llanelli, and while it was more workmanlike than world-beating from the visitors against organised and resilient opponents, they still made it a comfortable case of job done.

Fly-half George Ford returned to the England starting line-up as a solitary change from the side that saw off Ireland last weekend, with skipper Farrell moving into midfield alongside Slade.

England monopolised possession during the early skirmishes, although there was also some solid early defence from Wales with Rees-Zammit accomplished under the high ball, before Farrell missed a 40-metre penalty chance.

Wales then stunned their opponents through an 11th-minute try after Biggar charged down Slade’s kick on halfway.

Bigger reacted quickly to lead a strong counter-attack and Williams then won the touchdown race, scoring on only his second Wales appearance and 18 months after he claimed a try for England in a non-cap game against the Barbarians.

Williams, whose father is from Rhyl, only returned to professional rugby in January this year following chemotherapy treatment for testicular cancer.

England required only four minutes to reply, breaching Wales’ defence when Slade made amends for his earlier error by crossing wide out, but Farrell drifted a second successive kick wide.

Both sides looked to keep ball in hand before Farrell found the target from his third attempt, landing a 30-metre penalty that edged England a point ahead 10 minutes before half-time.

England looked to up the ante as the interval approached, using their forwards to powerful effect and testing Wales’ close-quarter defence.

That growing physical authority was emphasised when Wales conceded a scrum penalty and Farrell kicked the points, giving England an 11-7 interval advantage.

Lock Will Rowlands and scrum-half Rhys Webb also joined the action, but they had been on the pitch less than five minutes before England claimed their second try.

Relentless forward pressure took its toll, with Wales unable to keep a heavyweight pack out from close range as Mako Vunipola touched down and Farrell converted for an 11-point lead.

Biggar reduced the arrears when he kicked a penalty with 25 minutes left, and then a second successful three-pointer shortly afterwards reminded England that they were not home and dry.

But Farrell completed his penalty hat-trick 15 minutes from time before a fourth successful strike broke Wales’ resistance and ensured that England continued on an unbeaten run that has lasted since early February.