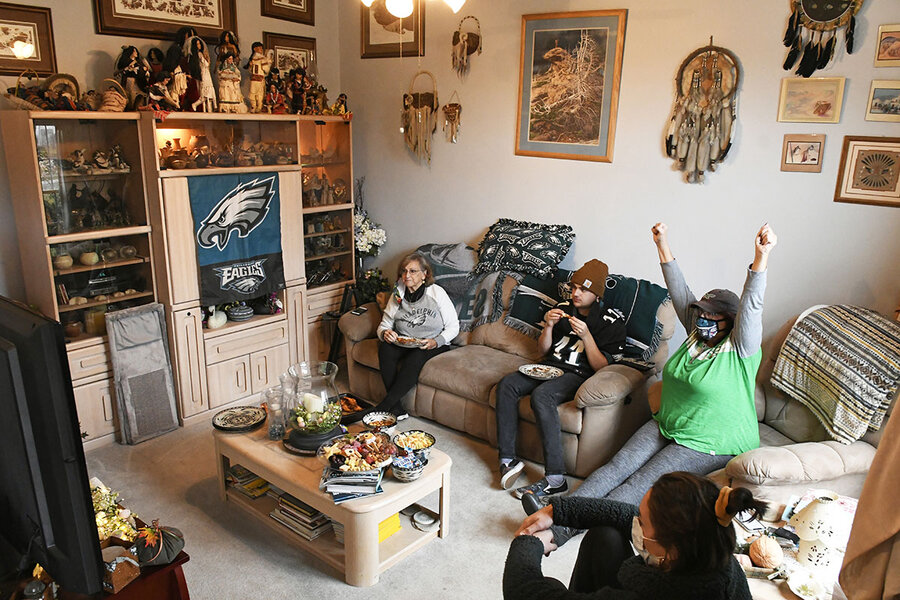 This is no year to be an Eagles fan, and not only because they’re having such a bad season.

As elsewhere in sports, the coronavirus can dominate the game. Lincoln Financial Field is eerily quiet, its only attendees cardboard, its fan noise engineered. Gone is the team’s anthem, “Fly, Eagles Fly” – a rousing, 70,000-voice love song taught to babies (in good years at least). In normal times, it brings a proud tear to the eye of everyone who was within a snowball’s distance of these parts in 2018. That was when a second-string QB with a silly trick play swiped the Super Bowl from the mighty New England Patriots. That was when fans lined the sidewalks 10 deep for a victory parade and committed to memory the expletive-laden speech from the team’s center Jason Kelce, who dressed in homage to another Philadelphia love: the Mummers Parade.

Maybe you had to be there.

But if social distance is the antithesis of the football experience, maybe the team’s off year is an acceptable time for it. During the few brief weeks some fans were allowed in the stadium, many took a pass. “If you’re not high-fiving, if you’re not tailgating, if you’re not dancing around, I’m really not that interested in it,” explains Michael Diaz, devoted season ticket holder and spokesman for The Green Legion, which organizes events and travel for Philadelphia sports fans.

There’s a lot of “everyone” in sports here, as in, “What’s everyone doing for the game?” But COVID-19 has assailed the hearth around which much of the city gathers on Sundays. (And today, when the Eagles play the Seattle Seahawks in the “Monday Night Football” slot.) The pandemic has broken things down, segmenting the vast and interconnected community once flocking to the game and packing bars, Jersey Shore decks, city apartment gatherings, and family parties. “Fly, Eagles Fly” has become a potential superspreader.

But people are adapting to COVID-19 days. Deb Kurtz of Pennsylvania’s Lancaster County cut her teeth on football, a family passion. She was the game day buddy of her late father, a season ticket holder. The legendary Eagles flanker Tommy McDonald came to her wedding. Now a widow, she’s gone to games with her 24-year-old son, Wyatt, typically arriving in Philly by 9 a.m. to make the tailgate rounds. With roughly 30 other regulars, they’ve traveled to two or three away games a year. There’s also been the occasional wedding of fellow fans, or a special, non-game-related group vacation. These people are family, Ms. Kurtz explains. “I could count on these people. They’d probably give you their last dollar if they had to.”

This year, Ms. Kurtz spends game day with her real family, whose COVID-19 circle is tight. They brought the TV outside and raised a tent for the season opener. Now she heatedly argues football in person with her brother, to the chagrin of her sister-in-law. Her father-in-law, being a Dallas Cowboys fan, is not welcome, or at least that’s what they’re telling people. Her mom, who spent much of the spring isolated in assisted living, told the family when they were watching the game one recent Sunday, “I love this.”

In the bleak days of March, Ms. Kurtz formed a Facebook page for her traveling group, and now they meet each week via Zoom. One Thursday evening this month, they were in no rush to talk Eagles, instead catching up with each other’s week. When talk turned to the recent elections, Ms. Kurtz firmly pivoted to the Birds and the pace picked up, with the same surly commiserating normally done in person: The injuries. The bad trades. The coaching problems. There was profanity, hyperbole, teasing, and trash talk – all the angst of The Fan interspersed with reliving sports highlights past.

What makes football such a magnet? Some say it’s the values: motivation, overcoming adversity, getting knocked down and getting back up. The great Green Bay Packers coach Vince Lombardi famously compared the game to life itself: It “teaches that work, sacrifice, perseverance, competitive drive, selflessness and respect for authority is the price that each and every one of us must pay to achieve any goal that is worthwhile.”

Plus, the game is easy to understand (according to fans, at least). And it’s easy to plan for, since it usually happens on a Sunday. People can disagree vigorously, can argue about play-calling, the pass rush, or other points seemingly trivial without damage to a friendship.

And there’s the overt patriotism – the flyovers, the show of first responder pride, especially the national anthem. Of course the anthem itself has been the center of a controversy so heated that it is widely seen as the cause of NFL ratings declines in recent years. Whether or not taking a knee during the national anthem – a movement Colin Kaepernick began in 2016 to draw attention to racial inequities – is disrespectful to the nation, the flag, or veterans, the injecting of politics into the game alienates many who see sports as a unifier across racial lines.

Business has fallen 90% this year for Joe Abruzzo, longtime owner of Bayou Bar & Grill in Philadelphia, which fans usually pack to the rafters on game day. He believes football’s drift into politics contributed to the drop. Whether the Bayou will survive the virus and the politics is unclear. “People come here to relax and be entertained,” he says, “and it’s really hard for people to come in without bringing in what’s outside – ‘this player said this and this one said that.’”

The fact of being fellow fans typically bridges identity differences, especially when it comes to playing heated rivals. For the Eagles, that would be the all-American, multi-Super Bowl-winning, do-no-wrong Cowboys. “Our livelihoods and our values and the direction of the country don’t depend on the outcomes of ballgames, and a strong geographic/cultural identity and an us-vs.-them mentality actually spice up the whole enterprise,” observed Mike Sielski in his Philadelphia Inquirer sports column recently.

When one city sports executive recently suggested a reimagining of the Philadelphia fan – retiring the lunch bucket, battery-throwing, jail-in-the-stadium stereotype for a “New Philadelphia” narrative focusing on the arts, culture, education, and diversity – he got an old-Philly-style boo. “The blinkered passion for the local teams, the fan base’s long institutional memory, the self-identification as underdogs – is a big part of what makes Philadelphia sports so much fun,” wrote Mr. Sielski.

For some actual, on-field fun, fans here look to the future. Maybe the team will rebuild? Get healthy? Welcome back Travis Fulgham, the receiver who came out of nowhere to become this year’s silver lining? Next season, Tom Brady’s coming to town with the Buccaneers, and there’s a big on-the-road matchup with the Las Vegas Raiders. “Everyone’s going to Vegas,” predicts Mr. Diaz. Everyone here knows that the thing with feathers is hope.