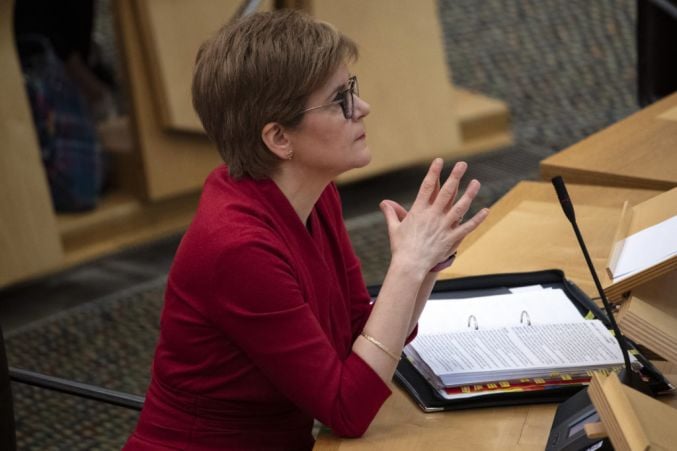 Nicola Sturgeon has said UK Prime Minister Boris Johnson should not follow the Donald Trump’s example on democracy by standing in the way of another Scottish independence referendum.

The Scottish First Minister compared the two politicians in a point about democracy, hoping Mr Johnson will not act in a similar fashion to the US president after his recent election defeat.

More than a dozen consecutive opinion polls have indicated Scotland’s voters now being in favour of independence despite voting down the idea in 2014, with support also high for the SNP ahead of the next Holyrood election in May 2021.

Speaking on the final day of the SNP conference, Ms Sturgeon was asked by GMB host Piers Morgan how she would make another independence referendum happen if she was told no by Mr Johnson.

She replied: “The first thing I’m going to do is get the authority of the people of Scotland and if Boris Johnson chooses to stand in its way, I’ll set out then the steps we will take, but I’m going to put my faith in democracy.

“Across the Atlantic with Boris Johnson’s pal – I know he used to be a pal of yours as well – we see what happens to politicians who try to stand in the way of the tide of democracy, they get swept away.

“This is about democracy and the ability of the people of Scotland to decide their own future.”

She reiterated the point on BBC Breakfast, adding: “I know Boris Johnson looks to Donald Trump for many things – perhaps you should look and learn in that respect as well.”

Ms Sturgeon was also asked by the BBC if she would hold an advisory poll without the consent of the Westminster, but said this is not something that had been tested by the courts.

She said: “I am absolutely clear that any referendum has to be legal because if it is not legal then we won’t win the authority that we need to make Scotland independent, I’ve always been clear about that.

“The point I made earlier on is that this issue of whether that needs Westminster consent – which we’ve always as a matter of fact in the past accepted that’s the best way of doing things – that’s never actually been tested in court.

“If we all agree to abide by the democratic will of the Scottish people there’s no reason why it should have to be tested in court, let’s allow democracy to be the decider here.

“Scotland won’t become independent if people don’t want to be independent, the polls suggest it is now the majority view in Scotland but I don’t take anything for granted and of course I’ll only get the authority from the Scottish people to have a referendum if we win the election next May.

“At every step of the way here, it’s democracy that we should trust to guide us.”