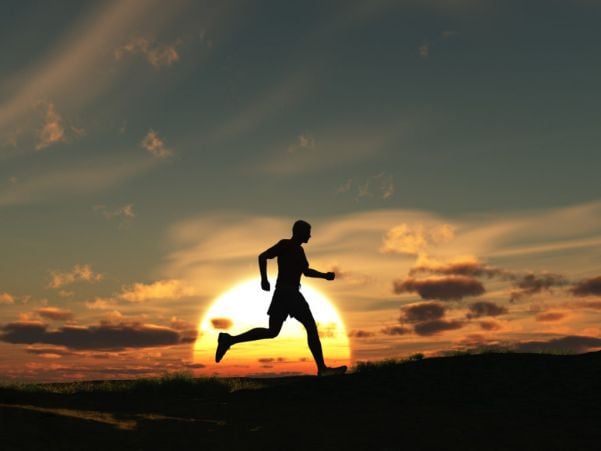 Of the many, many reasons why pandemics are particularly rubbish during winter, the fact it’s pitch dark when you finish work surely ranks near the top.

This does of course happen every year, but the lack of well-lit indoor options means it feels like a brand-new imposition.

With gyms struggling to stay open for any length of time, most fitness fanatics have two options – do push-ups in your bedroom, or brave the bleak outdoors. Here’s a few things you’ll understand if you’ve had to embrace the horrors of exercising in the dark…

Running sucks. Running in the dark is infinitely worse.

There’s a reason bears hibernate through winter, and all the season’s supposed charms involve snuggling up against the inky blackness outside. The bigger the gap between your indoor and outdoor environments, the less appetising exercise becomes, and right now, leaving home feels like getting out of bed on a cold Sunday morning.

Why can it never just be dark? Why must the seasons conspire to ensure it’s also wet, windy and cold?

2. You keep telling yourself you’ll go straight after work

If you were sensible, you’d exercise immediately after work, while your faculties are still firing and you’re yet to submit to the sofa. If you were really sensible, you’d wake up and exercise early, leaving the long winter evenings free for cocoa and telly. And if you were so sensible it’s borderline psychopathic, you’d go running in your lunch break, and sidestep night-time exercise entirely. Don’t worry, no one is sensible.

3. Your body gets confused

Humans are hard-wired to go down with the sun, and exercising after dark is as counter-intuitive for your body as it is for your mind. You might return exhausted and collapse ahead of schedule, or your biorhythms might infer that it’s party time and spread your endorphins through the night. There’s no obvious logic to it. It’s all just part of the fun.

4. It’s hard to know how many clothes to wear

You’re exercising, so you should wear shorts and a vest. But it’s two degrees, so you should wear a ski jacket and balaclava. Sadly you can’t just average them out and go running in jeans and a shirt. One school of thought holds that you should wear more clothes because you can always take some off, but unless you bring a bag, those clothes then billow comically in the wind like the world’s frumpiest cape.

Like flowerbeds, puddles, and other people’s dogs, Autumn leaves are great to admire during the day, and potentially hazardous to step on after dark. Particularly in wet conditions, fallen foliage turns the average pavement into an ice rink, leaving you skidding and sliding like a baby giraffe in high wind.

You could slow down, turn on your torch and tread with care, but the resulting run might be closer to hopscotch than cardio.

6. It’s different for men and women

The gender gap is pretty stark, and running solo through a dark park can be super uncomfortable for women in particular. Head torches are absolutely a thing, if you’re willing to embrace abandoned-mineshaft-chic, and there’s a lot to be said for teaming up with a neighbour or nearby friend. On the plus side, a fear of night-time ne’er do wells is great motivation for smashing that PB.

I almost lost my shoe running in the dark BAHAHAHA 🥲

7. It makes you really miss the gym

People with home gyms: We both congratulate and hate you. The 2019 answer to winter workouts, pre-pandemic you could enjoy brightly lit exercise at all hours simply by being indoors. You don’t know what you’ve got til it’s gone, and we had water fountains, treadmills, and overhead lighting.

8. It messes with dinner time

You can exercise before dinner, and return home dreaming of protein shakes with your metabolism a mess. Or you can exercise afterwards, and hiccough your way through a sluggish trudge feeling ever-so-slightly ill.

Running in the dark is actually kind of nice with all of the Christmas lights people already have up.

9. Summer is going to be great

Picture the scene: It’s a balmy evening in late July, as you stretch against a bench clad in climate-appropriate leggings. You can see trees trembling in the breeze, pigeons foraging for breadcrumbs, and couples taking strolls in the early evening glow.

It’s absolute bliss. Then you remember you still have to go for a run.