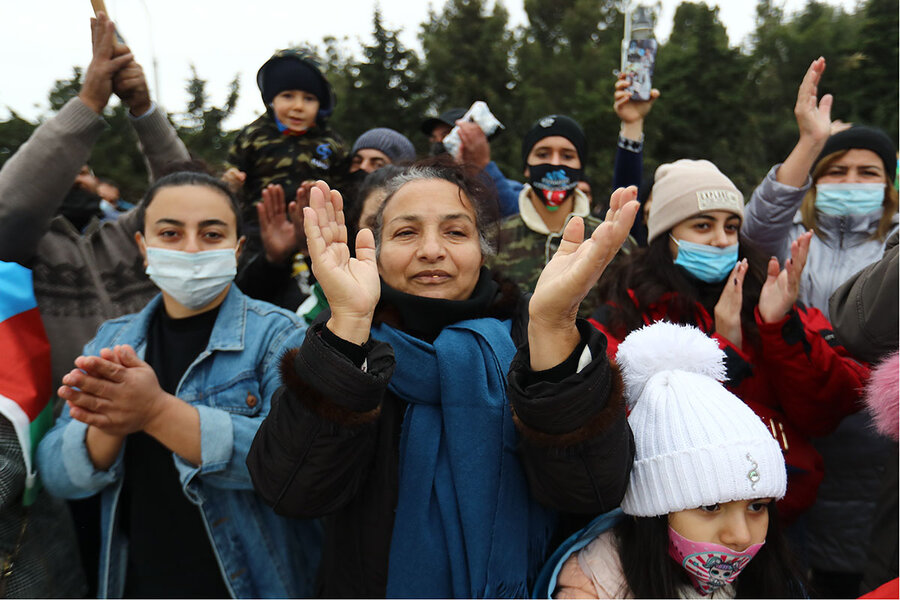 This autumn’s intense six-week war between Armenia and Azerbaijan offers a stark lesson in the costs of diplomatic failure: An unresolved territorial dispute suddenly erupted in violence that took thousands of lives and left a vastly changed landscape in its wake.

Azerbaijan won the war with arms and advice from Turkey, dramatically reversing Armenia’s decisive victory a quarter century ago that had been frozen in place since 1994.

The nub of the conflict is the Armenian-populated exclave of Nagorno-Karabakh, a Soviet-era autonomous region inside Azerbaijan that declared independence in 1988 as the USSR began to crumble. In the long and bloody war that ensued, Armenian forces not only secured the region, they occupied a huge swath of additional territory and expelled around 800,000 ethnic Azeris from it.

The new armistice, which Russia imposed last month, restores all of those illegally seized lands to Azerbaijan and inserts 2,000 Russian peacekeeping troops into the area to enforce the deal. Turkey is also expected to play a role. But the accord leaves the original problem, the status of Nagorno-Karabakh – now under Russian protection – to be settled by future negotiations.

This dramatic outcome has triggered mass jubilation in Azerbaijan, plunged Armenia into a storm of national anguish, and left international diplomacy licking its wounds. The cease-fire lines brokered by Moscow almost exactly follow the diplomatic settlement that the international community had advocated for almost 30 years, but they were achieved by force of arms.

The Minsk Group, comprising the United States, France, and Russia, which had been charged with resolving the conflict, proved irrelevant as the crisis climaxed; it was two regional powers, Russia and Turkey, that brought the warring parties to heel.

Now, says Sergei Markedonov, an expert with the Institute for International Studies, a think tank attached to the official MGIMO University in Moscow, “diplomacy will be given a fresh opportunity to work something out.”

But “it is not going to be easy,” he adds, because “that small territory is seen as a key element in the national identities of both Armenia and Azerbaijan.”

Some of the 100,000 Armenians who fled Nagorno-Karabakh during the war are starting to trickle back to their homes through the Lachin Corridor, a slender land link between Armenia and Nagorno-Karabakh that is now secured by Russian forces. Many other residents had burned their houses as they left, rather than hand them over to the advancing Azeris.

Those who do return are facing a very uncertain future, and Azeri ideas of a permanent settlement appear to have hardened. Nagorno-Karabakh’s 28-year-long dream of independence is clearly shattered, and even a return to something like Soviet-era autonomy, which gave the Armenian population a great deal of linguistic, cultural, and political leeway, now seems off the table.

“Azerbaijan was ready to grant autonomy to the Armenians of Nagorno-Karabakh if Armenia had been ready to accept a peaceful resolution of the conflict,” says Farid Shafiyev, president of the independent Center of Analysis of International Relations in the Azeri capital, Baku.

However, since Armenia never accepted the diplomatic solutions offered, Azerbaijan was compelled to fight for the land “at very great cost in lives of our soldiers,” he says.

“Now conditions have changed. Armenians who want to live in Azerbaijan in future may enjoy the same privileges as other minorities, such as Kurds, Jews, and Russians, whose language, religion, and other rights are protected by law,” Mr. Shafiyev predicts.

The victorious war has made a public hero of Azerbaijan’s hereditary despot, Ilham Aliyev.

Some people are concerned that the Russian peacekeeping force on Azeri soil, due to stay five years, “might turn into a permanent Russian military presence,” says Ilgar Velizade, an independent political analyst in Baku.

“But this peace deal looks workable. It registers the geopolitical reality in our region, and reflects the will of the two leading powers, Russia and Turkey. It provides a basis for these two to cooperate here in the long term.”

In Armenia, the sense of shock and denial has been magnified by a national historical memory that associates the fate of Nagorno-Karabakh with the genocide committed against Armenians by the Ottoman Turks just over a century ago. (One reason for Armenia’s reluctance to negotiate over the seven occupied Azeri districts around Karabakh has been its lack of trust in Azerbaijan, a Turkic-speaking nation closely aligned with Turkey.)

“I understand the feelings of many Armenians and the trauma they have suffered” from their unexpectedly swift defeat, says Mr. Markedonov. “But they should realize that without Russia stepping in and imposing this cease-fire, the Armenian defeat might have been much worse.”

And the angry crowds and opposition leaders who have been demanding that Prime Minister Nikol Pashinyan resign for conceding defeat are themselves partly to blame, argues Gayane Ayvazyan, a historian and peace activist in the Armenian capital, Yerevan.

“These people are the same ex-leadership who insisted on never negotiating, never giving an inch,” she says. “They fed us incessant militarization and war propaganda. Now they want Pashinyan to leave because he had no choice but to accept a defeat that they bear great responsibility for.”

It’s a pity, she adds, that Armenia’s pro-democracy movement two years ago, which brought Mr. Pashinyan to power, failed to recognize that resolving the frozen conflict over Nagorno-Karabakh was critical to building a healthy, lasting democracy.

For Russia, even though it may now have to share its regional influence with Turkey, the armistice is a satisfying outcome that has solidified its role and strengthened its grip on Armenia.

“As a result of this, Armenia is under Russian patronage much more than before,” says Fyodor Lukyanov, editor of Russia in Global Affairs, a Moscow-based foreign policy journal. “That’s a very strategic neighborhood so, even after five years of peacekeeping, Russia may well decide a permanent presence is called for.”