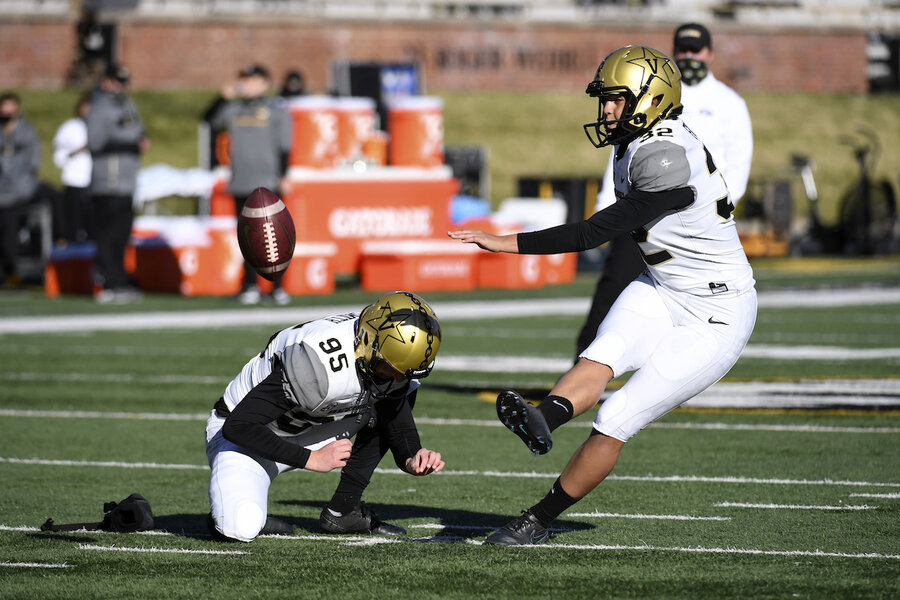 Sarah Fuller was playing around with a teammate a couple months ago when she kicked a soccer ball through the uprights from 45 yards away. During the Southeastern Conference soccer tournament, she joked about being able to kick a football.

On Saturday, she did – and she made history.

Ms. Fuller became the first woman to participate in a Power Five conference football game when she kicked off for Vanderbilt to start the second half at Missouri, a moment that may take some time to soak in for her.

“I just think it’s incredible that I am able to do this, and all I want to do is be a good influence to the young girls out there because there were times [where] I struggled in sports,” Ms. Fuller said. “But I am so thankful I stuck with it, and it’s given me so many opportunities. I’ve met so many amazing people through sports, and I just want to say literally you can do anything you set your mind to.”

Ms. Fuller kicked with a holder rather than using a tee in a designed squib kick. The senior sent a low kick to the 35-yard line where it was pounced on by Missouri’s Mason Pack. Ms. Fuller didn’t get any other opportunities in Vanderbilt’s 41-0 loss to Missouri.

Coach Derek Mason made clear that Ms. Fuller kicked for the Commodores due to need, not for history or publicity. COVID-19 protocols and restrictions left Mr. Mason with very few options, prompting him to reach out to the soccer team for help.

Ms. Fuller, a 6-foot-2 goalkeeper, decided she was up for the challenge.

“I’m not about making statements,” Mr. Mason said. “This was out of necessity. You look at our week. Our students had gone home. The ability to have access to students and tryouts was almost nil in terms of what’s available. … That just happened to be the most viable option.”

After Ms. Fuller’s kick, she went straight to the sideline, where she high-fived some of her new teammates and swapped some elbow bumps. Ms. Fuller’s parents watched and cheered from the stands along with her boyfriend and best friend.

She had the phrase “Play Like A Girl” printed on the back of her helmet. The senior will get to keep the No. 32 jersey she wore Saturday, the same as her number when playing soccer.

Ms. Fuller even gave a halftime pep talk, which she usually left to her soccer teammates, telling her new teammates on the football team that Vanderbilt won the SEC soccer tournament title by cheering for each other whether on the field or the sideline.

“We had a different mindset coming out the second half,” quarterback Mike Wright said.

After her kickoff, reaction poured in on social media. Ms. Fuller was the No. 2 trending topic on Twitter, followed by Vanderbilt. Her soccer team wrote on Twitter: “Glass. Everywhere.” – in a reference to the glass ceiling she had shattered.

Pat McAfee, a former NFL punter, reviewed Ms. Fuller’s squib kick, noting the ball didn’t go out of bounds and there was no chance of a return, setting up the defense.

“Congrats to @SarahFuller_27 for being THE FIRST EVER WOMAN TO KICKOFF A POWER 5 GAME,” Mr. McAfee wrote in a tweet. “Incredibly rare to be the ‘1st ever person to do something’ these days..this is really cool.”

While no woman had appeared in an SEC football game or on any Power Five team, Liz Heaston became the first woman to score in a college football game with two extra points for Willamette University in the NAIA on Oct. 18, 1997.

Katie Hnida was the first woman to score at the Football Bowl Subdivision level with two extra points for New Mexico on Aug. 30, 2003.

April Goss was the second, with an extra point for Kent State in 2015. Tonya Butler was the first woman to kick a field goal in an NCAA game for Division II West Alabama on Sept. 13, 2003.

“Welcome to the club,” Ms. Hnida wrote on Twitter on Friday, adding that she and Ms. Goss “are waiting with snacks!”

Missouri coach Eli Drinkwitz visited with Ms. Fuller before kickoff and repeated a message that Ms. Fuller has heard a lot in recent days. The father of four daughters told Ms. Fuller it was incredible they watched her make history.

“I’ve had … dads come up to me and they’re like, ‘You’re inspiring my little girls, and I want them to know that they can do anything and you’re proving that point.’ And I think that has been the coolest thing,” Ms. Fuller said.

Ms. Fuller also made clear she’d be up for continuing to help the football team if needed. She believes she can refine her timing and technique with more practice.

“If she wants to kick and she’s available, we’d love to have her,” Mr. Mason said.