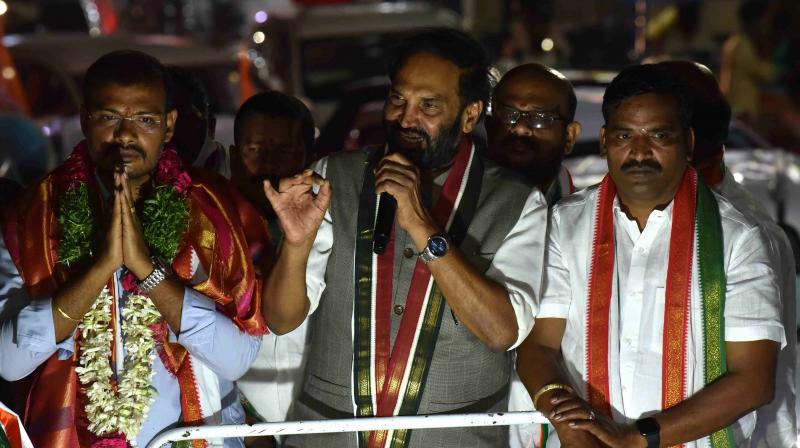 HYDERABAD:  Telangana Pradesh Congress Committee president N. Uttam Kumar Reddy said that the people of Greater Hyderabad would never forgive the TRS, BJP and the MIM for not discussing the real problems of the people during the election campaign while keeping their focus only on polarisation on communal lines.

The TPCC chief said that the Congress was the only party which raised people's issues and proposed possible solutions in its manifesto. He said that they never believed in polarisation or other such tactics to win elections. It always adopted a straight approach, which was to resolve issues concerning people.

Uttam Kumar Reddy said that none of the Union ministers, state ministers and other top leaders would ever visit the lanes or by-lanes of Hyderabad once the election campaign concludes on Sunday. Therefore, he said that people should not get carried away with the fake promises being made by the BJP and TRS leadership.

"The TRS government in Telangana state and the BJP government at the Centre have stopped resolving people's grievances for a long time. MIM deserves no special mention as its role is confined to that of a B-team of BJP and RSS. Presently, the Congress is the only party which is serious about serving the people," he said.

"The TRS, BJP and MIM are seeking people's votes just to win the GHMC elections. But the Congress party is seeking votes only to address people's problems in the right earnest. Hence, the electorate should take a conscious decision and vote judiciously to ensure that the right leaders represent them in GHMC for the next five years," he said.