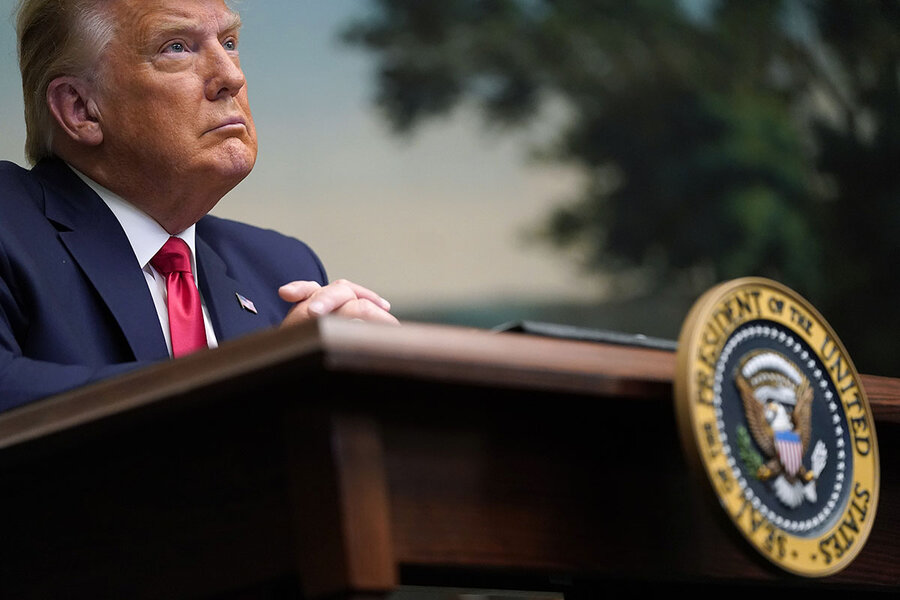 Drama has long been essential to President Donald Trump’s brand, and the post-2020 election period is delivering in spades.

President Trump’s legal challenges to the election results in multiple states are Exhibit A. But as that fight reaches its denouement, after repeated defeats in court, a more concretely impactful kind of drama is playing out: apparent efforts to tie an incoming Biden administration’s hands on both domestic and foreign policy.

From a raft of end-of-term regulations and executive orders, to the Treasury’s move to “claw back” hundreds of billions of dollars in unspent emergency-lending funds, to a host of foreign-policy actions that could limit President-elect Joe Biden’s room for maneuver, Mr. Trump and his team have been busy.

American history is replete with messy presidential transitions, including the contested election of 2000 – when the W’s from some office computers were famously removed as George W. Bush prepared to take over, symbolic of the deep animosity that accompanied the arrival of the new president.

But the conflicts marking the current changeover stand to be among the most consequential.

“In modern memory, from what I’ve seen, this is going to be one of the most challenging transitions in the country’s history,” says Rudy Mehrbani, a senior adviser at the nonpartisan Democracy Fund Voice.

Even if everything were going smoothly and the outgoing and incoming administrations were working hand in glove, this transition would be difficult, he adds.

“But when you add the crises we’re facing as a nation, combined with the shorter transition period, and now combined with Trump’s intentional efforts to obstruct the new administration, the potential toll on human health and lives could be disastrous though impossible to ever quantify,” says Mr. Mehrbani, a former member of the White House Transition Coordinating Council under President Barack Obama.

In the domestic sphere, examples of controversial end-of-term moves by the White House and federal agencies include:

Dozens of government regulations, with sped-up timelines for approval, that affect food and worker safety, oil drilling in national parks, migrant workers, food stamps, endangered species, transgender people, refugees, and federal executions, among other issues. Treasury Secretary Steven Mnuchin’s move to put $455 billion in unspent COVID-19 stimulus relief money back in the Treasury’s general fund. Janet Yellen, the incoming secretary, if confirmed, would have to get permission from Congress to access the funds for that purpose. Secretary Mnuchin denies he is trying to hinder the incoming Biden administration. A major change to the federal civil service – called the biggest in generations – that would reclassify tens of thousands of career employees into political appointees, removing job protections. Such a move would make it easier, for example, for the current president to fire Anthony Fauci, the nation’s leading epidemiologist, with whom he has clashed.

Already, the Oct. 21 executive order signed by Mr. Trump is reportedly accelerating at a key agency, the Office of Management and Budget. Reclassifying employees at other agencies is also being “fast-tracked” ahead of the Jan. 19 deadline into the new job category, known as “Schedule F.”

On his first day in office, Mr. Biden is expected to sign dozens of executive orders reversing many of Mr. Trump’s – including his orders quitting the Paris climate accord and the World Health Organization – but unwinding the Schedule F move won’t be easy. Employees who have been fired can’t necessarily be instantly rehired, nor can those hired under the new job category be immediately dismissed.

Mr. Biden is also expected to try to make use of the Congressional Review Act (CRA), which allows for the overturning of regulations within a certain period. Though if Democrats don’t win the two U.S. Senate seats up for grabs in a Jan. 5 runoff election in Georgia, Republicans will still control the Senate, and Mr. Biden’s ability to use the CRA will be limited. Mr. Trump, by contrast, was able to reverse 14 Obama-era rules in his first four months in office, as the Republicans then controlled both houses of Congress.

Today, the flurry of so-called midnight regulations being set in motion by the Trump administration adds yet another head-spinning dimension to a transition that is already marked by tumult. One factor may be that Mr. Trump appeared unprepared to lose the Nov. 3 election.

“The rules issued between now and inauguration may be more haphazard than in previous administrations, in part because President Trump is generally less disciplined than his predecessors,” writes Susan Dudley, director of the George Washington University Regulatory Studies Center, in an email.

What’s more, because the last three administrations knew their time in office would end after a second term, they also had time to focus on finishing their highest-priority actions, adds Ms. Dudley, former head of the Office of Information and Regulatory Affairs during the second Bush administration.

Since Election Day, Mr. Trump has also taken numerous foreign-policy steps whose goals or implementation don’t necessarily mesh with those of the incoming Biden team:

Announced troop level cuts in Afghanistan and Iraq.  The formal exit of the United States from the so-called Open Skies Treaty, which allows Russia and the West to engage in reconnaissance flights over each other’s territories. Rejoining the treaty wouldn’t be simple. The U.S. has moved to get rid of the special planes it used to carry out surveillance.  Arms sales to the United Arab Emirates worth $23 billion, which could alter the balance of power in the Middle East.  Added sanctions on Iran that would make it harder for the United States to rejoin the Iran nuclear deal.

Despite all the postelection drama, which began when Mr. Trump decided to contest the results and refused to allow the formal transition to begin, the process now appears on track. On Nov. 23, nearly three weeks after the election, the Trump administration “ascertained” Mr. Biden as the apparent winner, allowing for the release of federal funds and sharing of information with the incoming Biden team – including on the pandemic and plans for distribution of vaccines.

Experts on presidential transitions say the three-week delay was unfortunate but not as damaging as the one in 2000, which lasted six weeks.

Mr. Marchick says the transition so far has gone “very well.” His organization works with the three key stakeholders: the Trump White House, the agencies responsible for transition planning, and the Biden team.

Experts also credit the Trump administration for being ready – before the election – to carry out a transition, including preparation of briefing books. But once the election had taken place, followed by numerous efforts to overturn the results in key states, partisan hackles were raised – hardly a surprise in this era of anger and division.

And so the transition, too, fell prey to those sentiments.

“I’m not surprised this transition is angry and bitter, and that the outgoing administration will try to leave political hand grenades everywhere they can,” says Jeffrey Engel, founding director of the Center for Presidential History at Southern Methodist University in Dallas. “But it’s hardly the first or even the 10,000th example of the norms of civility breaking down in our politics.”