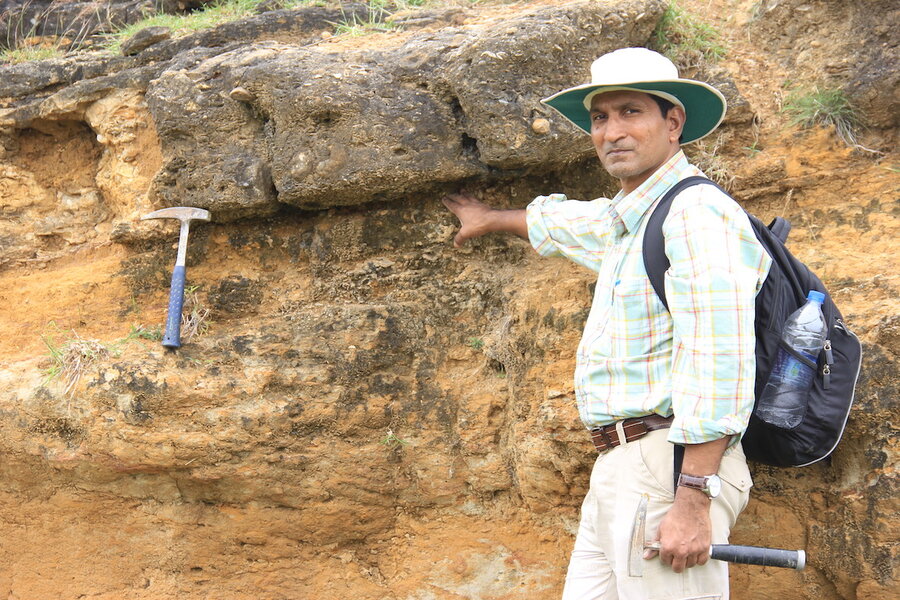 The Indian subcontinent, which collided with Eurasia about 10 million years after nonavian dinosaurs went extinct, is home to fossils found nowhere else, including the 80-ton Bruhathkayosaurus and the chicken-sized Alwalkeria.

The first dinosaur bones in Asia were found in India by a British captain in one of the East India Co.’s armies in 1828, in Jabalpur, thirteen years before the word “dinosaur” was coined. Ever since then many bones, nests, and eggs have been found across the country.

India has passionate amateur fossil collectors like Vishal Verma, a high school physics teacher, who has rescued dozens of fossilized dinosaur nests and eggs and rare extinct sharks in Bagh in the Narmada Valley, and Mohansingh Sodha, who has collected fossils for nearly 50 years.

Dr. Sahni grew up around talk of fossils and dinosaurs with his father, grandfather, and uncle, all eminent paleontologists. “India has the largest number of eggs and dinosaur nests from about 68 million years ago, deposited during a time of volcanic activity. We also have a lot of coprolites – fossilized dinosaur feces – which tells you what they ate and how they lived.”

He also worked alongside teams of German and American scientists at the Vastan Lignite Mine, in Gujarat, western India, since 2005. They found early mammals including horses and primates in these fossil-bearing layers, as well as several insects perfectly preserved in 50-million-year-old amber. “But the mine was closed down by the owner in 2015,” he says.

Such frustrations are common for paleontological sites in India, say experts.

“Many geologists have come back after several years to the site of a fossil find and found it flattened, or a dump yard,” says University of Delhi geologist Guntupalli V.R. Prasad, who was part of the team that unearthed India’s first Ichthyosaur remains.

“The main problem in India is that the desire for short-term commercial gains wins over the need for preservation of important sites,” Professor Prasad says. “In the Deccan Traps area, there is a spot showing layers of rocks with beautiful formations of lava flows, marine fossils and dinosaur nesting sites, but the site is being quarried, with apathy on the part of the government officials.”

Even legal protections aren’t always sufficient to protect these sites. In 1997, some 70 acres that covered the nesting sites were designated as the Balasinor Dinosaur Fossil Park. But with minimal security and policing, vandalism and looting of the fossils abounds.

“Many governments have talked about a well-curated national repository, but unless there is real political will backed by funds, nothing will happen. Strict laws should also be framed for theft, smuggling, procuring, and damaging fossils,” says Dr. Sahni.

Intergenerational continuity is also critical, says Sunil Bajpai, a vertebrate paleontologist at the Indian Institute of Technology, Roorkee, who in 2008 helped discover the closest land relative to whales, in Kashmir.

“The biggest problem before an Indian paleontologist is that when he leaves a university, the person who replaces him is not interested in his specimen collections or if he retires, the problem is, where does he deposit the finds,” Dr. Bajpai says.

“Young children should be educated on evolution and how long it took for something to come into existence, only then will they understand the need to preserve biodiversity,” he says.

“In spite of all the criticism about paleontology in India, the GSI [Geological Survey of India] is a storehouse of meteorites, fossils and bones of prehistoric animals collected over 150 years, and its extensive collections in Kolkata are available to researchers,” he says.

“All the discoveries and fossil finds are funded by government money and not personal property. One has to coordinate with the local government or museums and make arrangements to showcase it, when they leave a department or retire,” he adds. “Besides fossils, the excavation sites are very significant and should be preserved and showcased to the public.”

“What India needs is a grand vision,” says biochemist Pranay Lal, author of “Indica: A Deep Natural History of the Indian Subcontinent,” “a living, immersive museum or several small museums that harness the best of technology, and showcase its incredible treasures.”