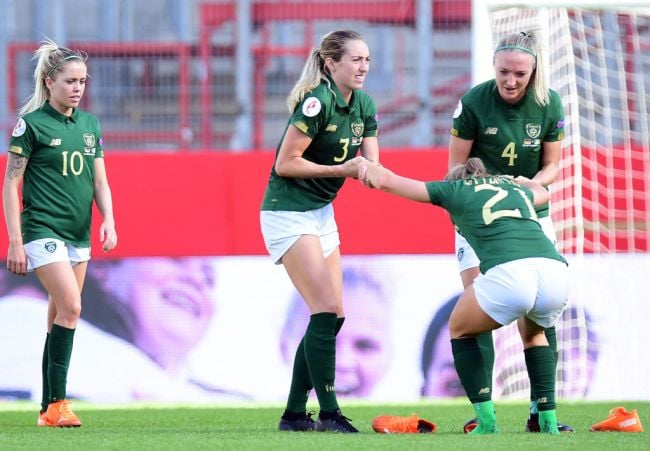 The Republic of Ireland are looking for a win this evening to keep their dreams of qualifying for their first major tournament alive.

It’s do or die for the Republic of Ireland this evening as Vera Pauw’s women face the daunting challenge of Germany in the UEFA 2022 Women’s Championship qualifiers.

The Republic currently sit second in Group I, trailing tonight’s opponents by eight points, while Ukraine have given them little breathing room with the gap to third being just a single point.

Three outcomes would see the Republic of Ireland place second in their group; if both teams draw their final game, if Ukraine lose, or the holy grail- the Republic beat the two-time World Cup winners.

Two of those options place a great amount of faith in the hands of Montenegro, who go to the Ukraine in search of their first win of the qualifiers.

Although an assist from Montenegro would not be turned away, Pauw has made it clear, her squad are focusing on what they can control- putting in a strong performance at Tallaght Stadium this evening.

A delay in the return of Covid test results to the team yesterday put the breaks on the final squad announcement, but the FAI have confirmed that all tests have since returned negative.

In their last encounter, Pauw’s side lost 3-0 away, in what was considered a positive result against of one the best teams in the world.

The Republic’s 1-0 loss to Ukraine back in October was also a difficult blow for the squad, setting back their hopes of qualifying for their first major tournament.

If the girls in green keep a hold of their second place finish, they will head to the play-offs as only the top three second-place qualifiers gain automatic qualification.

Also tonight, Northern Ireland play the Faroe Islands in Belfast at 7pm, securing their place in the play-offs if they manage the win, which looks likely.

Similar to the counterparts south of the Border, Kenny Shiels’ side are also currently second in their group, but face the much more enviable task of the evening as Faroe are yet to seal a win.

The Republic of Ireland’s game will be shown live on RTÉ Two with kick-off at 5pm.