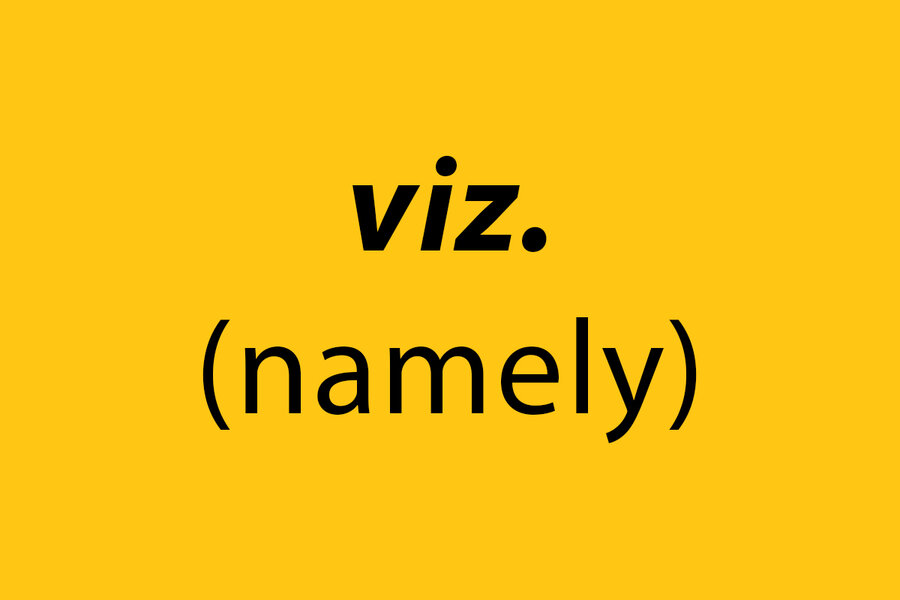 Three Latin abbreviations cause no end of confusion in English, viz. i.e., e.g., and viz. itself. I had to think carefully about the correct way to use viz. here, because it is an abbreviation I have often read – 18th- and 19th-century texts are chock-full of viz. – yet never before employed. I.e. and e.g. can be confounding enough, without bringing viz. into it. They are “frequently confused even by the most conscientious writers,” according to Merriam-Webster.

The three abbreviations seem to have appeared in the 15th and 16th centuries, when English speakers were in the habit of poaching terms from Latin legalese. E.g. (exempli gratia, “by way of example”) is by far the most popular today, according to Google Books Ngram Viewer. It is basically a fancy way to say “for example” as it is used to introduce specific examples of a more general topic or point: “She trains big dogs, e.g., Great Danes, mastiffs, Rottweilers.” E.g. always implies that what follows is not an exhaustive list – our trainer might also work with, say, Irish wolfhounds – so it is redundant to conclude with “etc.” or “and so on.” If you’re trying to figure out whether it’s the right abbreviation for your sentence, this mnemonic might be helpful: e.g. equals “example given.”

I.e. stands for id est, “that is.” In English it is best translated as “that is to say,” as in “My dog is a typical Great Dane, i.e., large, loyal, and friendly.”  According to Fowler’s Modern English Usage, i.e. introduces “another way … of putting what has already been said.” It is a restatement of what has come before. This can trespass into e.g.’s territory, when the restatement comprises a comprehensive list: “She trains big dogs; i.e., Great Danes, mastiffs, and Rottweilers.” In this case, i.e. indicates that she trains only these three dog breeds. The mnemonic I like for i.e. is “in essence.”

Then there is viz., short for videlicet (“it is permissible to see” in Latin; pronounced vi-DEL-i-set), which was once the most popular of these abbreviations. In 1810 it was used about 10 times more frequently than either i.e. or e.g., appearing not just in scholarly treatises and legal briefs but in personal letters and diaries. Writers sprinkled it so liberally across their compositions that modern mavens have a hard time pinning down rules for its use. Like i.e., viz. can preface an exhaustive list, so the University of North Carolina writing center calls it “a stronger version of i.e.” But others stress differences between the two, finding that where i.e. paraphrases its antecedent, viz. clarifies it or adds more detail.

What most modern experts do agree on is that viz. has had its day. I.e. and e.g. are enough to handle by themselves. As language expert Brian Garner jokes, “How does one pronounce viz.? Preferably by saying ‘namely.’”