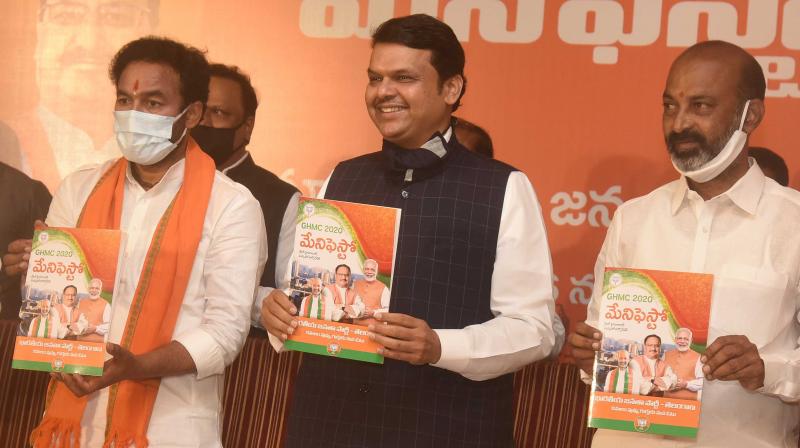 Hyderabad: The seemingly unstoppable BJP on Thursday promised that free Covid-19 vaccines will be given to every single person throughout the GHMC area and that no one will have to go to a private hospital for vaccination.

Speaking on the occasion, Fadnavis said that if the BJP comes to power, Hyderabad Liberation Day will be celebrated officially. He said the entire country got Independence on August 15, 1947, but the erstwhile Hyderabad state got it on September 17, 1948.

The BJP also promised that the Land Regularisation Scheme (LRS) initiated by the TRS government would be scrapped.

*Corona vaccine and testing to all as per Central government stipulations.

*Setting-up of exclusive primary health centres (PHCs) in consonance with the population of various locations in greater Hyderabad.

*Will scrap LRS to redeem people of greater Hyderabad from `15,000 crore burden.

*Free travel to women commuters in metro and city buses in Hyderabad.

*Free tabs to all children from poor families. Quality WiFi will be provided to poor families to enable student’s access online education.

*Waiver of property tax in all SC colonies and slum areas. Free permission for construction of houses in less than 125 sq. yds. plots.

*Free power to all houses using less than 100 units per month. Free power and loan facilities to all professions in traditional occupations.

The election was almost entirely peaceful. What happened?