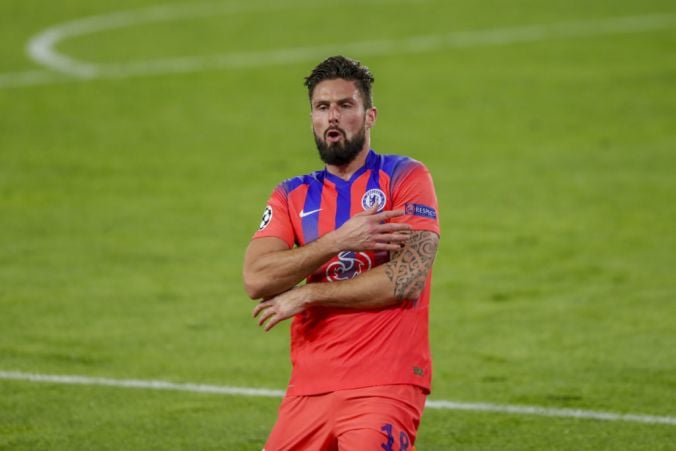 Olivier Giroud completed a perfect hat-trick and then fired a penalty to boot as Chelsea thrashed Sevilla 4-0 to win Champions League Group E with a game to spare.

Giroud delivered left-foot, right-foot and headed finishes for the perfect treble – and then whipped a spot-kick into the top corner for good measure.

Chelsea will host Krasnodar at Stamford Bridge next week, but sealed top spot with their win in Spain, and a potentially easier tie in the last-16.

Giroud put the squeeze on Blues boss Frank Lampard to hand the France striker a Premier League start against Leeds on Saturday, once again proving his clinical credentials.

The 34-year-old’s added-time header dug Chelsea out of a hole in Rennes last week, with the Blues snatching a 2-1 win at the death in France.

World Cup-winner Giroud could consider a move away from Chelsea in January in a bid to cement his place leading France’s attack at next summer’s European Championship.

Lampard is desperate to keep Giroud at Stamford Bridge, admitting last week in the wake of that late winner at Rennes that he remains central to his plans.

But Giroud has slipped behind Tammy Abraham and £53million summer arrival Timo Werner in the pecking order of Chelsea’s strikers.

And the west Londoners fully vindicated that rotation – most of all Giroud – as Chelsea extended their unbeaten run to 15 matches in all competitions.

Giroud provided the perfect start by scooping home a lovely finish, capping a quick counter-attack with just two touches to find the net.

Giroud checked the defence with a smart first touch, before calmly slotting home with his left foot.

The fit-again Christian Pulisic consistently agitated to drag the Blues further into the ascendancy, but the USA forward’s slight rustiness stymied a number of promising openings.

Pulisic’s frustrations were writ large across his face as the half wore on and the chances were wasted.

The former Borussia Dortmund winger saw a low shot saved when Chelsea had a posse of men lurking in the centre of the box.

From the corner though, Nemanja Gudelj was forced to clear off the line after a powerful header from Toni Rudiger.

Chelsea carried that early lead into the break without ever coming under extended pressure.

Lampard’s men slipped off their early clinical pace, but were still in the ascendancy at the interval.

Gudelj forced a good save from the ever-impressive Mendy to open the second half.

But just as with the first period, it was to be the visitors who forced a breakthrough.

And once again the imperious Giroud delivered the telling blow, this time dinking home with his right foot for a finish that even bettered his opener.

Still not sated by his first two goals, Giroud then ensured he would head home with the match ball – nodding in from replacement N’Golo Kante’s accurate cross.

Giroud then found time to win and convert a late penalty, to add even further gloss to his night.