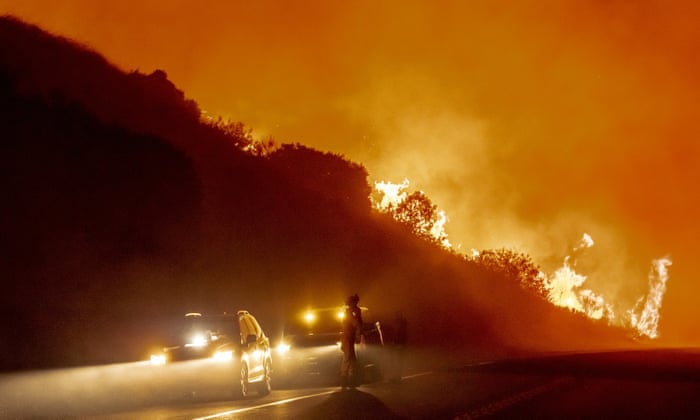 Powerful gusts pushed flames from a wildfire through southern California canyons on Thursday, as several blazes burned near homes and forced residents to flee.

The fire began at a home late on Wednesday and quickly spread to tinder-dry brush. The so-called Bond fire exploded in size throughout the night and as the sun came up, an enormous plume of smoke was visible for miles.

Firefighters struggled in steep terrain amid unpredictable Santa Ana winds that have raised fire danger for much of the region.

“When crews arrived, it was a fully engulfed house and the winds were extremely strong and they pushed flames into the vegetation,” said Colleen Windsor, a spokeswoman for the county’s fire authority.

Capt Thanh Nguyen of the Orange county fire authority said crews were scrambling to stay ahead of flames that jumped major roads.

“We’ve seen the wind change also drastically, so that’s what we’re telling all our personnel to be aware of – that constantly changing wind,” he told CBS LA TV.

Evacuations were ordered for several canyon neighborhoods near the city of Lake Forest and residents of other nearby areas were told to be ready to get out. It was not immediately known how many people were affected or if any homes were damaged.

The Bond fire is burning near the area of October’s Silverado fire, which forced tens of thousands to evacuate.

Ryan Kayrell fled the October fire with his wife and two young children. But the family stayed at their home in the community of Foothill Ranch on Thursday morning even though it lies in a very smoky mandatory evacuation zone.

The family’s bags were packed as they waited to see which way the flames moved, Kayrell said. “A lot of the hillside immediately behind my house is already burned, so we’re hoping that’s a buffer. Which isn’t to say that there’s no danger. The concern is that embers could fly into the neighborhood.

“If there are fire trucks on our street, we’re going,” he said.

The new blazes broke out as most of the region faced an elevated fire risk that prompted utilities to cut off power to hundreds of thousands.

Red flag warnings of extreme fire danger through Saturday were in place because of low humidity, bone-dry brush and the winds, which sweep down from the interior, the National Weather Service said.

Utilities in the populous region began cutting power on Wednesday to customers as a precaution to prevent gusts from blowing tree limbs into electrical equipment or knocking down power lines, which have sparked devastating wildfires in recent years.

Southern California Edison cut power to about 15,000 homes and businesses by late Wednesday night and was considering de-energizing lines serving about 271,000 customers in seven counties throughout the windy period, which could last into Saturday. It was one of the utility’s largest precautionary blackouts.

San Diego Gas & Electric pulled the plug on about 24,000 customers by Wednesday night with another 73,000 in the crosshairs. “We recognize losing power is disruptive, and we sincerely thank our customers for their patience and understanding,” the utility said.

A blaze on about 15 acres (6 hectares) in in San Diego county threatened about 200 homes and officials were working to evacuate them, said Capt Thomas Shoots with Cal Fire, California’s state firefighting agency.

Nearby apartments were under evacuation advisories. The fire reported late Wednesday had damaged some homes, KGTV reported.

California has already experienced its worst-ever year for wildfires. More than 6,500 sq miles (16,835 sq km) have been scorched, a total larger than the combined area of Connecticut and Rhode Island. At least 31 people have been killed and 10,500 homes and other structures damaged or destroyed.