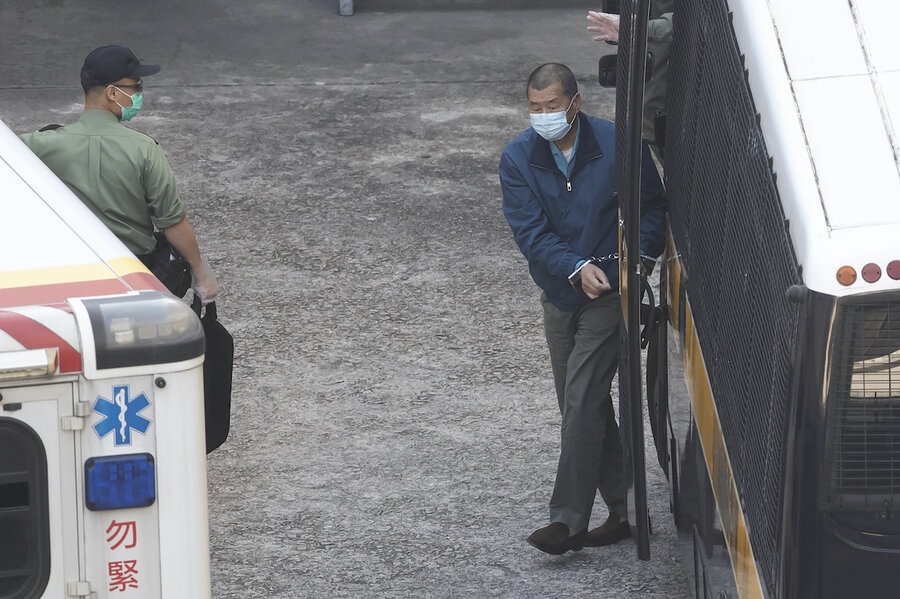 Outspoken Hong Kong pro-democracy advocate and media tycoon Jimmy Lai was refused bail on Thursday on a fraud charge amid a growing crackdown on dissent in the semi-autonomous city.

Mr. Lai, of Next Digital, which publishes the Apple Daily newspaper, was previously among 10 people arrested Aug. 10 on what police said was suspicion of violating a national security law and collusion with a foreign country. Mr. Lai had been released on bail in that case, but two months later police raided his company’s offices and took away documents.

On Wednesday, Mr. Lai and two Next Digital executives were charged with fraud over accusations that they violated lease terms for Next Digital office space. Mr. Lai appeared in court Thursday and was denied bail. His case has been adjourned until April 16.

Mr. Lai’s arrest comes a day after the jailing of three prominent Hong Kong pro-democracy activists – Joshua Wong, Agnes Chow, and Ivan Lam – who were sentenced to prison on Wednesday for a protest outside police headquarters as authorities stepped up a crackdown on opposition to tighten control by Beijing over the territory.

Mr. Wong, Ms. Chow, and Mr. Lam are among more than 10,000 people who have been arrested since June 2019 on charges related to protests against a proposed extradition law, which expanded to include demands for greater democracy.

Beijing responded to the protests by imposing a sweeping national security law to crack down on dissent, prompting more public opposition.

The British government had slammed Mr. Lai’s August arrest and said the security law was being used to crush dissent.

The law is “being implemented in a way that undermines freedom of speech,” the British government said in a report this month on the status of the 1984 agreement for Hong Kong’s return to China.

“It is imperative that this freedom is fully respected,” the report said.

Mr. Lai was also arrested in February and April this year on charges of taking part in unauthorized protests. He also faces charges of joining an unauthorized vigil marking the anniversary of the June 4, 1989, crackdown on pro-democracy protests in Beijing’s Tiananmen Square.

Mr. Wong is known abroad for his role as a student leader of the 2014 “Umbrella Revolution” protests in Hong Kong. He was sentenced to 13 1/2 months in prison after pleading guilty to organizing and taking part in the June 21, 2019, demonstration outside Hong Kong’s police headquarters over the extradition bill and police use of force against protesters.

The crackdown has prompted accusations Beijing is violating the autonomy it promised when the former British colony was returned to China in 1997. It also has triggered warnings the ruling Communist Party is damaging Hong Kong’s appeal as a global business center and one of Asia’s most dynamic cities.

Hong Kong’s last British governor, Chris Patten, criticized the sentencing of the three activists, saying in a statement that it “is another grim example of China’s determination to put Hong Kong in handcuffs.”

Maria Adebahr, a spokeswoman for Germany’s foreign ministry, told reporters in Berlin that the sentences are “another building block in a series of worrisome developments that we have seen in connection with human and civil rights in Hong Kong during the last year.”

Amnesty International said the three “must be released immediately and unconditionally.”

“Once again, the government has used the politically motivated charge of ‘inciting others to protest’ to prosecute people who have merely spoken out and protested peacefully,” said the group’s Asia-Pacific regional director, Yamini Mishra.

“By targeting well-known activists from Hong Kong’s largely leaderless protest movement, authorities are sending a warning to anyone who dares openly criticize the government that they could be next.”

In Denmark, a Hong Kong pro-democracy activist and former lawmaker, Ted Hui, urged European nations on Wednesday to allow protesters in Hong Kong “a safe haven from the terror” of China’s Communist Party.

“The situation in Hong Kong is getting worse by the day and it is important that the world knows that Hong Kong is no longer a free city,” Mr. Hui said in an email to The Associated Press.