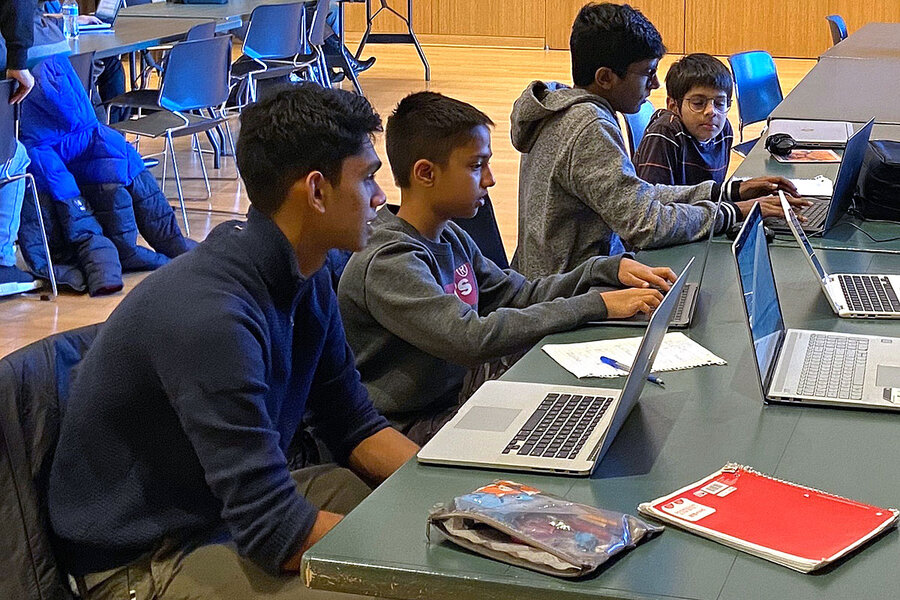 For the past two years, since fifth grade, Aarav Khatri woke up on the weekends excited for more classes.

Separate from his schoolwork, his weekend computer science classes – given for free by the nonprofit CS Remastered (“CS” for computer science) – were taught by local teen volunteers at a few libraries in central New Jersey. With the guidance of tutors and his laptop, Aarav unlocked a limitless world, where lines of code could identify prime numbers, design dictionaries, or spit out a Fibonacci sequence.

“It was quite fun knowing that in class we might be making something cool,” says Aarav, now 13, who studied with the program through the summer.

CS Remastered founder Samvit Agarwal took extra time to explain to Aarav the coding concept of recursion – something even college students are still learning. It took two or three private lessons with exercises that increased in difficulty, but Aarav eventually nailed it. Because, he says, Samvit was “very patient … very good at explaining stuff.”

Samvit’s brand of patience is the root of the program that brings computer savvy to kids through individualized attention they may not get in school.

Samvit, a 17-year-old high school senior, is a computer science ace, a programming polyglot who started the volunteer teaching program in 2018. And he has grown it into a service for 300 kids like Aarav, with 250 volunteer tutors.

As much as Samvit likes challenging himself, he says his program focuses on “helping out some of the kids around me.”

The impulse to serve others is driven in part by the Hindu community spirit of his upbringing, Samvit says. He plans to focus on creating social impact in college as he studies computer science and business further. He’s already thinking about the possibility of opening up another CS Remastered chapter wherever he moves next.

Samvit describes a life steeped in technology. Raised between his parents’ Indian homeland and the United States, he has observed their software consulting careers and takes part in dinner conversations about technology’s impact on the world. He describes an “aha” moment in fourth grade when a robot he built over the course of a month from a Lego Mindstorms kit whirred to life on his bedroom floor.

“It was pretty amazing to see it walk,” says Samvit. By the age of 12, he had started a YouTube channel meant to help friends and family with their technical issues. His how-to tech videos, which feature steps for resetting passwords on a range of devices, have attracted more than 14,000 subscribers.

Sanyukta Agarwal describes her son as very independent. “And like any teenager he does not like mom or dad asking him too many questions,” she wrote, punctuating that with a smiley face emoji, in an email to the Monitor.

During middle school, Samvit taught himself the programming language Python after school. He has since picked up Java, HTML, CSS, and Javascript through school and other training. If others consider the field purely technical, he sees it more in terms of creativity.

“If I have an idea, I can actually form it in front of me through code,” he says in his rapid-fire way, as if typing out his thoughts. “I think that’s pretty amazing.”

After Samvit started winning hackathons, Ms. Agarwal, his proud mom, began reaching out to friends in the neighborhood and offering Samvit’s help with their kids’ computer science projects. He says the idea for the nonprofit brewed over time as he began teaching younger peers. First he identified a need: tailor-made lessons for the individual. Available online resources and group-lesson formats “weren’t really structured to fit every individual,” he says.

Drawing on his “comp sci” courses at school, he started developing curricula focused on one-on-one tutorials for kids 10 to 16. Students choose whether they want to start studying Python or Java. Though the coding lessons are preplanned, instructors adjust to each learner’s speed.

“The entire idea is to make it as flexible or as adaptable to each student as possible,” Samvit says.

He recruited fellow high schoolers to teach and registered the nonprofit with the state of New Jersey in autumn 2018.

Without a budget, Samvit and his fellow instructors began tutoring at local libraries. An adult had to chaperone and “make sure they put the tables and chairs back,” says Ms. Agarwal. (After countless parent-chauffeured rides to these sessions, the nonprofit president recently earned his driver’s license.)

Classes moved remote during the pandemic on the virtual platform Discord, which allows for breakout rooms. Since the instructors themselves are still in high school, once the school year began, all tutoring moved to weekend sessions. CS Remastered is seeking funding, mainly to buy its most disadvantaged students laptops for lessons. It’s also adding partners, including nonprofits Girls Who Code and HomeFront NJ, which works to curb homelessness and for whom Samvit’s team has offered lessons.

CS Remastered has opened four chapters in the U.S., one in India, and one in China.

“We thought if it’s working here, it definitely does have the prospect to work in a lot of other places across the world,” says the Gen Z founder.

On an October evening, fall leaves cast a golden glow through the windows of the Agarwals’ living room, where they’ve gathered for a socially distanced interview. After virtual work and school days, Samvit and his parents usually convene for dinner, prayer, and recently movies from the ’90s.

Ms. Agarwal encourages this togetherness. She acknowledges her son’s work ethic, but wishes he’d slow down. Samvit has been juggling senior year and the nonprofit and a comp sci class at Princeton University, since he exhausted course offerings at his public high school. He keeps other coding-related passion projects spinning on the side.

Ms. Agarwal says her son is committed to whatever he takes on: “I’ve sometimes seen him up till almost 2 in the night …”

“No, that’s like very rare,” Samvit counters from the couch. He claims his max is midnight.

Samvit says his desire to pay it forward is partly influenced by his Hindu background: “That’s kind of something that I guess I’ve been brought up with – that idea of good karma, of giving back to the community.” Each family member wears red mauli thread around a wrist: a reminder of faith and invitation for blessings.

Tutors receive as much as they give

CS Remastered has benefited students and tutors alike. Amisha Singh, a high school senior who started as one of CS Remastered’s tutors this summer and doubles as the media manager, is part of the nonprofit’s effort to involve more young women.

“I think in general young women aren’t made to feel like they could be good at STEM or computer science,” Amisha says. But imparting her knowledge through tutoring, she adds, “has helped me get over my impostor syndrome. … It’s made me more confident in my abilities.”

Parents of the program’s students see that confidence shine through to their own kids. The receptivity generated by the peer-to-peer coaching, says Aarav’s dad Maneesh Khatri, is the program’s strength. “With kids, they’ll listen to others more than their parents,” says the software engineer.

Jyotima Prasad – a life coach whose son and daughter both have studied with Samvit – also heaps praise on the model. “I always feel that giving back and volunteering, it always takes a very good heart, compassionate heart, and going beyond yourself,” she says. “Those kinds of qualities in such a young kid … it’s a very good thing.”