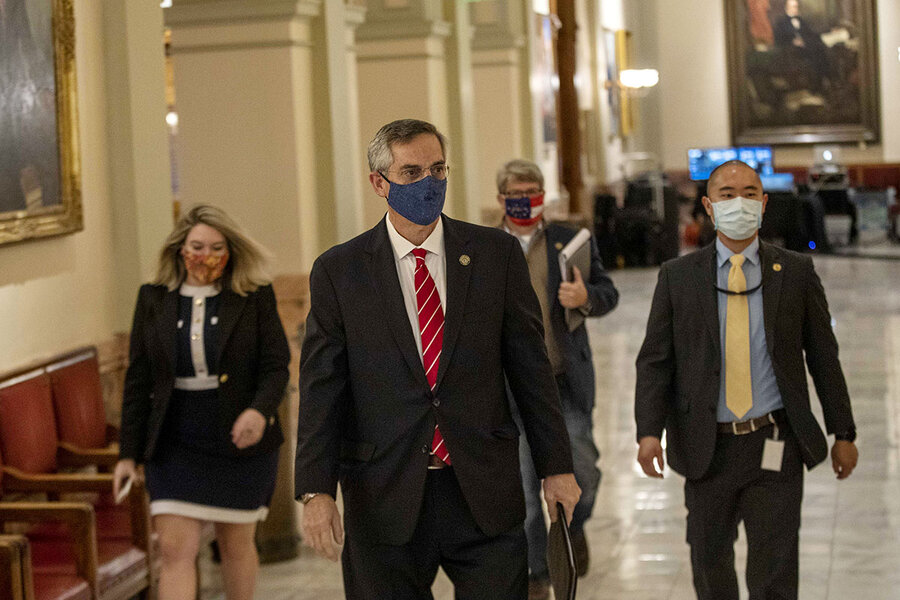 President Donald Trump is heading to Georgia on Saturday to campaign alongside the two Republican senators who face runoff elections on Jan. 5 – crucial races that will determine control of the Senate.

But some Republicans are unhappy with President Trump. He still hasn’t publicly conceded the Nov. 3 presidential race, and is still tweeting unsubstantiated claims of “massive voter fraud” – or “FRAUD!,” as he put it today. These claims risk discouraging Republican turnout in Georgia, GOP strategists say. After all, if the system is rigged, why bother to vote?

In Georgia, leaders are also angry that Mr. Trump has not disavowed the threats of violence – including death threats – against election officials in the state.

Mr. Trump, in fact, has exasperated many top (pro-Trump) Republicans in Georgia – including Gov. Brian Kemp and Secretary of State Brad Raffensperger. The latter is adamant that he ran a clean election and that the president lost the state, the first time Georgia voted for a Democrat since 1992.

In addition, U.S. Attorney General William Barr told the Associated Press on Tuesday that he saw no widespread fraud in the election.

And therein lies the conundrum Mr. Trump may face on Saturday. If he still hasn’t acknowledged by then that he lost the election, he can’t argue that sending both senators back to Washington is essential to keeping GOP control of that chamber.

As things stand now, the next Senate has 50 Republicans and 48 Democrats. The Republicans need to win just one of the seats, and they’ll keep the majority. If the Democrats win both, that creates a 50-50 Senate – setting up Vice President-elect Kamala Harris as the tiebreaker.

Both seats are up this cycle, because Sen. Kelly Loeffler is an appointee filling the seat of GOP Sen. Johnny Isakson, who retired early for health reasons; Sen. David Perdue’s seat is on its regular cycle. Neither incumbent won a majority on Nov. 3, sending each race into a runoff between the top two finishers.

Making things worse for the Republicans, some activists on social media – including Parler, the new conservative, “freer speech” alternative to Twitter – are urging Georgia Republicans to boycott the election. Just as disastrously, some suggest writing in Mr. Trump. There’s no option for write-ins in a runoff, and writing “Trump” in the margins risks spoiling a ballot.

Observers will also be watching Mr. Trump on Saturday for clues that he might run again in 2024 – as he has reportedly hinted privately. But that’s a topic for another day.

Americans across the country build desks for students learning from home