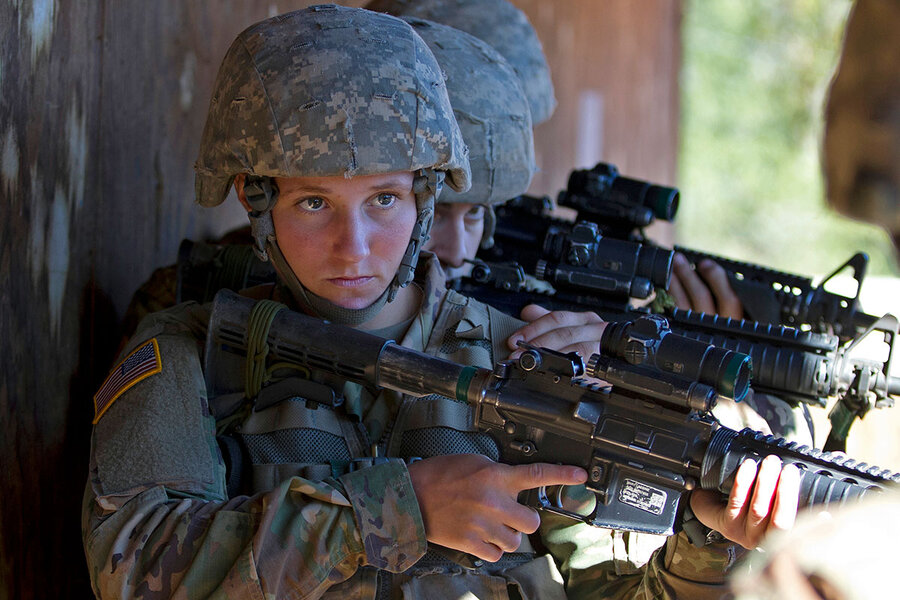 Early on in the project, their findings were so unequivocal that they decided to ask more questions. What would happen, for example, if women were dying in greater numbers? But whether the hypothetical combat fatality was a man (Todd Ryan) or a woman (Molly Ryan) – and whether one woman died or a dozen – support for the war remained the same.

The study should “put to bed the argument that women serving and sacrificing in these roles will be harmful to leaders’ ability to wage war,” Dr. Cohen says.

It seems like a point that should have been shelved long ago, particularly given that 173 American servicewomen have died for their country since 2001 without the wars grinding to a halt, notes retired Col. Ellen Haring, a 1984 West Point graduate who, in 2012, sued the Department of Defense for its combat exclusion policy. Still, she adds, “I wish this study would have come out five or 10 years ago.”

Combat sacrifice but not “first-class citizenship”

In addition to the argument that women should be protected from fighting wars due to their inherent weakness, in the early days of women in combat, the study notes, there was concern among advocates that detractors could interpret the death of female soldiers as confirmation of their unfitness for the front lines, their dying as evidence of poor performance in battle.

That argument never gained much traction, but American women in combat remained a touchy subject. In 2018, for example, then-Secretary of Defense James Mattis told an audience at Virginia Military Institute that infantry troops are “necessarily macho” since war is “the most primitive – I would say even evil – environment.” In that context, he added that the “jury is out” on whether women can make the U.S. military more combat-effective.

This was three years after the Pentagon opened all combat jobs to women – including the infantry and special operations forces – and three years after the first women graduated from the Army’s grueling Ranger School. Today, some 50 women have earned their Ranger tabs, and there are nearly 1,000 women serving as infantry soldiers, tankers, and cavalry scouts, front-line jobs previously closed to them.

As women have moved into these jobs, the hope among advocates has been that respect for them might grow in the eyes of their fellow countrymen, creating a path to, as the study puts it, “first-class citizenship.” Dr. Cohen and Dr. Huff, now an assistant professor of political science at Rice University in Texas, along with their co-author Robert Schub of the University of Nebraska-Lincoln, looked into this, too, collecting data on whether, according to the study, women “fighting on the frontlines and making heroic sacrifices in combat” might have “broad implications for women’s equality.”

It doesn’t appear to, at least among men. “We don’t find evidence of a massive shift in thinking about what women are capable of doing, even after serving and sacrificing in these heroic ways,” Dr. Cohen says. “On a personal level, that was a depressing finding for us.”

As the study puts it, “Combat service – and indeed, combat sacrifice – alone appears to be insufficient to yield women ‘first-class citizenship’ among the U.S. public that the most ardent supporters hope to achieve.”

Military women serving in these roles often take pains to emphasize that they are not doing it to garner special kudos, or even to make a statement – other than that they want to fight in the same way their male counterparts do. Still, the finding is “very disappointing,” Colonel Haring says.

Among women, however, the study’s findings were different. Hearing about women serving and dying in combat did seem to boost support for women’s equality among other women. This included, for example, creating more positive views of women’s fitness for leadership.

There appears to be a “kind [of] aspirational effect on women,” Dr. Cohen says, noting that a number of studies have shown that if there’s a female instructor for an introductory economics class, for example, more women tend to declare an economics major, “but it doesn’t have that effect on men,” she adds. “Seeing someone like you do something inspiring or heroic has an effect on similar people.”

This may have had something to do with the fact that women who served in the military ran for elective office in larger numbers than ever before in both the 2018 and 2020 elections, the study argues: “Having status as a veteran increased public perceptions of the legitimacy and authority of female candidates.”

And though women in combat may not have an immediate impact on how men view women’s equality, it may over time, Colonel Haring says. “Look, 100 years ago, it would have been inconceivable for a woman to command a Navy ship. Now it’s not even blinked at,” she adds. “I also know we have a lot more male champions today than when we came into the Army – it can just take time.”

The Georgia conundrum and what it says about Trump