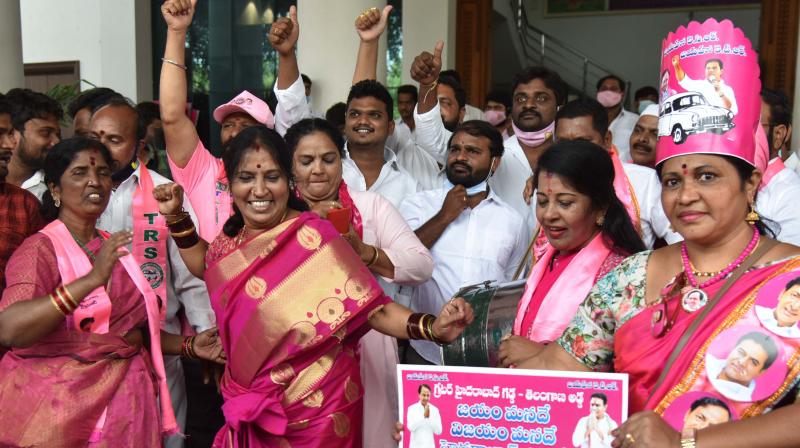 Hyderabad: The TRS won 55 seats and emerged as the single largest party in the GHMC Council, though its tally plunged from 99 seats in 2016. Party working president K.T. Rama Rao pointed out that the party had the most seats, and thanked the people for voting for the TRS.

The day belonged to the Bandi Sanjay-led BJP which won 48 wards, up from just four in the 2016 elections. Speaking after the victory, Sanjay called it a “saffron strike”. The results proved true the prediction of Union minister of state G. Kishan Reddy on polling day that there was a “silent vote” in the party’s favour.

The AIMIM retained its hold on the Old City, winning 44 wards, the same as in 2016, but pushed to the third spot by the BJP. The Congress tally remained at two seats.

Given the outcome, the TRS may have to take the support of the MIM to get its mayor and deputy mayor elected, or may have to share the posts.

Counting in the Neredmet ward was put on hold due to a High Court direction with regard to the polling. The poll officials had noticed that a majority of votes did not carry the Election Commission-specified mark. The TRS was leading by 505 votes when counting was put on hold.

Most of the early postal ballots went in favour of the BJP. When the votes polled in the ballot boxes were counted, the TRS mostly stayed ahead. By the afternoon, the TRS was leading in 70-plus wards but its tally stopped at 55.

The ruling party retained most seats in the Kukatpally, Qutbullapur, Serilingampally and Sanathnagar Assembly constituencies. The BJP did well in the LB Nagar, Musheerabad and Goshamahal constituencies as well as Uppal, LB Nagar and Maheshwaram.

The wards in the core city were shared almost equally between the TRS, the BJP and the MIM.

The MIM retained most of its wards in its stronghold of seven Assembly segments including Charminar, Karwan and Chandrayanagutta which are part of the Lok Sabha constituency of party president Asaduddin Owaisi. The party had won more than 40 wards in the 2010 and 2016 GHMC elections.

The TRS won a considerable number of  wards in the Secunderabad Lok Sabha constituency represented by Union minister of state G. Kishan Reddy.

The TRS had planned to use its 34 ex officio members to get its mayor elected, if its tally fell to 75-plus seats. Since it has won only 55 wards, its only option is to enter into a post-poll alliance with the MIM and share the two posts.

The BJP has decided to sit in the Opposition in the GHMC council as the party does not have the required numbers to claim the key posts.