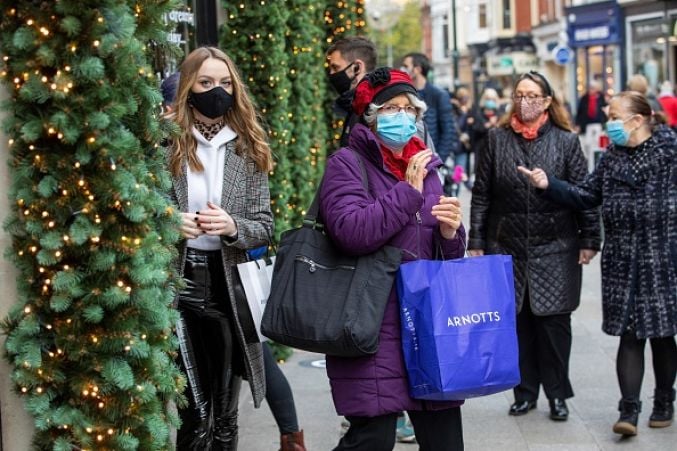 Growth in the quarter was driven largely by increases in personal spending. Photo: Paul Faith/AFP via Getty

The Irish economy rebounded sharply in the third quarter of 2020, growing by a near record 11.1 per cent.

Activity in the distribution, transport, hotels and restaurants sector, which had been severely impacted by the initial lockdown, grew by 46.9 per cent.

On the consumer side, personal spending on goods and services grew by 21 per cent in the quarter. This tallies with a sharp uptick in retail sales seen over the same period as consumer activity resumed.

The rebound may, however, be short-lived with the reintroduction of Covid-19 restrictions in the fourth quarter expected to curtail economic activity again.

Overall, GDP, the standard measure of growth, is estimated to have increased by 11.1 per cent between July and September, driven largely by the increases in personal spending.

Responding to the figures, Minister for Finance Paschal Donohoe said: “This bounce-back was to be expected following the sharp hit seen in the second quarter, and is in keeping with patterns seen in other countries.”

He said the numbers “very much highlight” the dual economic impact of the pandemic, with net exports making a significant positive contribution to GDP in year-on-year terms on the back of robust growth in pharma exports, while the domestic economy still lags in annual terms.

Was Black Friday a bust for businesses?